Posted in: No Huddle by Jonathan Foster on February 16th, 2013 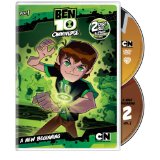 “When lives are on the line, it’s hero time!”

What would you do if you had a gadget that allowed you to transform into different alien creatures? Think about it. If a good and virtuous person found it, they would use it to help others and protect the planet. If it fell into evil hands, they would use it to gain power and cause havoc. Everything comes down to the question of how that power is used. Unfortunately for Earth, Ben Tennyson found the alien gadget in question.

Ben 10: Omniverse revolves around 16-year-old Ben and his fight against alien criminals with help from a device called the Omnitrix. Not only does Ben have to deal with the bad guys, he has to break in a new partner, an eager young alien appropriately named Rook.

The reason I say “unfortunately” is because Ben is quite possibly the worst cartoon hero I’ve ever seen. For starters, Ben is a bit of an elitist jerk. He’s always bragging about how he’s a superhero and Rook is “just a cop.” Ben always comments about how he’s better than the aliens. This may just be extreme trash-talking, but it also makes him seem borderline racist. Not exactly a good role model for kids. Also, he’s had the Omnitrix for six years and still doesn’t know how to work it properly. It’s like watching an animated version of Greatest American Hero. You’d think after having the Omnitrix for six years and having the support of the alien race who built the technology, he’d at least know how to get the transformation he wanted. The first time he gets the wrong transformation, it’s kind of funny. After that, it’s just boring.

That leads me to the next problem with this show: it’s extremely formulaic. It’s not that hard to predict what will happen in each episode after Ben meets the bad guy: he transforms into the wrong creature, gets smacked around by the Big Bad for a bit, gets bailed out by someone (usually Rook), then somehow overcomes the situation and just barely manages to beat the bad guy. Each of the 10 episodes on this two-DVD set follow this pattern. I don’t think this would entertain kids for long, and it would probably bore any poor adult watching with them to tears.

The third and final strike against this show is the puns: the god-awful, groan-inducing puns. They’re so bad; I swear David Caruso wrote them. For example, after removing an alien power suit’s battery, Ben says, “No charge.” Ugh! A pun once in a while is ok, but they’re in every episode. I guess kids may think Ben’s puns are funny, but anyone out of middle school will just shake their head in disbelief.

Ben 10: Omniverse isn’t all bad, though. The animation is pretty good, especially during Ben’s transformation sequences. The aliens he turns into are actually cool, with Feedback and Bloxx being my personal favorites. There is some good humor, but it comes from Ben’s partner, Rook. Rook is very much like Sheldon Cooper in that he doesn’t get sarcasm and takes things way too literally. This lack of understanding leads to the few real gems of humor in the show, like when Rook calls Ben “Bendude” after Ben says, “Just call me Ben, dude.”

Overall, unless your child really, really likes this show, I’d pass on this DVD set. While Ben 10 has some good qualities, the bad ones far outweigh them. If you must watch this DVD set, rent it or borrow it from someone.