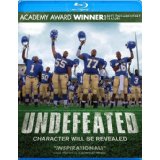 “You think football builds character? It does not; football reveals character.”

The open secret about sports movies is that they’re not really about sports. Most of the great ones use the games people play as a dynamic arena to tell universal stories about struggle, underdogs overcoming impossible odds, greatness and redemption. You don’t have to know a nose guard from a mouth guard to enjoy a football movie. By that same token, Undefeated may chronicle a grueling real-life high school football season, but I wasn’t surprised to see it play out like a lot of fictional sports flicks.

Last year’s Oscar winner for Best Documentary Feature — beating stiff competition from the likes of Paradise Lost 3: Purgatory and Pina — follows Manassas High School’s football team as it tries to win its first playoff game. (The North Memphis school was founded in 1899 and recently endured a decade-long stretch where they didn’t win a single game.)

The team is lead by ferociously devoted volunteer coach Bill Courtney, and Undefeated focuses on three Manassas players. There’s O.C. Brown, the mammoth, freakishly athletic senior left tackle who is assured a spot on a college football team if he could just pass his entrance exam. Montrail “Money” Brown is the undersized, sensitive senior right tackle who plays his heart out and does well in school. Finally, we meet Chavis Daniels, a junior linebacker and loose cannon fresh off serving a 15-month stint in a youth penitentiary.

Undefeated has a great cold open, as Courtney details how all of the calamities in a recent two-week stretch for Manassas High — losing players who have been shot or fought with coaches — are typically enough to fill a coach’s entire career. The film briefly touches on the economic factors leading to the depressed state of North Memphis and its high school, but eventually settles into a fairly straightforward narrative as we follow the team from its first practice to its climactic late-season game. Things don’t get off to such a hot start; their first opponent returns the opening kickoff for a touchdown.

A lot of the documentary plays out like a real-life version of season 4 of Friday Night Lights, when Kyle Chandler’s Coach Eric Taylor takes over lowly, underfunded East Dillon High. (Coincidentally, those episodes aired in 2009; the same year cameras were following around the Manassas Tigers.) Directors Dan Lindsay and T.J. Martin also seem to take some visual cues from the excellent NBC drama in their sideline-level presentation of games as well as the lingering, fragmented, hand-held camera work for the off-the field scenes. Both Undefeated and Friday Night Lights are probably more cinematic than you’d expect them to be.

Coach Courtney is easily the film’s most compelling figure as he repeatedly and selflessly goes above and beyond in his efforts to reach the players. (He also routinely goes into their homes and, in one instance, drives his truck on a sidewalk to have a conversation with one.) Courtney admits he thinks of them less as players and more like troubled family members — the coach’s own father left him when he was 4 — and his mission is to help them build solid foundations as men. I did feel the film somewhat soft-shoed the issue of how the coach’s intense devotion to Manassas High adversely affected his own family. (Courtney did point out the irony of missing so much family time in order to help high school kids with absentee fathers.) Then again, maybe his family really is supernaturally patient and understanding.

Out of the players profiled, the most compelling figure is kind-hearted Money because underdog tales are irresistible. The most compelling story is probably the redemption of Chavis, who is suspended from the team early on in the season. I just wish we had actually seen a bit more of his change in attitude rather than getting the results later on. Meanwhile, O.C. is easily the best player and the most stable documentary subject, which doesn’t exactly make for great drama. (It’s hard to make studying for the ACT look exciting.) The film, however, does give us a great profile of what it’s like for an injured player who feels detached from his team.

There are also a few conspicuous moments we weren’t allowed to see, including the Chavis blow-up that led to his suspension. Still, the off-the-field drama is more than enough to get you invested in whether or not Manassas High can achieve their on-the-field goals. Despite the fact that this is real life, you’ll find yourself rooting for that sports movie ending.

Undefeated is presented in an aspect ratio of 1.78:1. The 1080p image is arrived at with an AVC MPEG-4 codec at an average of 22 mbps. This isn’t the prettiest HD image in the world, which is perfectly fine for the gritty North Memphis story. The video presentation gives us a slightly muted color palette and a variety of nice details — including the bald patches on the football field’s grass — that convey the film’s unglamorous setting. There is also fine detail in the numerous close-ups, while the shaky hand-held camera work holds up quite well to scrutiny. As in most documentaries, video quality does vary from scene to scene — darkly-lit interior scenes are particularly problematic — but Undefeated’s rough, grainy visual presentation is a good match for its story.

The DTS-HD Master Audio 5.1 track brings the subs and rears to life whenever hip-hop music plays — which was more often than I expected — over practice montages or game footage. I do think the game scenes were a missed opportunity to incorporate more ambient noise from the crowd, players or sidelines. Instead, the rears are dominated by that generic hip-hop. Dialogue — particularly Courtney’s commanding voice, even when he’s speaking softly — comes through quite clearly, which makes the next issue particularly infuriating. All of Chavis’ and most of O.C.’s dialogue is subtitled. I understand the two students tend to mumble their words, but I found them each to be acceptably intelligible the majority of the time. The idea that we couldn’t understand these two black youths without subtitles is insulting. I kept expecting Barbara Billingsley to pop in and cheerily say, “Oh stewardess…I speak jive.”

Feature Commentary with directors Dan Lindsay and T.J. Martin: The duo establishes a jovial tone early on — obviously, they’re friends in addition to being co-directors — as they talk about going for a more cinematic look (especially with their opening credits sequence) and making the decision on how to open the film pretty late in the editing process. Lindsay and Martin also let us know Coach Courtney initially asked to approve footage that they shot (which no documentary filmmaker can do) and defend their decision to use subtitles for certain players (I still completely and respectfully disagree).

Deleted Scenes: (14:06) The six scenes are highlighted by an excised profile of a charismatic player named Joaquin, who bounced around from one foster home to another before moving in with a volunteer coach. Also includes an amusing moment with Coach Courtney showing a player how to play free safety. Features a Play All option.

Making of Undefeated: (8:31) My favorite part was Sean “Diddy” Combs showing up out of nowhere seated next to Coach Courtney before we learned he was an executive producer on the project. Lindsay and Martin reveal that a newspaper article on O.C. Brown is what initially drew them to Manassas High. The two also had different reactions to their win on Oscar night; Lindsay felt great about their chances right before the announcement, while Martin was totally shocked.

Undefeated is a fine documentary that tells an engaging story. In terms of achieving greatness, however, the film gets tackled at the one-yard line. The Blu-ray is appropriately no-frills yet impactful.

Pop this one in if you’re in the mood for a solid sports movie. (Or if you miss Friday Night Lights half as much as I do.)