Posted in: No Huddle by Archive Authors on February 19th, 2013 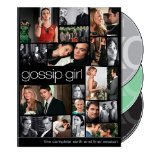 Gossip Girl ran six years on the CW and is based on a series of books written by Cecily Von Ziegesar. It is about the very rich and young of the upper east side of New York City. The gossip girl of the title has remained secret throughout the series but is revealed in the final episode. I won’t be revealing the secret. The series is best described as glossy fun. It is a soap opera in the extreme with a heavy emphasis on fashion and all of the expensive toys of the ridiculously rich. It also deals primarily with teenagers who are “maturing” while trying to deal with the difficulties of a life that has no boundaries.

When the show started, the idea of blogging was still relatively new, before Perez Hilton, TMZ, and a legion of internet dirt mongers became popular. It could be said it was ahead of its time, but we are not talking Nobel-prize-winning innovations. It became a sensation and highly rated on the network, but that is relative to ratings in general. In other words, the ratings weren’t very high when compared with shows on other networks but still were always popular with teens. It won Teen Choice awards a few years running. It also ran in 196 countries.

It also courted controversy and deliberately baited the Parents Television Council with an ad campaign that featured taglines like “OMFG”, “Every Parent’s Nightmare”, “Mind-Blowingly Inappropriate”, “A Nasty Piece of Work”.

One of the many producers and show runners, Stephanie Savage, said that the show was about kids who  watched Sex and the City even though it was not about them. Ironically the CW will be featuring a Sex and the City prequel called The Carrie Diaries to fill the Gossip Girl slot. Stephanie shared the executive producer spot with Josh Schwartz who created The O.C.. It had the same spoiled-kids-in-paradise vibe.

If you are not already a fan of the show, it might be too late to care now, because it’s time has officially passed. Many of the stars are moving on to movie careers, especially Blake Lively (who recently married her Green Lantern co-star Ryan Reynolds) and Leighton Meester. They played the two main girls, Serena van der Woodsen and Blair Waldorf. I won’t try to outline the various cast members and their scandalous activities, because it’s enough to know that it’s just scandalous. I say that with a wink, because I think no one intended this to be taken seriously. It always seemed closer to a spoof of the very rich and their activities than anything close to an expose.

They started to grow out of their prep school confines and jet set around to other locations like the Southampton, LA, Paris and Tuscany, but the heart of the show was always New York City. The producers fought rightly that they needed to seek actual Manhattan hot spots. They felt that no show was currently doing the city justice. Mayor Bloomberg appeared on the show and gave them the proverbial key to the city. I personally think the show is too silly at times, but I suppose it could easily be called a guilty pleasure. Many critics thought the books were better, but the author defended the show. Of course, she would, since it clearly was a big payday.

Contest: Win Interview With a Hitman On Blu-ray From Well Go USA Mafia