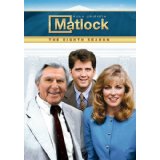 Matlock began life as a television movie from Dean Hargrove, who brought us Columbo. Hargrove would later work the same magic with Dick Van Dyke in Diagnosis Murder. In fact, the two shows could easily have been companion pieces. Both featured sit-com stars from the 1950’s and 60’s who had become somewhat iconic characters. Both would don the role of professionals. Both shows would subscribe to the “formula” mode of storytelling. Diary Of A Perfect Murder would set up the Matlock formula. It’s simple, really. Matlock was a lawyer in Atlanta. Some wronged defendant, usually charged with murder, would show up asking for Matlock’s help. Matlock and his team would investigate the crime with an eye toward, as OJ Simpson is fond of saying, finding the real killer.  His team consisted of his daughter Leanne (Brynn Thayer), herself a competent lawyer, and Tyler Hudson (Holliday), his private investigator (In the early seasons). In the pilot the Matlock character was less Andy Taylor and a little more slick at first. I’m sure that while it was intended to show Matlock’s prowess as a high-priced attorney, somewhere along the line it became obvious that the show’s finest asset was Griffith himself and that southern charm he was already famous for. Whatever the reason, you can see the character soften significantly during the early episodes of the season. And that decision was a smart one, as Matlock would continue for nearly a decade.

The eighth season of Matlock brought more of the same. If you’re a fan, that’s very good news indeed. What is that, you ask? Imagine Sheriff Andy Taylor older and now an attorney, and you pretty much have the setup for Matlock. Forget for a second that both characters were played by Andy Griffith. That’s not all they have in common. Matlock is every bit the “southern gentleman” that Taylor was. He might be a little smarter, but he walks and talks like Andy Taylor. Law graduate Cliff Lewis, played by Daniel Roebuck, also joins the firm as a new lawyer.

So what is old Ben Matlock up to in his 8th year? There are several two-part episodes this season. These two-parters include: The Fatal Seduction: a trip back to his North Carolina roots for a funeral ends up in murder. You know who is right in the thick of it. The Kidnapping is another twofer that they were trying to kidnap Leanne but end up with Billy. Matlock tries to outwit the crooks until the FBI gets involved and things get even more complicated. The last one is The Idol, and it finishes the season. Matlock defends his biggest fan, who is accused of killing a dirtbag PI.

But there are plenty of good single-episode stories. In The Play Matlock is part of a community theater group when one of the actresses is murdered. He defends the play’s director. His fee? He doesn’t want to get cut from the production. The View is a pretty cool Rear Window take-off. Matlock is ill and thinks he saw someone get murdered. But he might have accused the wrong guy. Matlock’s Bad Bad Dream is one of those period-piece farces. He dreams he’s in the 1930’s and on the case of a murdered sax player. Of course, everyone else is there in the change of setting. The Murder Game finds Matlock playing a mystery game with rich folks who donated a ton of money to match wits with him. Of course, someone turns up dead for real.

This is now the next to last season of the series, and I know fans are looking forward to completing their collections. The good news is that CBS has the last season in their plans, and it shouldn’t be long now. Still, with one more season and some Matlock television movie specials to come, “Don’t think this is over.”

Gino Sassani is a member of the Southeastern Film Critic's Association (SEFCA). He is a film and television critic based in Tampa, Florida. He's also the Senior Editor here at Upcomingdiscs. Gino started reviewing films in the early 1990's as a segment of his local television show Focus. He's an award-winning recording artist for Omega Records. Gino is currently working on his 8th album Merchants & Mercenaries. Gino took over Upcomingdiscs Dec 1, 2008. He works out of a home theater he calls The Reel World. Favorite films: The Godfather, The Godfather Part II, The Body Snatcher (Val Lewton film with Karloff and Lugosi, not the pod people film), Unforgiven, Gladiator, The Lion King, Jaws, Son Of Frankenstein, The Good, The Bad And The Ugly, and Monsters, Inc.
The Factory Top Gun (Blu-ray 3D)