Posted in: Disc Reviews by Archive Authors on February 20th, 2013 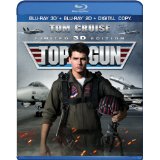 Back around the time I was born, when Tom Cruise had an ounce of sanity, a little movie called Top Gun swept across the globe, raking in over $350,000,000 worldwide, as well as sparking an interest in the US Navy and everything Tomcat, Skyhawk, and MiG related. Ever since its original release Top Gun has kept a hold on its audience, being played almost weekly, and now it makes its way into the world of high definition with its release on Blu-ray 3D.

For the few of you out there who don’t know, Tom Cruise (Mission Impossible) plays Pete Mitchell, better known to the rest of us as Maverick. He’s young, cocky, and he pilots an F-14 Tomcat. His wingman Goose (Anthony Edwards, Zodiac) keeps him in check with a cool head, and is the more cautious of the two. After another pilot turns in his wings, the two are given the opportunity to join the Top Gun fighter pilot school in which only the top 1% of fighter pilots are invited. Upon getting into the school Maverick believes himself to be the best there and borders on the line of being reckless, creating an enemy of fellow pilot Iceman (Val Kilmer, Heat). As the movie plays out Maverick falls in love, contemplates his lifestyle, loses people close to him, and faces death while trying to make it through the training. The movie pretty much wraps up in typical Hollywood style with a bow on it, but still manages to be a good watch.

Back when Top Gun was released there is no doubt that it was a state-of-the-art look into jets and provided some realistic special effects with a decent story. Since then there’s been a million and one movies that have looked nicer, but there’s something about Top Gun that keeps it at the top of the aircraft genre. It could be the great cast, or its originality, but at any rate this film is a good watch if you want to see a movie about fighter pilots. At the same time it’s not a masterpiece that’s going to captivate anyone and everyone, but if you think this type of story is going to appeal to you, you’re going to love its results on Blu-ray

Top Gun is presented in its original aspect ratio of 2.39:1. The 1080p 3D image is arrived at with an MVC dual codec at an average 30/15 mbps. The 3D has mixed results. I was happy that the film’s original grain remained intact. There doesn’t appear to be heavy DNR work here. Unfortunately, that grain caused an odd effect on the converted 3D at times that gave away the artificial nature of the 3D. The real prize here, and what you’re buying the disc for, is the aircraft footage in flight. The conversion does a pretty cool job of giving us spatial perspective in the air. The craft themselves stand out. It’s a shame this film wasn’t being made today. With Tony Scott’s suicide the sequel is likely off. You get just a glimpse of what Scott might have done with native digital 3D.

The DTS-HD Master Audio 5.1 provides a satisfying, if dated, audio presentation. The roaring sound effects sound great, providing terrific bass and rear channel atmosphere. Had I been blindfolded and sat down in front of this movie, there would be no way I could tell that this movie is over 20 years old..

There are two Blu-ray discs here. The 3D version has no other features. The Blu-ray has all of the features of the last release.

The 3D element here was likely undertaken because of the proposed sequel with both Scott and Cruise on board. With that project unlikely at best, we can take some enjoyment from this effort. Of course, this isn’t going to stack up to the new native 3D films being shot today. It’s a worthy effort, however, and a good pick-up for fans of the film.