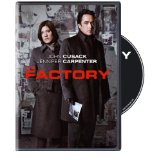 Fictional serial killers have to work extra hard these days if they want to stand out or shock us. Network shows like Criminal Minds bring us a different sicko every week, and a certain popular pay cable hit actually has viewers rooting for the killer. So the best thing I can say about The Factory is that it gives us an exceptionally sick premise. Unfortunately, the straight-to-DVD thriller is ultimately derailed by a sloppy screenplay and a truly preposterous final act.

It’s Thanksgiving night in Buffalo and an unidentified loner (Dallas Roberts) is doing what any sensible loner would do on a chilly holiday evening: trawling the streets for prostitutes. After picking up the manliest one he could find, our guy is disappointed with his purchase and the film wastes no time revealing the identity of its killer. During this opening scene, a TV news report conveniently catches us up on the plot. For the past three years, seven sex workers have gone missing in the winter months and their bodies have never been recovered.

On this very same night, Det. Mike Fletcher (John Cusack) is depressed. Mike has been obsessing over the killer and his victims — much to the chagrin of his concerned partner Kelsey (Jennifer Carpenter) — but their chief has just closed the case. (No bodies, no homicide.) Or maybe Mike is bummed because he has to spend Thanksgiving with his nagging, shrewish wife (the talented Sonya Walger in a totally thankless role), rebellious teenage daughter Abby (Mae Whitman) and sweet, clueless young son Jed (Vincent Messina). The film’s early scenes do a good job of establishing an atmosphere of domestic discord, so it’s no surprise when Abby sneaks out a few nights later. In a phenomenal stroke of bad luck (and contrived screenwriting), Abby is mistaken for a prostitute — which doesn’t say great things about her — and kidnapped by our psychopath. That’s right: the killer accidentally abducts the daughter of the man who has already dedicated three years of his life to catching him! (Buffalo’s population is much smaller than I thought; apparently only about 25 people live there.)

The funniest part is, even with all this ridiculousness, The Factory claims to be “inspired by actual events.” Unfortunately, the DVD doesn’t have any special features, so the filmmakers aren’t around to back this claim up. (Heck, this bare bones release doesn’t even have a Scene Selection menu.) The closest thing I can think of is the Gary Heidnik case, but even that’s a bit of a stretch.

Since the film reveals the identity of the killer within the first five minutes, the suspense obviously has to come from somewhere else. Early on, we learn the killer is keeping something sinister in his basement and we find out what his sick motivations are along with Abby. Director/co-writer Morgan O’Neill drops both subtle and (mostly) not-so-subtle clues about the final-act turn of events, but the Usual Suspects-like montage for the reveal came off as hokey. More importantly, the more you think about the film’s last 15 minutes, the less sense it all makes.

Cusack — who became a star as a sensitive, slacker hero — doesn’t exactly possess the particular set of skills required to play the man on fire Mike becomes when his daughter is taken. The actor seems invested, but he’s not a comfortable fit for this trash. (I kept thinking it was a shame Nicolas Cage was too busy filming whatever terrible movies he has coming up to appear in this.) Carpenter mostly comes off as a watered-down version of her Dexter character (Kelsey doesn’t drop nearly as many F-bombs), leaving fans of the Showtime drama wondering why she’d sign up for a role she could play in her sleep. Meanwhile, Roberts is an effective creep and Whitman — part of the excellent cast of Parenthood — has the smart, misfit teen thing down pat; her Abby is actually a victim worth rooting for.

The Factory was filmed in 2008 and sat on the shelf for nearly five years. This is never a good sign, but the film has a solid cast and a decent enough pace and premise to keep the audience from totally losing interest. Unfortunately, the performers wind up playing down to the shoddy material. (Bonus points for its bleak ending, though.)