Posted in: No Huddle by Jonathan Foster on February 22nd, 2013 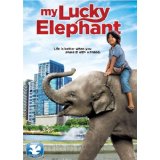 Dumbo. Babar. Horton. Everyone loves elephants. These gentle giants of Africa and India have been lauded in both story and song. They’re also an integral part of any circus worth going to. With all this love for elephants, it would seem any movie about the oversize beasts would be a slam-dunk, right?

My Lucky Elephant is your basic movie about a boy and his dog; or in this case, a boy and his elephant. When a baby elephant gets separated from his herd and stumbles across an orphaned boy (First Khunchar), they instantly bond. The duo then set off on a journey to find work and friends. As they go from the jungle to the city, they also discover their place in the world.

Sadly, My Lucky Elephant falls flat as a movie for a few reasons. The main reason is that the film lacks the emotional gravitas of previous elephant tales like Dumbo or even a non-classic like Horton Hears a Who. Sure, the orphan boy and the elephant he names Lucky are cute, but there’s a lack of connection there. We don’t even learn the orphan boy’s name. In fact, the only ones with names are the elephants. There’s also no real conflict for Lucky and the boy to overcome. They’re never really in danger. As soon as they lose one job, they immediately find another. The ivory hunters chasing Lucky are more inept then the Wet Bandits from Home Alone. The worst thing that happens to these two is a cut on Lucky’s leg.

Another problem with this movie is the sound. I realize this is set in India — although there are a lot of white people in the background of some city shots — but there are several actors, including Khunchar, whose accents and mumbling make it hard to understand what they’re saying. The lack of subtitles further exacerbates this issue. The score is also bad. Most of the music occurs during montages of Lucky and the orphan working. The music during these scenes is this annoying, whistling calliope music that gets stuck in your head worse than the “Macarena” and “Thrift Shop” songs combined. The rest of the music by Patrick M. Schmitz is just as bland as the rest of the movie.

This film does have some redeeming qualities; two big ones, to be exact, in Lucky and his girlfriend Candy (played expertly by Somboon and Hong, respectively). These are the most talented pachyderms I’ve ever seen. I had no idea elephants were capable of doing many of the things they do in this movie. I’d heard of elephants being able to paint, but to actually see them in action was fascinating. I also learned that elephants can play the harmonica and have more rhythm than I do. Next time I’m dancing, I’m going to try out some of Lucky’s moves. (Hey, it’s worth a shot.) If the movie had featured more of the elephants doing cool tricks, it would have been an immensely better film.

My Lucky Elephant is a purely vanilla film. This is something you put on if you want to keep your young kids occupied for 91 minutes. They say elephants never forget, but this film is completely forgettable.