Posted in: Disc Reviews by Gino Sassani on February 20th, 2013 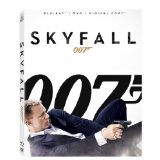 “Were you expecting an exploding pen? We don’t really go in for that sort of thing anymore.”

It was 1962, and Ursula Andress emerged from the tropical island surf sporting a provocative swimsuit, and a tradition was born. The seductive scene would become the first iconic image in a line that has lasted a half a century and counting.  Fifty years; 23 movies makes it the longest-running film franchise in motion picture history. He had many faces over those 50 years: Sean Connery, Roger Moore, Timothy Dalton, Pierce Brosnan, George Lazenby, and even David Niven, Peter Sellers and Woody Allen in a 1967 spoof. For the last three films he’s been played by Daniel Craig. They all had somewhat different styles. They all had a line of beautiful women. They all faced different challenges and foes. But they all shared the same name: Bond…James Bond.

James Bond first appeared in the pages of Ian Fleming’s novel, Casino Royale. Fleming was himself a former British Intelligence Officer and had been engaged in what he liked to call “shenanigans” in that role. He admits that many of Bond’s tastes are lifted from his own preferences. It is safe to say that Ian Fleming was as much James Bond as any of the men who have played him. The books were written one a year during his 2-month vacation as a news writer. He would escape to his vacation home in Jamaica during those 6-8 weeks and in short order produce a Bond adventure. It’s likely not a small coincidence that the first Bond film would feature the island location predominantly as its setting. For most of the 1960’s and into the 1970’s the films were taken directly from his Bond novels. Eventually the film series surpassed the novels and has been operating as original scripts for most of the last 30+ years. In those days the end credits always revealed the name of the next Bond film. Now we merely get a blanket statement that James Bond will return, and return he has in Skyfall.

Skyfall begins with Bond (Craig) in the middle of a mission. He and a female agent (Harris) are chasing an agent who has stolen a computer file that contains the names and aliases of all of NATO’s active spies. A mishaps leaves Bond seriously injured and presumed dead. It’s finally his chance to get away from the espionage game when the world believes he’s dead. An attack on MI6 tugs at his conscience, and Bond reports back for active duty. The attacker is connected with the stolen agent list. The man who has the list releases five of the names and threatens that five more will be released each week. Meanwhile M (Dench) appears to personally be the target. Her computer is hacked, and she’s told to think on her sins.

It doesn’t take long for Bond to track down the villain and discover he’s an ex-MI6 agent Silva (Bardem). The endgame appears too easy, and as usual, it is. The cat-and-mouse game leads Bond back to his childhood estate and a final confrontation with Silva and his gang.

Times have certainly changed. Daniel Craig tried to be the suave character that has described James Bond for most of that 50 years. It hasn’t really worked out that way. Craig is a fine actor, but he never really fit the James Bond mold. Still, the filmmakers have been quite taken with Craig, and he has been signed for at least 2-3 films. That means we’re going to have Daniel Craig in the role for the better part of the next decade. If Craig won’t fit Bond, there’s only one other way to make this franchise continue to work. Bond must change to fit Craig, and that’s exactly what happens in Skyfall. While many of the traditional elements are still intact, the winds of change are surely in the air. The Bond girl element has been pulled back just a little. As the above quote implies, the idea of gadgets has been even more dramatically decreased. Q in the guise of Ben Whishaw reminds me more of Dr. Who than Desmond Llewelyn. His first appearance really made me think of Who, and I later learned others had the same instant reaction. I can see the guy taking over that role someday. The villain is driven by such a mundane motivation as personal revenge, mixed with more than a little insanity. There’s no world domination or doomsday machines to deal with here. The climax doesn’t take place in an elaborate lair, and there’s not near the amount of globetrotting going on here. The movie eventually settles into something very much like Straw Dogs. This is certainly a new Bond, indeed.

The film begins very much like a traditional Bond film. Then it settles down. Director Sam Mendes must understand addiction. He knows he can’t take us off of our old Bond cold turkey. He understands we have to be weaned so as not to suffer from immediate withdrawal. The opening train and chase sequence is one of the most adrenaline-packed in the history of the franchise. It features terrific action and set pieces. It’s the biggest action of the entire film. Mendes moves us slowly into his new Bond and thereby softens the symptoms of withdrawal for us. Before we know it we’ve adjusted to the change and perhaps traded one addiction in for a new one.

While this is disappointing news for Bond purists, it was exactly the right direction to move the franchise. Craig has finally found a character he can wear with absolute ease. This is a Bond who’d rather have a Heineken than a martini. This is a Bond who has a lot of scars both inside and out. He’s not at all self-assured and certainly can’t be described as arrogant and cocky. This Bond carries a lot of ghosts on his shoulder. It’s everything that Craig was trying to do in the first films, but the stories hadn’t quite caught up to him yet. Now both Bond and Craig are in the same place, and whatever your feelings about how true to tradition he is, it does work, and it works well. The film has already performed solidly in its European box office releases. I expect this will likely surpass any of the previous films in its total take.

The cast is quite impressive. Javier Bardem is a marvelous character who is spellbinding. His performance is quite flamboyant, yet it’s also incredibly nuanced. He strikes the perfect balance and brings Silva to life. Heroes are only as good as the bad guys they have to face, and Bardem is a big reason why this dynamic works as well as it does. His body language sucks you in, and he steals the film at almost every turn. He breaks some Bond bad guy ground as well. If you remember some scary rumors that were flying around before Craig was first cast, you’ll enjoy Bardem’s performance all the more. Let’s just say there was once talk about changing one of Bond’s preferences, and it wasn’t the kind of booze he was drinking. Who knows how serious any of that really was, but I think Silva was made to play to that talk somewhat.

Skyfall is presented in its original aspect ratio of 2.39:1. The 1080p image is arrived at with an AVC MPEG-4 codec at an average 25-30 mbps. This has got to be the sharpest-looking James Bond film to date. The high-definition image presentation is nearly flawless. The realism is outstanding. Colors are quite natural. There’s no evidence of a lot of fancy color correction here. Detail is about as good as it gets. Black levels are also outstanding. Shadow definition is very good. There’s a scene where Bond is in M’s home and standing in the shadows. It’s layers of darkness like this with full exact contrast and detail that define flawless shadow definition. They don’t come any better than this.

The DTS-HD Master Audio 5.1 is not as aggressive in the surrounds as you might expect. It’s a case of precision placement without the need to expand the field beyond what is appropriate for the images. That’s immersion at its best. The score comes alive when called for, and the combination of Thomas Newman material with the classic Bond themes is well done indeed. Explosions bring your sub to life and shake things up a bit… not stirred. Dialog is clear most of the time. Craig is often soft-spoken, so there are moments you might have to strain to hear him clearly.

There are two Audio Commentaries here. One features Director Sam Mendes and is the more informative. The second features long-time Bond Producers Barbara Broccoli and Michael G. Wilson. They are joined by Production Designer Dennis Gassner. This commentary is mostly flowery bragging. Broccoli must be in love with Daniel Craig, which explains his casting. It gets to be a bit too much. OK, I made that last part up. It gets to be a lot too much.

Shooting Bond: (59:24) This feature runs in 14 parts with a handy play-all option. It covers such topics as key sequences, stunts, women, Q, M, music, and the future of the Bond franchise. Cast and crew offer sound bites to clips and shooting scenes. The feature pretty much takes the film in a linear fashion and hits the bullet points, pun intended.

If you’re a sports fan, there’s no more dreadful news to hear than that your favorite team is in a rebuilding year. That’s exactly what’s happened to Bond. This film almost feels like a pilot. We’re being introduced to a great number of changes. Some of them you just won’t ever see coming. Bond is hitting the reset button in a number of ways. For a sports team that’s usually means a long season. Not so with Skyfall. This is one rebuilding project I can get behind. The film sports the best production values ever in a Bond film, and that’s saying something, indeed. The only thing keeping this from being a perfect Bond film is that nagging question:  Is this really a James Bond film at all? You’ll have to answer that question to your own satisfaction. Let me just warn you that you’ll be missing out on a very good movie if you allow those expectations to get in the way here. “I’m going to say a word, and I want you to say the first word that comes into your head: Skyfall.”

Gino Sassani is a member of the Southeastern Film Critic's Association (SEFCA). He is a film and television critic based in Tampa, Florida. He's also the Senior Editor here at Upcomingdiscs. Gino started reviewing films in the early 1990's as a segment of his local television show Focus. He's an award-winning recording artist for Omega Records. Gino is currently working on his 8th album Merchants & Mercenaries. Gino took over Upcomingdiscs Dec 1, 2008. He works out of a home theater he calls The Reel World. Favorite films: The Godfather, The Godfather Part II, The Body Snatcher (Val Lewton film with Karloff and Lugosi, not the pod people film), Unforgiven, Gladiator, The Lion King, Jaws, Son Of Frankenstein, The Good, The Bad And The Ugly, and Monsters, Inc.
Top Gun (Blu-ray 3D) My Lucky Elephant