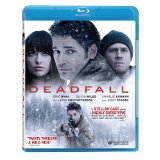 And you thought Thanksgiving dinner with your family was tense. For most of us, it doesn’t get much worse than critical parents, competitive siblings or that weird side dish no one really wants to try. (There always seems to be about a gallon of that stuff too.) Consider yourself lucky: unlike the poor souls in Deadfall, you’ve probably never been chained to the dinner table — not literally, at least — nor had a psychotic Eric Bana point a gun at your face.

On the surface, Deadfall kind of looks like the wintry crime thriller the Coen Bros. never bothered making. Addison (Eric Baan) and Liza (Olivia Wilde) are brother-sister crooks fresh off a big casino heist. One grisly car accident and a dead state trooper later, Addison decides splitting up would give them a better chance of reaching the Canadian border. Liza is picked up by Jay (Charlie Hunnam, Sons of Anarchy) a recently-paroled former boxer on his way home for an awkward Thanksgiving dinner with his retired sheriff dad (Kris Kristofferson) and his loving mom (Sissy Spacek). Everything comes to a head during the aforementioned Thanksgiving dinner.

Director Stefan Ruzowitzki (The Counterfeiters) does a nice job of making a desolate patch of Canadian wilderness look like a modern, mythic American Western for parts of his movie. (I especially enjoyed a chase sequence that replaced horses galloping across a plain with snowmobiles.) Meanwhile, writer Zach Dean has crafted a script strongly reinforcing the (not exactly original) idea that complicated family dynamics exist everywhere. (Kate Mara and Treat Williams get in on the dysfunction as competent young deputy Hanna and her overly harsh father. Hanna has the misfortune of repeatedly stumbling onto the bad guy.) Unfortunately, too much of what precedes the film’s thrilling climax is hooey.

The opening act of Deadfall is intriguing. We’re immediately dropped into the aftermath of the heist, and the film quickly establishes that protective Addison and child-like Liza have an, um, odd relationship. Once the two split up, however, the film’s tone gets knocked out of whack. Wilde and Hunnam appear to be starring in a moody family/relationship drama. (I wish we hadn’t been shown Jay’s own recent brush with the law; we know Liza is on the run, so maybe we wouldn’t have noticed that Jay was also going out of his way to dodge the cops.) Meanwhile, Bana seems to be making his way through a violent, pseudo-mystical odyssey. At one point, Addison comes across a Native American who claimed a past wife warned him of Addison’s arrival through a dream. (Huh?!) He later assists a family in a predicament similar to one from his and Liza’s childhood.

From his first appearance on-screen, we know Bana’s Addison is a different kind of creep. His fatherly affection for his sister comes off as both genuine and delusional at the same time. Addison also doesn’t appear to necessarily enjoy killing people unless he has to or unless they’re abusive jerks. Bana really shines, though, when Addison holds court during the Thanksgiving dinner, giving a performance that is deranged without totally going into cartoon territory.

Wilde probably has the trickiest role in the cast as Liza morphs from little girl to femme fatale mode depending on what man she’s with. We never get a firm read on Liza, and I’m not entirely sure the actress totally got her either. Hunnam makes for a handsome, bruised leading man. Unfortunately, Jay and Liza’s connection felt completely rushed and not at all believable beyond these two being drawn to each other because they’re both impossibly attractive. Kristofferson (using his weary squint to maximum effect) and Spacek (completely calm and stoic even when her character has a gun pointed at her) elevate seemingly simple roles with both their skill and cinematic life experience.

Deadfall is as much about bad dads and traumatized kids as it is about crooks trying to get away with a crime. I wish the filmmakers had set aside some of the dour nonsense — a subplot about deputy Hanna’s missing mom goes absolutely nowhere — and had even more fun with the “Thanksgiving family gathering from hell” premise.

Deadfall is presented in an aspect ratio of 2.35:1. The 1080p image is arrived at with an AVC MPEG-4 codec at an average of 37 mbps. As I alluded to in the main portion of the review, the stars of this show are Bana and the snowy landscape. This transfer illustrates a clear contrast between the constant barrage of snow and the characters/vehicles/trees. Exterior wide shots generally have impressive sharpness, while a few darkened interiors give us some noticeable grain. Close-ups look especially good, as we can see fine detail in the jacket Addison picks up along the way as well as every manly wrinkle on Kristofferson’s face. It’s the medium shots that occasionally appear a bit soft. The color palette is unsurprisingly muted and wintry, except for the Thanksgiving scene which has a yellow hue due to the indoor lighting. Though this had the potential to be spectacular, this video transfer is a solid presenatation nonetheless.

The DTS-HD Master Audio 5.1 track grabs your attention in the first few minutes when the subs lower the boom for the stylish car crash that sets the film’s plot in motion. (If you’re not careful, the subs might make you jump out of your seat a few times during unexpected bursts of violence.) The rears do a nice job of cranking out Marco Beltrami’s anxious score and subtle atmospheric noises. However, a surprising amount of gunfire and whooshing wind is left in the front speakers. On one hand, I admire the restraint; on the other, I thought it was a missed opportunity to place us in the middle of a snowstorm. (Sonically speaking, at least.) Dialogue comes through clearly in this well-balanced track. Like with the visual presentation, I found myself thinking this track could’ve been even more dynamic.

Behind the Scenes Featurettes: (5:30) Snow & Western (2:42) features Eric Bana, Olivia Wilde and other cast members talking about the challenges of performing while freezing their butts off. They all agree, however, that the desolate locations were an asset for the modern Western vibe director Stefan Ruzowitzki was trying to achieve. In Family (2:48), the cast and crew talk about the complicated familial dynamics explored in the film. Features a Play All option.

Production Interviews: (9:44) Bana (2:47) talks about preferring the freedom of working from an original screenplay when he’s trying to create a character. Wilde (1:37) reveals that she has compassion for hard-luck Liza. Finally, director Stefan Ruzowitzki (5:18) heaps praise on Bana’s portrayal of the complicated villain, and shows reverence for living legends Spacek and Kristofferson. Features a Play All option.

Extended Interview with director Stefan Ruzowitzki: (10:34) Ruzowitzki states that he wanted to make a mainstream movie that wasn’t brainless. The director talks about having to accomplish this in 34 shooting days with not a lot of money, which he refuses to use as an excuse because the audience generally doesn’t care how much money you have. He also has more kudos for his charismatic cast. In terms of the story points, characters and working in the cold climate, this interview covers a lot of the same ground as the previous two special features.

Behind the Scenes Footage: (8:09) This is exactly what it sounds like: we watch Bana, Wilde and the crew work on a scene from the early part of the film. Watching all the crew members in heavy winter gear makes you feel sorrier for Wilde (in her mini-dress) than you did watching the movie. Also includes a scene with Hunnam and Wilde in a bar.

AXS TV – A Look at Deadfall: (4:46) Plays out like the film’s trailer interspersed with interview snippets from the cast and director. This also feels totally redundant.

The Deadfall Blu-ray is a lot like the film itself: a solid effort that could’ve been much better. Although I enjoyed Bana’s performance and we get to see more of Wilde than usual, this wintry thriller may not be totally brainless, but it mostly left me cold.