Posted in: The Reel World by Brent Lorentson on February 23rd, 2013 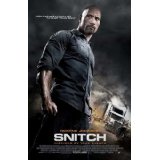 When I see the claim “inspired by true events” I tend to always take this with a grain of salt, because really just about anything can be inspired by a true event.  It’s a misleading caption that frustrates me when I see it used to promote a film.  Why does it bother me so much?  Its simple; people read those words and begin to think everything is just about entirely true.  In this case the film Snitch was inspired by true events.  It took some time but I did manage to find a video on You Tube about a PBS television show that inspired the film.  This again is an example of what Hollywood does to spin the truth in order to fill seats at the theater.  But this review isn’t about fact checking but about what we see on the big screen.

After reluctantly agreeing to receive a package for a friend filled with MDMA, Jason Collins (Rafi Gavron) finds himself set up in a DEA sting and is about to take the fall with several drug charges for simply receiving a package.  The filmmakers wastes no time pulling us into the situation; unfortunately, they felt the need to shoot everything handheld, and what is delivered instead of a suspenseful take down, is a minor case of motion sickness.  I’m all for handheld footage, but in this case it’s just several minutes of footage that never seems to be framed and borders on what at one time would have been considered unusable footage.  As for what happens to Jason, well, unfortunately his best friend set him up, and because of a new law the only way to shorten your sentence is to offer up another fish in the drug pool.  Too bad for Jason, his only drug connection is his friend who tossed him under the bus.

Dwayne Johnson plays the concerned father, John, who is willing to do anything to help keep his son out of prison.  His plan, since his son knows no other dealers, is to infiltrate a drug cartel and take them down for the State Attorney, Joanne Keeghan (Susan Sarandon).  John basically uses Google to find what he needs to know about the drug trade and figures he’s a big enough guy so he’ll hit the streets and find himself a drug dealer.  This blows up in his face when he ends up having a gun pulled on him, and a group of hoodlums work him over with a fair share of kicks and punches.  It’s a well-intended approach, but how dumb can the guy be to believe this plan would work?

It’s after his drug-dealing stint gone bad that John realizes he has several ex-cons on his payroll at the warehouse.  After a little bit of digging, he finds the perfect match with Daniel (Jon Bernthal best known as Shane from The Walking Dead).  Daniel, though, isn’t ready to cooperate considering he has a family to look after that he nearly lost when he previously went to prison.  This moment is where I really began to dislike the John character, because he’s using a man who genuinely wants out of the life of crime but needs the money to find a better life for his son.  Sure, this is a movie about a man willing to do anything for his son, and that’s great, but let’s face it, the son was no angel, and Daniel served his time.  For me once John went down this path of using people I had hoped this would all turn around and lead him behind bars but…well, I’m getting ahead of myself.

Daniel ends up agreeing to setting up an introduction with a dealer he knows and for those that are fans of The Wire will recognize the actor playing Malik (Michael Kenneth Williams, he played Omar).  Malik injects some personality into this film, not a moment too soon.  Seeing Malik toy with John is one of my favorite scenes, and even though he’s supposed to be one of “the bad guys” he has some much charisma it’s hard to not like this guy.  The whole point behind the meeting is that John wants to convince Malik to use his semis to traffic his product (John planning to basically hand it over to DEA and wipe his hands clean), but of course things can’t be that easy.

As for the DEA, their front man is an almost unrecognizable Berry Pepper as Agent Cooper.  Pepper is one of those actors who continues to impress me, not only with his choice of roles but the level he manages to commit himself to the role.  Cooper isn’t new to the drug scene, and he’s seen many people try to go against the cartels and watched them fail.  He wants John to succeed, but he knows that odds are John will most likely not only get himself killed but his family as well.  Though I wouldn’t go so far as to say this is an award-winning performance by Pepper, I believe this performance should at the very least put him on the radar as a guy who deserves bigger and better roles.

So why I haven’t I talked about the action; after all this stars Dwayne ‘The Rock’ Johnson, and the trailer seems to tease us with an action packed film.  Well, I’m sorry, with the exception of two small action set pieces, this film is all drama and a lot of talking heads trying to decide how best to do something illegal to help get John’s son released.  This film could have used a few more action scenes or had 20-30 minutes cut out, because this movie is slow.  Even during the big climax where John is in the semi being chased by members of the cartel, it was enough to inspire yawns and debate between Arby’s and Burger King in my head.  I blame the marketing department for this, because the trailers do nothing but promise the standard action packed movie with ‘The Rock’, but this is a far cry from that.

The film is a solid drama where Johnson attempts to flex those acting chops of his and does a decent job at that.  Because people will be expecting a big action film I have a feeling there will be a lot of disappointed fans, but it’s not the movie’s fault, when you expect an action film you want an action film.  For those willing to forgive the lack of action, you’ll find you end up with an above-average film with some nice performances but nothing that really makes an impact.  Unfortunately the movie plays like an important film with some kind of message for us viewers to stand behind; in that regard the movie failed completely.  I’d recommend holding out for DVD on this release, and if you’re looking for the next action release with ‘The Rock’ the GI Joe sequel will be out shortly.

Brent Lorentson is a horror writer and film critic based out of Tampa, Florida. With a BA in Digital Film, he co-wrote and co-directed Scavenger Hunt. His short stories have appeared in various horror anthologies. In 2019 his short script Fertile Blood will be a part of the anthology horror film Slumber Party. He is currently working on his first novel A Dark and Secret Place set to be released in late 2019. Favorite Films: Taxi Driver, Fight Club, I Saw the Devil, The Wild Bunch, Dawn of the Dead, A Clockwork Orange, Pulp Fiction, Heathers, The Monster Squad, and High Fidelity.
Argo (Blu-ray) The Master (Blu-ray)