Posted in: Disc Reviews by Brent Lorentson on February 23rd, 2013 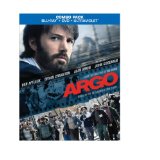 Ever since Ben Affleck stepped behind the camera and took on the role of director, I’ve found myself not only becoming a fan of his work but believing the man has greatness ahead of him.  When I first watched Gone Baby Gone, I was more than a little impressed; after all, it was his first time at the helm.  But then Affleck released his follow-up film, The Town, and it blew me away.  Sure, there were some great movies that came out that year, but the fact that it didn’t make the list of best picture nominees I just can’t understand.  But with the release of Argo it would seem the Academy will have a chance to right that wrong and shower this film with plenty of adoration.  Sure, this is pretty much a shoe-in for the best picture nomination, but not just because it’s great, but really, what is the competition?

There is a lot that I enjoyed, and dare I say loved, about the film.  As the old Warner Bros. logo appeared on the screen I got a little excited.  No time is wasted, thrusting us right into the middle of a protest growing out of hand, outside the US Embassy in Iran.  The opening works great as the tension builds between the protestors and the Americans doing all they can to destroy all the confidential files they have on hand. With time running out before the embassy is over run, six Americans manage to escape taking refuge with the Canadian ambassador (Victor Garber).

With growing concern that the six Americans will be found, the CIA has to put together a plan to get them out safely.  This is when Tony Mendez (Ben Affleck) is brought in.  All the plans the CIA has to offer seem to be destined for failure, that is until Tony suggests the absurd notion they go in to rescue them under the cover of a Canadian film crew.  It’s hard to believe this plan actually was conceived, but as we see everything carefully come together, we see how it is a thing of genius.

To help add credibility to the plan, Mendez travels to Hollywood to make their fake movie real enough to convince the Iranians everything is legitimate.  This is where Mendez meets with special-effects man John Chambers (John Goodman) as well as Hollywood producer Lester Siegel (Alan Arkin).  Lester and John guide Mendez along in a crash course in filmmaking, getting promotional items made and doing everything they can to grab the interest of the press so the word can spread that Hollywood has its sights on possibly filming their sci-fi adventure in Iran.

Many of the film’s lighter moments play out through the Hollywood portions of the film.  Arkin and Goodman are at their best here.  The two share a great chemistry together, and both seem to be having a good time in this film.  Seeing how John Chambers, the makeup effects wizard behind such films as The Planet of the Apes, Star Trek, and Phantom of the Paradise, helped out the CIA was just an added cool layer to this film.

Once Mendez has made his way to Iran and has to put the plan in action, when not just the lives of the six Americans rest upon his shoulders but his own as well, the film kicks into nail-biting mode.  Knowing at any time one wrong move, if a soldier tries just hard enough the whole plan is done for.  It’s this tension that is built that leaves the biggest impression.

And then there is Bryan Cranston; the man is simply a powerhouse performer in nearly everything he is in.  Throughout most of the film he plays the part of a CIA agent admirably, but it’s in the third act where he delivers one of the best performances I’ve seen the man give.  It’s a key portion of the film, so I’ll refrain from any details, but it was this performance I walked away recalling the most.

About that third act.  Take a bow, Mr. Affleck. Everything about this portion of the film is simply great.  As the credits rolled it took some time to digest this film.  Is it an instant classic to rank alongside All the Presidents Men or Network?  I believe it is too soon to answer that.  But, what is clear is the importance of this film, sure, there are political points involving Libya I can delve into, but I won’t.  What I actually took away from this was the impact men like Tony Mendez make on our country and the world, but they are rarely given the thanks they deserve.  I’m not meaning for this to be a soapbox moment, but this film showed me what a real hero is.  Argo is simply a chapter in the life of a man who risked his life for years for the good of the country and the reward was simply knowing he kept America safe.

Argo is presented in its original aspect ratio of 2.40:1. The 1080p image is arrived at with an AVC MPEG-4 codec at an average 25 mbps. Affleck went to a lot of care and trouble to make us feel like we were watching a film contemporary to this event. The film even opens with the 1970’s Warner logo instead of the current one. The image contains the grain elements that also make this look very much like a 70’s film. It reminded me of Dirty Harry in the way the colors and film texture appears. This is all intentional and couldn’t be better represented by this high definition image presentation. That means this isn’t a “showy” image. Black levels are only average but seldom dominate the film. It’s the textures and feel of the image that are more important than sharpness here. Mission Accomplished.

The DTS-HD Master Audio 5.1 is really there to serve the dialog. Most of the time that’s exactly what it does. Certainly, there are moments when the embassy is stormed when surrounds are a bit more aggressive and you even get a bit more sub response. Overall, this is a character picture and the audio focus is appropriately on that.

Eyewitness Accounts: This is a picture in picture option that allows you to hear from the real participants at key scenes.

Rescued From Tehran – We Were There: (16:51) If you don’t opt for the picture in picture experience there are other opportunities to get the accounts. This feature brings us those real-life participants who tell their compelling stories. Jimmy Carter offers some retrospective on the event here as well.

Behind The Scenes – Argo Absolute Authenticity: (11:19) Of course, the film is not absolutely authentic in the story. There’s even quite an unusually prominent message in the film that reminds us that there was fictional elements used. What this feature refers to is the great pains they went through to offer authenticity in the production design. The actors who played the house guests had to live a week in the set house with only 1970’s technology. That means no computers or cell phones and no magazines or newspapers older than 1979.

Escape From Iran – The Hollywood Option: (42:35) This is a full-length documentary of the events surrounding the rescue operation.

The performances in this film are amazing.  The attention to detail, along with the masterful direction, helped take us back to a moment in history that many in the world have forgotten or simply were never aware of.  So is this the best picture of the year?  There are still plenty of films to be released before I can say, but this certainly deserves to be seen and appreciated.

Brent Lorentson is a horror writer and film critic based out of Tampa, Florida. With a BA in Digital Film, he co-wrote and co-directed Scavenger Hunt. His short stories have appeared in various horror anthologies. In 2019 his short script Fertile Blood will be a part of the anthology horror film Slumber Party. He is currently working on his first novel A Dark and Secret Place set to be released in late 2019. Favorite Films: Taxi Driver, Fight Club, I Saw the Devil, The Wild Bunch, Dawn of the Dead, A Clockwork Orange, Pulp Fiction, Heathers, The Monster Squad, and High Fidelity.
Deadfall (Blu-ray) Snitch