Posted in: No Huddle by Brent Lorentson on February 25th, 2013 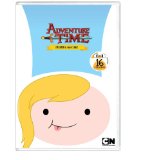 The story about Finn, the human, and Jake, the Dog is something I’ve managed to come into without any knowledge of what is going on.  It’s not as though there is a complex plot built around the characters but I’m somewhat at a loss why the 12-13yrold boy lives with his talking dog with no parental unit to be seen.  I know it’s a cartoon and considering this takes place in the land of Ooo, hoping to find a plot thread that follows any real world logic is asking a bit much.

In this DVD release from Cartoon Network, there is a collection of 16 episodes that follow Finn and Jake as they partake in adventures in the land of Ooo.  With only a few recurring characters, one I enjoyed seeing the most is the Ice King.  Though he may be viewed as a villain, all he claims to really want is to be friends with Finn and Jake.  In a way I find this character the more creative decision the animated series  presents because despite the Ice Kings actions, it does play out as though Finn and Jake are the oblivious villains.  An example of the Kings actions is he uses a freezing potion to spend time with Finn and Jake and tries to force them to bond and become his friend.

But the Ice King is not the only danger in the land of Ooo.  Every episode brings a new adventure whether we have our two heroes trying to discover the identity of a ghostly princess, or being sent on a mission to deliver special tarts to prevent the death of Princess Bubblegum.  (Yes there is a character named Bubblegum).  But it’s not just that she is a princess, she just so happens to be the girl Finn has a massive crush on and will do just about anything for her, This also is another reason why Finn and the Ice King don’t get along because the Ice King also shares the same affection for the Princess…I find this slightly disturbing since the Ice King is an older man and Bubblegum is a teenager.

The fairytale setting allows for plenty of surreal imagery, but in the episode Death in Bloom the animator’s ramp it up all the more when Finn and Jake venture to the ‘Land of the Dead’.  The circumstance of their hell like journey involves them needing to bring a plant back to life that died in their care for the princess.  It’s episodes like this where I would recommend keeping this away from kids under the age of 8 simply because all the talk about death and skeletons wanting to take our heroes flesh may be little to intense for the younger viewers.

Even though I appreciate the animation and find the show had some creative stories I found it difficult to really get into this series.  I can’t say there was anything that stood out and bothered me, but really with the exception of a couple episodes I found the series a bit unremarkable.

The clever thing I should call attention to concerns the title of Fionna and Cake.  What the creators did was simply play the what if scenario where instead of our heroes being a boy and his dog it is about a girl and her cat.  This simple approach is a great concept that had me wishing so many other shows gave this a try.  It’s this innovation in storytelling that has me feeling perhaps this is only a weaker season and maybe I should give the previous seasons a try before writing the show off altogether.

Brent Lorentson is a horror writer and film critic based out of Tampa, Florida. With a BA in Digital Film, he co-wrote and co-directed Scavenger Hunt. His short stories have appeared in various horror anthologies. In 2019 his short script Fertile Blood will be a part of the anthology horror film Slumber Party. He is currently working on his first novel A Dark and Secret Place set to be released in late 2019. Favorite Films: Taxi Driver, Fight Club, I Saw the Devil, The Wild Bunch, Dawn of the Dead, A Clockwork Orange, Pulp Fiction, Heathers, The Monster Squad, and High Fidelity.
The Master (Blu-ray) Seeds of Destruction (Blu-ray)