Posted in: Disc Reviews by Jeremy Butler on February 25th, 2013 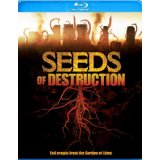 “God never would have intended this.”

Has anyone ever noticed the pairings that tend to occur in disaster films? A lone scientist with an expertise in a particular field of study partners with a lone government agent or soldier to prevent a cataclysmic event that will result in the destruction of mankind, whether the disaster is manmade or an act of fate. This was in the case in Godzilla (American version), Independence Day (there may be some controversy on whether this qualifies but you must admit that the main focus was on Smith and Goldblum), miniseries Asteroid, and now it would seem Seeds of Destruction.

The film follows Dr. Jocelyn Snow (Von Pfetten, Decoys) an expert in the study of plant life. Three years earlier, Snow was part of expedition in Turkey searching for the legendary Garden of Eden, the original paradise created by God for Adam and Eve, the very same paradise they were later exiled from. During the dig, she unearthed a vase she believed to contain evidence of what she was looking for however her colleague Dr. Frame (James Morrison, 24) tells her that the vase contained nothing and that funding for the dig had been pulled.

Three years later it is discovered that Frame’s claim was a lie as another colleague that took part in the expedition attempts to make some quick cash selling one of the pieces recovered during the dig: one of seeds that were inside of the vase. From one seed an entire oasis can be created if the environment is pure and is controlled. The deal goes bad and the seed is released in a hazardous environment, the pollution from the area causes a mutation and instead of a beautiful oasis, weeds grow uncontrollably and spread throughout Nevada on its way towards the coast. If it reaches the coast it will trigger tsunamis that essentially could mean the end of all life. Dr. Snow is brought in by SCOPE, a fictional organization that monitors natural disasters and teamed with agent Jack Taylor (Adrian Pasdar, Heroes), a man who after a recently tragedy has become faithless. Together they must work together to come up with a solution that put a stop to roots before they can reach the coast.

Seeds of Destruction is an interesting attempt to blend eco awareness with biblical undertones, I’m not sure if it really works though. I suppose the way the story pieces it all together fits but the biblical parts seem out of place. The theme of faith or belief is secondary perhaps even third behind the theme of science and importance of environmental care. The only time faith seems to move to the front line is when Jack is telling the story of the tragedy of what happen to his family that resulting in him losing his faith and Pasdar passive portrayal does nothing to emphasize the themes importance; it almost as if the scene as a last minute entry.

The strongest performance came from Baroness Von Pfetten; she displayed the curiosity and intrigue in the phenomenon the seeds that you would expect to find in a scientist. Pasdar gives a stoic performance but lacks emotion; he is easily believable as the hard boiled government agent willing to go against authority but not a man devastated by the loss of his family.

The story is interesting but the closing was a poor attempt to bring a resolution of good out of the bad caused by the seed. There were two better ending points that happen just before the actual ending in my opinion: One point happened down in the mineshaft and the other and perhaps my favorite of the two happen maybe two minutes before the actual ending in the lab between Von Pfetten and Pasdar. Either two would have served as a better conclusion in my opinion.

Seeds of Destruction is presented in an aspect ratio of 1.78:1. The 1080p image is achieved with an AVC MPEG-4 codec at an average of 25 mbps. The movie was filmed with Super 35 mm film. Overall the video presentation is good given the apparent made-for-TV movie budget. Mild grain is visible in the background during wide and medium camera shots primarily during interior locations. During the close-ups the picture quality is extremely clear with plenty of detail such as the visibility of the pores and facial lines on Adrian Pasdar and Stefanie Von Pfetten’s faces. Black levels, which don’t become prominent until the film’s climax, are emphasized well. Though the warm colors of the film aren’t vibrant and don’t exactly pop off the screen, they still manage to give the whole presentation a good look.

The CGI work of the film did not impress me; the graphics of roots appeared generic and very animated. Overhead views of the roots lent a more authentic look however there is no danger of finding the close-ups shots of the roots springing out of the concrete too realistic.

The Dolby TrueHD 5.1 mix serves the film very well here. The dialogue is clear and discernible without the trouble of being out blown by explosion or the score. The entire audio track blends together well and remains even through the film’s entirety.

No special features were included on this disc.

I don’t know about you but I’m seriously considering stocking up on weed killer.

Jeremy Butler is a film school graduate of the International Academy of Design and Technology. He is been writing for Upcomingdiscs since 2012; however, movies have played a big part of his life for much longer. Favorite genres include horror, science fiction/fantasy, and comedy. Favorite movies are V for Vendetta, Boondocks Saints, Kiss Kiss Bang Bang, and The Godfather.
Adventure Time: Fionna & Cake 4 The Client List: The Complete First Season