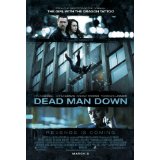 Revenge has rarely looked as tedious or absurd as it does in Dead Man Down. (Unless you count the current, underwhelming second season of, well, Revenge.) Despite the fact that it boasts a title straight out of Steven Seagal’s IMDb page, Dead Man Down features a talented cast and is the American theatrical debut of Danish director Niels Arden Oplev, best known for making the Swedish adaptation of The Girl with the Dragon Tattoo. It’s a shame everyone came out to play for a project that doesn’t even achieve “Enjoyably Preposterous Thriller” status.

Colin Farrell stars as Victor, a low-level thug working for ruthless mobster Alphonse Hoyt (Terrence Howard). Someone has been sending Alphonse cryptic notes and vaguely threatening letters. We learn relatively early on the perpetrator is actually “Victor”, who assumed a new identity after Alphonse and some Albanian goons destroyed his family and left him for dead. Now Victor has concocted an elaborate (yet surprisingly careless) plan and is willing to pay the ultimate price to make sure Alphonse and the others pay for their sins.

Complications arise in the form of Beatrice (Noomi Rapace), a partially-disfigured beautician who lives in the building across the way from Victor. The two eventually connect, and Victor learns he and Beatrice have other things in common besides their shared affinity for peeping in each other’s windows. As they learn about their respective dark pasts, Victor and Beatrice are torn between their growing affection for one another and wanting to help the other person achieve their violent goals.

On paper, you have the outline for a solid if unspectacular story of retribution and the damaging effects of all-consuming rage. The Bible may tell us to turn the other cheek, but the movies usually suggest we blow up the other guy’s life. Where this film falters is in not making the pieces of that solid outline fit together in a believable or engaging way. The lion’s share of the blame goes to an alarmingly sloppy script by writer J.H. Wyman, who must’ve used up all of his brain power on Fringe.

Without venturing too much into spoiler territory, I’ll just say the movie never addresses nagging questions like how the presumed dead Victor was able to infiltrate Alphonse’s gang so easily and without altering his own appearance. (Trimming his beard doesn’t really count.) The movie informs us Victor was an engineer and a soldier in his past life, which is supposed to make his familiarity with electrical gadgets and transformation into John Rambo for the film’s final act more believable. (If Victor’s so smart, why is he having delivery confirmations of threatening packages texted to his personal cell phone? Also, if you’re going to murder someone in your own place, draw the blinds. Even I know that!)

Some of this ridiculousness could’ve been salvaged if Oplev didn’t oversee the proceedings with such gloomy self-seriousness. A bona fide Enjoyably Preposterous Thriller like Law Abiding Citizen may not be a great movie, but it had infinitely more fun with a similar concept. I also don’t foresee Oplev making his money as a big-time action director if his set pieces in this film are any indication. The climactic shootout is both clumsy and a bit hurried. The director shines, however, when he’s giving us Departed-style tension whenever Victor’s place within Alphonse’s organization is threatened. (Lucky for Victor, Alphonse and his crew are much too dopey to put the pieces together.)

Farrell plays Victor as a hollow shell of a man consumed with the idea of vengeance. It’s a fine acting choice, but it’s also an absolute waste of Farrell’s considerable charisma. Whether the movie’s really good (In Bruges) or he’s one of the few good things in bad-to-mediocre flicks (Daredevil, Horrible Bosses), the actor is at his best when he’s allowed to display some of the impish charm he often shows in real life. Rapace has interesting chemistry with Farrell — especially when Victor and Beatrice’s first dinner date takes an unexpected turn — but I found it a little too convenient that Victor crossed paths with someone on her own revenge quest. (And I found it totally unbelievable that he would trust her with crucial parts of his plan.)

Meanwhile, Howard’s stylish, icy persona suited his gangster character quite well — and reminded me why he was somewhat of an awkward fit for the frothy Iron Man movies — even if the actor is ultimately underused. My favorite person in the cast may have been Dominic Cooper as an overeager fellow member of Alphonse’s gang who Victor would prefer not to kill even as he gets closer to discovering Victor’s secret. I also enjoyed the sweetness Isabelle Huppert brought to Beatrice’s mom, which was so out of place in this grim movie I kept expecting some sort of twist. (She’s not really hard of hearing!) Meanwhile, talented veterans like F. Murray Abraham and Armand Assante pop in for a scene or two without making much of an impression.

In the end, Dead Man Down is neither substantial nor competent enough to say anything meaningful about the folly of revenge. Even worse, it’s not even trashy enough to enjoy as a lark. With a title like Dead Man Down, the best I was hoping for was a “Good Bad Movie”; unfortunately, this one’s just “Bad Bad Movie.”

Emperor Oz The Great and Powerful