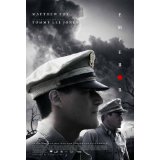 The most interesting thing about Emperor — the stately, bloodless post-World War II drama from director Peter Webber — is that it begins where most war movies end. The messy, complicated business of picking up the pieces of a shattered country after a hellacious conflict tends to happen off-screen. Granted, war crime tribunals are inherently less cinematic than epic military battles, but Emperor still managed to leave a lot of dramatic possibilities on the table.

The film — based on the book “His Majesty’s Salvation” by Shiro Okamoto — opens with archival footage of the Aug. 6, 1945 atomic bombing of Hiroshima. After the subsequent surrender of Japanese forces, we meet the conflicted Gen. Bonner Fellers (Matthew Fox). Through soppy voice-over narration (which makes the character sound like a stiff sad-sack) we learn that Gen. Fellers loves Japan, but hates what the country has become.

Because of his familiarity with Japan, Gen. Fellers is ordered by Gen. Douglas MacArthur (Tommy Lee Jones), Supreme Commander of the Allied Forces, to round up a group of alleged war criminals. Eventually, Gen. Fellers is charged with investigating Emperor Hirohito’s role in kick-starting America’s involvement in WWII — specifically any knowledge of the attack on Pearl Harbor— and deciding if the emperor will be hanged as a war criminal.

There’s a lot of fascinating stuff at play here. The American desire to be seen as liberators rather than conquerors would’ve been a tense, delicate balancing act to explore. (Heck, it could’ve been the whole movie.) Instead, Gen. Fellers is given a ridiculously tight 10-day deadline to complete his Hirohito investigation. Meanwhile, Webber and screenwriters Vera Blassi and David Klass present the film as a weird mash-up of a romantic historical drama and an episode of “Law & Order: Tokyo.” (Chung, Chung)

You see, even though Gen. Fellers only has 10 days to determine if a man considered a deity in Japan will hang and potentially push the country’s volatile populace over the edge, he still carves out plenty of time to search for Aya (Eriko Hatsune), the beautiful Japanese exchange student he fell in love with in the early 1930s. (Wait, what?!) Although Fellers managed to spend time with Aya in Japan during the days leading up to WWII, the film inadvertently makes it seem as if Gen. Fellers is not so much in love with the country as he is with the one girl.

The fact that Webber (Hannibal Rising, Girl with a Pearl Earring) directs this film with as little personality as Gen. Fellers possesses certainly doesn’t help matters. The filmmaker has a compelling, under-dramatized story and a captivating setting on his side, yet mostly squanders them with a rote, incomplete presentation. I realize the story is told from Gen. Fellers’ perspective, but the screen time used on the romance would’ve been put to better use fleshing out some of the Japanese officials the general interrogates.

As for Fox, I’m actually a fan (and a big-time Jack Shephard apologist), but the actor brings almost nothing as a performer to this film. I realize Gen. Fellers is portrayed as a restrained individual — which works well enough for the investigative scenes, but is somewhat disastrous for the romantic bits — but Fox gives so little and is so dull that it’s hard to see what makes the general so effective at his job. (The wan screenplay doesn’t do him any favors.) Meanwhile, the only Japanese performers who get to show more than one-dimension are the exceptional Masayoshi Haneda as Gen. Fellers’ driver/translator and Toshiyuki Nishida as Aya’s uncle, who teaches Gen. Fellers about the mindset of the Japanese soldier.

Thank goodness for Tommy Lee Jones! I didn’t even mind how over-the-top his performance was because the actor breathed some much-needed life into the dreary proceedings whenever he appeared on screen. His MacArthur is brash, ambitious (much is made of his desire to be president one day) and willfully results-oriented. Though the performance probably works better in small doses, I’m not really sure why the film decided to focus on a wet mop like Gen. Fellers/Fox when it had a dynamic presence like MacArthur/Jones in its back pocket. At the very least, the filmmakers could’ve delved further into the process of Japan exchanging its “Emperor” for a “Supreme Commander.”

Historical accuracy/inaccuracy aside, Emperor spends way too much time and energy focusing on the wrong characters. This isn’t a documentary; so as far as I’m concerned, the movie’s primary responsibility is to be entertaining and compelling. And on that front, it mostly bombed.