Oz The Great and Powerful

Posted in: The Reel World by Gino Sassani on March 8th, 2013 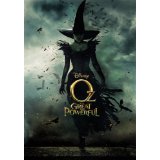 “You’re capable of more than you know.”

Perhaps it’s been a long time coming. The MGM version of The Wizard Of Oz has been captivating audiences for over 80 years, introduced to new generations of admirers, first through frequent re-releases in movie houses. Then it was annual showings on television, where I first encountered the classic film. Finally, the many phases of home video have made it a popular choice and a staple of any truly complete film library. The film is memorable for so many reasons. The technological achievements for 1939 were nothing short of magical. The cast took to their parts and gave soul to the lovable, and not so lovable, characters. Judy Garland’s short and tragic life will forever be identified for most of us as Dorothy. Now, in 2013 it takes a lot more to wow an audience, and who better to make the attempt than the collaboration of Walt Disney Studios and Sam Raimi?  Together, with the legal hawks from Warner Brothers watching every move, they have set out to take us on a magical journey to Oz, and a breathtaking journey it is. It might become a classic in its own right….if it only had a heart.

Oz The Great And Powerful is the inevitable origin story of the once-wonderful Wizard Of Oz. Oscar Diggs (Franco), his friends call him Oz, is a showman. His magic isn’t quite as flawless as he might like, and he barely holds together a circus show. He also has another problem. He’s quite the womanizer with a flair for playing on the gentler sex’s emotions. Of course, it’s bound to get him in trouble. To flee the wrath of an outraged strongman, he climbs aboard the hot air balloon owned by the circus and makes his escape. His relief is only temporary as he finds himself flying directly into the path of one of those famous Kansas twisters. By the time he has crash-landed he realizes that’s he’s not in Kansas anymore. He finds himself in a wonderfully colorful and exotic place where he is quickly befriended by Theodora (Kunis) who believes him to be the prophesized great wizard. She and her sister Evanora (Weisz) have been keeping the Oz throne warm for his eventual return. He’s tempted with the riches of a kingdom if he’s willing to slay the wicked witch Glinda (Williams). He sets out to his grand task with a talking flying monkey named Finley (Braff) and an injured China Doll (King) whom he is able to repair with some magic from his traveling bag… glue, that is.

Of course, all is not what it appears, and the trio quickly discover that Glinda is actually the good witch and the sisters have the evil agenda. He changes sides, which drives Theodora into the clutches of her much more evil sister. The transformation into the famous green-skinned Wicked Witch of the West is more than even her sister bargained for. She becomes a powerful menace and a woman scorned. It will be up to Oz, the man, to outsmart the witch in order to protect Oz, the place, from her rage.

Disney was very much limited in what parts of the Oz legend we have come to know that they were permitted to use. The Warner Brothers lawyers watched over every aspect of production, ready to leap like winged baboons on the slightest infringement on their property. While the Baum material was fair game, most of us are more familiar with the original film than the books from which it was taken. The wonderful melodies were off limits. So there is no singing of following any yellow brick roads. There is no “Off To See The Wizard“. In fact, there is no singing at all, with the lone exception of a brief tune delivered by the Munchkins, and it’s a very weak effort indeed. Music wasn’t the only thing that Disney needed to stay clear of. Some of the best lines and images we remember are protected and could not be used. That meant that screenwriters Mitchell Kapner, David Lindsay-Abaire and director Sam Raimi had an unenviable task before them.

What they did manage to deliver is quite visually stunning. The first part of the film does take place in black & white with an old full-screen aspect ratio. Just as in the original film, the image becomes gloriously colorful as Oz touches down in Oz. With today’s computer-generated technology, this is a world that could only be dreamed about in 1939. The transition is quite well done, and the production design is stunning. The story certainly honors the important beats. But the magic ends about there.

The first problem is casting. James Franco is a wonderful young actor. His career has taken him on quite a ride of late from Spider-Man’s side-kick. But he’s terribly miscast as Oz and struggles through with a con man’s smile and an obvious awareness that he’s in over his head. He’s entirely too young for the part and fails to fill the mighty shoes of such an essentially strong character. Another bit of unfortunate casting has to be Mila Kunis as Theodora. Again, I think she’s a pretty solid actor in other parts that I’ve seen. She’s given a very awkward character here. She plays a lovesick ignorant girl who just will never measure up to the dominating character so well played by Margaret Hamilton. The character never really appears to have much….well….character, or direction. It gets worse once the transformation is made. Kunis appears completely lost in the powerful role and the makeup or CG facial work is absolutely horrible. Her face looks like a balloon about ready to pop. Again, I don’t really think the fault lies with the actors. Raimi needs to take the hit here and should have done a better job casting the parts. Bruce Campbell is along for his traditional Raimi cameo. One might say he was too old, but Campbell would have made for a brilliant Oz, as would Robert Downey, Jr. for whom the role was originally intended. It’s sad that Raimi had the perfect wizard there on the set but wasted him on an amusing but completely throw-away character. Rachel Weisz is much better as Evanora but is underused in the part. Joey King voices the cute China Girl character, while Zach Braff voices Finely, who is a little too cute and full of wisecracks. He’s fine, but in somewhat smaller doses. In another nod to the original a few actors play multiple roles mirroring their live-action characters. Finely is his assistant and is voiced by the actor who plays his partner in the prologue. The China Girl is voiced by the actress who played a crippled girl that asked Oz to make her walk. In Oz he does help make the China Girl walk.

There are also quite a few nice homage moments to be found. You’ll want to pay attention in order to catch them all. I’m sure I’ll discover even more on a second viewing. Raimi even manages to throw in a line aimed at the Evil Dead fans. To point them all out here robs you of the treasure hunt fun you’ll have during the movie.

In the end we get plenty of spectacle, but we must avoid looking at the man behind the curtain, because, the film fails to capture the heart and soul which has made The Wizard Of Oz such an endearing and enduring classic. Trust me when I tell you that no one will be talking about this movie in 8 years, let alone 80. It’s a rather sweet diversion with plenty of technical magic, but where is the real stuff? You can’t really blame the Warner lawyers for that oversight. Last I checked MGM/Warner Brothers didn’t have a trademark on heart. I suspect Disney thought they had a franchise on their hands, and I do expect we’ll be journeying to Oz again soon. Remember, Oz doesn’t belong to MGM, Warner Brothers, or even Baum himself. “It belongs to you.“

Gino Sassani is a member of the Southeastern Film Critic's Association (SEFCA). He is a film and television critic based in Tampa, Florida. He's also the Senior Editor here at Upcomingdiscs. Gino started reviewing films in the early 1990's as a segment of his local television show Focus. He's an award-winning recording artist for Omega Records. Gino is currently working on his 8th album Merchants & Mercenaries. Gino took over Upcomingdiscs Dec 1, 2008. He works out of a home theater he calls The Reel World. Favorite films: The Godfather, The Godfather Part II, The Body Snatcher (Val Lewton film with Karloff and Lugosi, not the pod people film), Unforgiven, Gladiator, The Lion King, Jaws, Son Of Frankenstein, The Good, The Bad And The Ugly, and Monsters, Inc.
Dead Man Down The Marine 3: Homefront (Blu-ray)