Posted in: Disc Reviews by Gino Sassani on March 7th, 2013 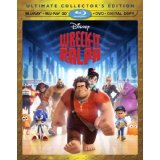 One of the easiest ways to let your age show is to talk about your favorite video games. If you’re old enough, you even remember a time when there weren’t any video games at all. Most people refer to this era as The Dark Ages. But I’m willing to admit that I put a deposit down on an Atari 2600 system these many years ago. If you have a love of all things video games and a great appreciation for the history of the field, Wreck-It Ralph was built just for you.

Wreck-It Ralph picks up on the Toy Story idea. In that universe we learn that our toys have a full life of their own while they are not being played with. Here we discover the same is true of video game characters at the local arcade. They have a large interactive community when the lights go out and the arcade is closed. They can travel from video game to video game, and there’s a central hub between them that resembles a bus terminal. Here game characters of old coexist with the new high-definition characters of the current games. One of the oldest games in the arcade is about to celebrate its 30th anniversary. That game is Fix It Felix. It resembles the Donkey Kong or Mario Brothers games that we’re used to. Ralph destroys an apartment building, and you have to guide Felix (McBrayer) and his magic golden hammer to fix the damage in the allotted time. When you complete a level Felix is awarded a medal and the cheers of the residents of the building, while Ralph is tossed from the roof and left to live in a stump at the dump. Talk about your class warfare or your 99%.

Ralph (Reilly) is having trouble coping with his role as a bad guy. He’s in a therapy group with other bad guys including one of the ghosts from Pac Man. It gets worse when he is not invited to the anniversary party with the rest of the game’s characters. Mayhem results when he crashes the party. There he’s issued a challenge. If he can win a hero medal, they’ll let him live in the penthouse. Of course, the joke’s on Ralph, because he can never win a medal…unless…

Ralph decides to invade a combat game where he ends up getting the medal he so desperately wants. But it’s lost when he ends up in a kiddie racing game called Sugar Rush. There he meets Vanellope (Silverman), a glitch in the game who wants to be a racer. Even though she steals his medal to buy her way into the race, Ralph becomes attached to the girl. Together they have to go up against King Candy (Tudyk), who has his own reasons for keeping her out of the race. Meanwhile Ralph has accidentally released a plague of alien bugs in the sweet land of Sugar Rush which are being handled by Felix and Calhoun (Lynch) from the combat game. If they don’t all succeed by the time the arcade opens again, games will be unplugged and lives will be lost forever. On top of that they have to deal with a blast from the past. Turbo was the first character to cross games, and the results were disastrous. The typical morals of “be happy with who/what you are” are quite obvious.

The plot is actually quite involved. You need a program to identify all of the players. The film combines characters from the fictional games that dominate the film to the appearance of several old-time arcade favorites like QBert and Pac Man. It’s a rather complete and involved world, and you get the impression that, like Toy Story, we’ve only just touched the tip of this iceberg. As animated features go, I was impressed by just how intricate the plot happened to be. There are a few solid B stories going on. The world itself is immersive and full of incredible diversity. It doesn’t take long at all to fall in love with the environment and the characters. It’s obvious that the film was intended to appeal to both children and adults. The Sugar Rush land is so bright and cheerful. Kids rule here, and you know it’s going to go over big, particularly with young girls. Still, while the visuals and action will keep those short-attention-span kiddies entertained, the film contains layer after layer of Easter eggs for the adults in the audience. The kids won’t really understand the nostalgia of it all, but it will keep you just as engaged as they are. I love a film that can appeal across generations so completely. It’s been the secret of The Simpsons for so many years, and it’s on display dominantly in Wreck-It Ralph.

The voice cast is excellent. Sarah Silverman steals the film as the loveable troublemaker who befriends Ralph. There’s such an air of mischief and innocence to her performance. It’s the best work she’s done. Alan Tudyk is almost unrecognizable as the King Candy character, who is pretty much the villain of the piece. It’s the traditional moustache-twirling bad guy that we end up loving to hate. Jane Lynch is not one of my favorite actresses. I don’t know what it is, but I really don’t like any of her characters. Here she actually does some fine work as the Call Of Duty-styled soldier who takes Felix on her mission to track down and kill the bugs who have contaminated the candy game.

The computer-animated graphics are great. Remember that this may not be Pixar, but these are pretty much the same folks. Of course, many of the characters and environments are blocky, reminiscent of the old 16-bit days of video gaming. That’s just part of the style, and while you might think that’s easy to pull off, I can assure you it’s not. These graphics fit seamlessly with those of the high-definition worlds. The 3D wasn’t really a huge bonus. It looked natural enough, but I don’t think you’re losing anything if you can’t play 3D.

Wreck-It Ralph is presented in its original aspect ratio of 2.39:1. The 1080p 3D image is arrived at with an MVC at an average 25/15 mbps. The 3D is far from essential to your enjoyment here. It’s not really used in a “gotchya” way and merely makes the environments that much more immersive. And that’s really the word here. The presentation whether in 3D or not does a wonderful job of bringing these worlds to life. It doesn’t matter if it’s the blocky 8-bit world of Fix It Felix or the dark and foreboding high definition world of Hero’s Duty. The animators did a tremendous job of making these worlds all very unique and lifelike. The Sugar Rush world is, of course, the brightest and most colorful. Here’s where colors really pop from the screen. The image is always razor-sharp, delivering even the “downgraded” images of the nostalgic games with wonderful sharpness and detail. Black levels are inky black and deliver some of the finest shadow layers you’ll likely see anywhere.

The DTS-HD Master Audio 7.1 is quite adept at enhancing the experience for you. The score is quite lively and playful. Still, it never dominates what is happening on the screen. The mix can be quite aggressive, giving life to all of your speakers with something left over for the subs. Dialog is perfect. The sound fields are true to the environments and the clunky sounds of the 8-bit world never sounded better.

Paperman: (6:29) This animated short took an Oscar for that category this year. It’s quite whimsical and fun. It’s also provided in 3D along with the feature film.

Bit By Bit – Creating The World Of Wreck-It Ralph: (16:40) The crew offer us many stories about how the film was created. There are plenty of alternate turns discussed that didn’t make the final cut. You get concept art here as well.

Alternate And Deleted Scenes: (14:28) There are four with an introduction and optional commentary track. Of course, it’s all done through animated storyboards.

Video Game Commercials: There are four short ads that appear for the fictional arcade in the game. They show the evolution of the arcade over the 30 years as well as the games offered.

You get the 3D disc, Blu-ray Copy, DVD Copy and Digital Copy.

It’s all pretty much over-the-top fun, but the film sports a nifty emotional bond. It’s the kind of character that makes films like this have tremendous lasting power. Disney has a winner here, and I suspect that we’re going to be seeing a lot more of this world in the years to come. This stuff will be around when even the nostalgia of it is nostalgia. Imagine a video game with this much heart. “I don’t think such a game exists.”

Gino Sassani is a member of the Southeastern Film Critic's Association (SEFCA). He is a film and television critic based in Tampa, Florida. He's also the Senior Editor here at Upcomingdiscs. Gino started reviewing films in the early 1990's as a segment of his local television show Focus. He's an award-winning recording artist for Omega Records. Gino is currently working on his 8th album Merchants & Mercenaries. Gino took over Upcomingdiscs Dec 1, 2008. He works out of a home theater he calls The Reel World. Favorite films: The Godfather, The Godfather Part II, The Body Snatcher (Val Lewton film with Karloff and Lugosi, not the pod people film), Unforgiven, Gladiator, The Lion King, Jaws, Son Of Frankenstein, The Good, The Bad And The Ugly, and Monsters, Inc.
Special Forces (Blu-ray) Emperor