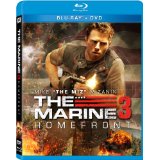 On paper, pro wrestlers are the perfect action movie stars. Their beefy frames and larger-than-life personalities should make them naturals at kicking butt on the big screen, plus the performers are certainly familiar with choreographed combat. (This is the part where I planned to mention that wrestling is fake, but I don’t want to make anybody cry.) Even though Arnold, Sly and their brawny brethren have struggled at the box office recently — and are about 20 years past their heyday — WWE Studios has a sneakily clever thing going with its Marine franchise.

Starting with 2006’s The Marine, the company has created a recognizable and malleable action series. The movies don’t have anything to do with one another beyond the title, but they allow the WWE to push whichever wrestler du jour they want to promote by giving him his very own starring role. In other words, they could make Marine movies forever. Following in the footsteps of John Cena and Ted Dibiase Jr., Mike “The Miz” Mizanin is handed the keys to the action vehicle this time around.

The Miz stars in The Marine 3: Homefront as Jake Carter, a Marine who returns to his small-town Washington home to visit his two sisters: dependable, stressed-out Amanda (Camille Sullivan) and irresponsible Lilly (Ashley Bell). Lilly and her boyfriend (Jeffrey Ballard) stumble onto the path of a radical militia group led by college professor-turned-extremist Jonah Pope (Neal McDonough). Pope is planning a terrorist attack on American soil, so he kidnaps the two youngsters and brings them to his base of operations on an abandoned ferry. Unfortunately for Pope — who doesn’t have any trouble dealing with the local police or FBI — the girl he kidnapped is related to a Marine with elite military skills who also happens to be in town. (Some bad guys just can’t catch a break.)

The film follows the woman-in-peril template established by the two previous Marine movies — though this time, the more paternal protagonist doesn’t have to rescue his wife — and eventually plays out like the sort of “Die Hard-on-a-boat” action flick you’d expect. However, Homefront takes a few unexpected detours on its way there.

For starters, writer-director Scott Wiper — who is something of a “Wrestler Whisperer” after guiding Stone Cold Steve Austin and Nathan Jones in The Condemned, another WWE Studios production — doesn’t really pile on the action until the final 30 minutes when Jake gets on the boat. For a straight-to-video flick with a wrestler in the lead role, waiting until the film’s final third to kick the action into high gear seems like an insane choice. Wiper, however, does a surprisingly nice job of keeping the story engaging as he establishes overprotective Jake’s relationship with his sisters and the bad guy’s motives. You see, Pope isn’t your average movie psychopath. He wants to make a statement about America’s broken financial system — he abhors greedy banks, taking only what he needs for his mission during a robbery and burning the rest — which makes him more of a bad guy with a cause. (Think Ed Harris as Gen. Hummel in The Rock.) Let’s just say I didn’t expect The Marine 3: Homefront to get all topical on me.

I wouldn’t exactly call myself a Mizfit, but I admire the wrestler’s story. (The lifelong wrestling fan first came to prominence on MTV’s The Real World, where he basically called his shot in terms of becoming a WWE superstar.) That being said, I was a bit underwhelmed by his first starring role. I appreciate that Jake is a departure from The Miz’s arrogant on-air persona, but I also thought it sapped a bit too much personality from his performance. As I alluded to earlier, The Miz doesn’t fully get to go into action hero mode — where he’s totally convincing — until pretty late in the film, but the wrestler does an okay job of holding our attention. He benefits from capable support courtesy of professional baddie McDonough (Justified, Desperate Housewives), who always looks scary thanks to his pale features, and the talented Bell (The Last Exorcism), who makes Lilly feistier and less bratty than the character had any right to be.

The Marine 3: Homefront doesn’t break any new ground, but I’m not necessarily looking for a ton of innovation in a movie titled The Marine 3: Homefront. What I am looking for is pulse-quickening action and performances that only make me cringe some of the time. The film takes a bit of a while to get to the exciting, bloody meat of the action — is it bad that I was expecting/hoping this movie would be slightly dumber? — but winds up being a solid, by-the-numbers outing.

The Marine 3: Homefront is presented in an aspect ratio of 1.78:1. The 1080p image is arrived at with an AVC MPEG-4 codec at an average of 32 mpbs. I’ve had the pleasure of reviewing some terrific–looking Blu-rays courtesy of Fox during my time writing for this site, and I was curious to see if that excellence would extend to a crap-tastic, low-budget action flick. To my complete delight, the answer was “yes!” Only a few instances of motion blur — which may or may not have been intentional — give away the project’s modest production values. There is wonderful sharpness in the wide, medium and close-up shots, as well as spot-on color (which really pops in the greenery of our hero’s hometown, but was otherwise suitably muted given the Pacific Northwest setting). The close-ups, in particular, let you see the grime on the redneck’s faces, as well as the blood that eventually covers our hero. Black levels are also nice and deep, which is crucial during the darkened shootout in the boat’s interior. It was nice to see Fox didn’t phone this one in. (Because apparently they don’t phone anything in.)

The DTS-HD Master Audio 5.1 track is pretty much as aggressive as you’d expect for a hefty action film. Besides banging out the film’s generically rousing score, the track gives us some nice atmospheric noises when Jake is out in the woods. I was also impressed by the way sound traveled from the front to the rears when it was appropriate. (During the gunfights, as well as a helicopter flight early on.) The subs (predictably) came to life for the huge explosion at the end, but I thought there was room to add more of a wallop to some of The Miz’s punches. Meanwhile, the dialogue…ha! What am I saying, you don’t care about the dialogue. (For the record, it’s totally audible and mixed quite well with the rest of the track.)

Shipwrecked: Breaking Down the Boat: (8:05) An amusing featurette that takes a closer look at, arguably, the movie’s most important character. Director Scott Wiper points out, “if this were Die Hard, the boat would be Nakatomi Plaza.” We learn the film’s shooting schedule was 20 days, and 10 of those days were spent on the former real-life ferry.

The Miz Rocks the Boat: (8:17) The wrestler gives us a tour of the aforementioned ferry. This is probably one featurette too many dedicated to the boat, but The Miz shows more of his personality in these eight minutes than he did during the entire movie.

The Miz Declassified: (10:07) Profile of the man behind The Miz. Like his character in the movie, he didn’t want to follow the “high school, college, move back home and start a family” template. Instead of joining the Marines, however, Mizanin dreamed of being a WWE superstar. Despite all his on-screen bluster, he comes off like a hard-working, dedicated guy who is eager to learn. We also see some of the weapons training he did in preparation for the film, and hear some complimentary words from co-stars McDonough and Bell.

Casting Call: Ready to Enlist: (7:58) WWE conducted an open audition during Wrestlemania Axxess for a small role in The Marine 3: Homefront: the winner was Army sergeant/WWE fan Mason Norman. We watch The Miz give Mason the good news during an amusing segment, and follow Sgt. Norman on the set as he films his role. Pretty cool stuff and the thrill of a lifetime for any WWE fanatic.

Miz Journal: (6:52) This video diary follows the wrestler as he wakes up at 5:37 a.m. and makes his way to the Vancouver set, where he gets his bloody makeup applied and pals around with the cast and crew.

If you’ve never heard of The Miz , the bonus material on this Blu-ray is particularly useful in showing you what the guy is about. The Marine 3: Homefront may not be awesome, but it’s still a promising start for the WWE superstar and a reasonably entertaining 90 minutes for action fans.