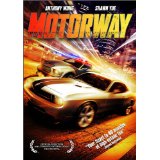 “Don’t let other cars distract you. Take control of your car. Focus on your own lane. 8000rpm, 2km/h. Give it all you got. Steer now. Thinking will only slow you down…If you lose your drive; you are worse off than a broken car.”

Of course none of that quote is spoken in a lick of English in the film. Thank goodness for subtitles; they allow us to enjoy a film despite not knowing the film’s original language, and Motorway is precisely that: an enjoyment. It doesn’t have the same exact flare of the Fast & Furious series (not including 2 Fast 2 Furious and Tokyo Drift), but it’s original unto itself.

Motorway features a mentor and protégé relationship between two officers of the Stealth Riders division, a covert section consisting of the best drivers on the police force dedicated to pursing underground street racing. The protégé is a rookie on the force, eager for the thrill of the chase and constantly going beyond the parameters set before him; he has the skill to be great but lacks the knowledge and discipline it takes to achieve it. He is partnered with a veteran cop, once thought to be the best driver in the division; he has the skill, but a crash that landed him in the hospital and nearly cost him his life has stripped him of his former drive, and now his only thoughts are of retirement.

Though partnered in the beginning, the two are anything but. The rookie has no respect for the veteran, seeing him as someone that shouldn’t even be part of the division, and in turn the veteran views the rookie as a hothead who is much too confident to ever fully master what it takes to become the best. When a legendary getaway driver, known for his skill and for being nearly impossible to capture, stages a raid on the precinct, these two halves must become one if they are to catch him.

Motorway is an intriguing and compelling story; the mentor and protégé dynamic is electric and can be felt despite the language barrier. The development of it stalled a bit in the beginning, mainly on the part of the veteran who originally just appeared to be a lazy cop instead of someone who had been through a trauma that shook them to their core. Perhaps if the accident had been mentioned more towards the beginning rather than the middle, understanding of the veteran character would have been expedited.  However, as I said, this only hampers the dynamic momentarily; once understanding is reached, the character takes on new meaning and becomes the prominent figurehead of the film.

The first pursuits of the antagonist are exciting, though the lack of music at the beginning was a new experience for me. I’m used to an upbeat tempo that usually emphasizes the sequence; here it is different. No score at the beginning; it fades in a little bit after the chase has begun, allowing the gear shifts and acceleration of the engine to add to the suspense of the chase. It’s simpler but also lends a more authentic and elegant view of the chases. The final pursuit is the culmination of the film’s hard work as it employs flashback techniques at the right moment to signify the rookie’s evolution from talented hothead to the driver he desired to become.

Jeremy Butler is a film school graduate of the International Academy of Design and Technology. He is been writing for Upcomingdiscs since 2012; however, movies have played a big part of his life for much longer. Favorite genres include horror, science fiction/fantasy, and comedy. Favorite movies are V for Vendetta, Boondocks Saints, Kiss Kiss Bang Bang, and The Godfather.
Smashed (Blu-ray) Border Run (Blu-ray)