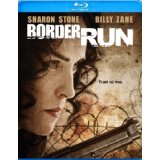 “The border between the United States and Mexico spans 2,000 miles. It’s also the most frequently crossed land border in the entire world. And that just refers to legal crossings…”

Hundreds of thousands of people — we’re told at the start of Border Run — try to cross that boundary every year, and each of them has a unique story. Unfortunately, the filmmakers botched a great opportunity to explore the thorny issue of illegal immigration in a thoughtful and stimulating way by choosing to tell the most ridiculous and off-putting story they could possibly think of.

Border Run stars Sharon Stone as Sofie Talbert, a “Gotcha” TV reporter in Phoenix who starts off the film by nailing a left-leaning senator for her secretly soft stance on illegal immigration. Meanwhile, Sofie’s do-gooder brother Aaron (Billy Zane) works for an organization that provides relief to illegals. After an alarming phone call with Aaron ends with a gunshot on his end, Sofie embarks on a harrowing journey to the border to find out what happened to her brother. Sofie is alternately aided by Roberto (Manolo Cardona), a kindly co-worker of Aaron’s, and Javier (Miguel Rodarte), a shadier character who shows Sofie the ins and outs of crossing the border illegally.

The movie, clumsily directed with the subtlety of a sledgehammer by Argentine filmmaker Gabriela Tagliavani, is at its most competent when it’s depicting the harrowing and degrading conditions many illegal immigrants endure to enter the U.S. More alarmingly, Tagliavani herself only seems to come alive as a filmmaker when she’s staging a hideous assault on Sofie, who non-surprisingly comes to sympathize with the plight of the illegal immigrant. Border Run has both feet firmly planted in thriller territory, so there’s no room for even a rudimentary examination of why so many people bypass the process of legal immigration to risk their lives for the abstract idea of a better life. (If that’s what you’re looking for, you’d be better of checking out, well, A Better Life.)

Don’t get me wrong: the cheap thriller tract would’ve been perfectly acceptable if the filmmakers had pulled it off effectively. I feel like Tagliavani, along with writers Don Fiebiger and Amy Kolquist, revealed Aaron’s fate too soon. It would’ve been more exciting — and we would’ve identified more with our protagonist — if we wondered whether Aaron was still alive along with Sofie for a little longer. I also didn’t buy the way Sofie made romantic googly eyes at each of her helpers. (Sofie taking the time to dirty dance with Roberto in a dive bar while allegedly believing her beloved brother was in mortal danger was particularly dumbfounding.)

Of course, a big part of this damage could’ve been mitigated if Border Run had gotten a strong lead performance from Stone, who has been a consistently dynamic presence on screen even if her movies don’t always pop. Instead, Stone — sporting an inexplicable rat’s nest of a jet-black hair do — is, to use the technical term, a hot mess in this film. (Late-career Joan Collins thought Stone was over the top.) Sofie’s ordeal is unquestionably traumatic, but it doesn’t explain why Stone is the only person in the cast emoting like she’s in a silent film. Zane, by the nature of his role, doesn’t have much to do, but at least he looks considerably better here than the last time I saw him in Leprechaun’s Revenge. Stone (also an executive producer on the project) and Zane are the two bold-faced names in the cast, but I was most impressed by a pair of Mexican actors. Rodarte brought some convincing soulfulness to his scoundrel of a character, while Giovanna Zacarias was legitimately scary in her handful of scenes as the cruel “coyote”/smuggler Sofie and company encounter on their way to the U.S.

Border Run sneaks in a couple of twists and turns into its final act, which also gives Stone an actorly showcase scene where she gets to yell “It’s not that simple!” after someone asks her if a dead companion was an illegal alien. By then, though, it’s much too late to get this train wreck back on track.

Border Run is presented in an aspect ratio of 2.35:1. The 1080p image is arrived at with an AVC MPEG-4 codec at an average of 27 mbps. In terms of color, the Blu-ray effectively presents the yellowish hue that has become synonymous with films that take place south of the border. As a result, day time scenes looked good, but I was even more impressed by the mostly strong black levels, which played a crucial part in the darkened opening scene as well as the claustrophobic sequences inside the crawl spaces where the immigrants hid. There was good sharpness and clarity throughout — the HD close-ups of Stone, however, were not her friend on this project — but a few shots revealed some aliasing and banding.

The Dolby TrueHD 5.1 track is nicely balanced and mixed quite well. The dialogue is always audible and plays well with the evocative score from Emilio and Sebastian Kauderer, which isn’t afraid to work in a little Spanish guitar. Gun fire isn’t exactly plentiful, but it pops in from all the speakers when it happens. Subs impressively rumbled to life during the cramped, immersive rides in a tanker truck, but were never overused. All things considered, the audio track is the most nuanced thing about this entire project.

The Border Run Blu-ray is completely devoid of special features, which is disappointing because I would’ve liked to have heard if the cast and crew had personal connections to the issues explored in the film or why Stone took on a project that dealt with such a hot-button topic. (At the very least, they could’ve devoted a whole featurette to Stone’s horrific fright wig; though I’m guessing no one’s in a hurry to take credit for that one.) The only way to enjoy this one is with rock-bottom expectations, so why bother at all?