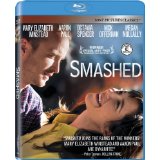 Movies that deal with alcoholism tend to either be relentless downers (Leaving Las Vegas, When a Man Loves a Woman) or use drunkenness as a catalyst for Hangover-style shenanigans and tipsy laughs (Arthur; Dean Martin’s entire act). In other words, drunks on film don’t usually look like Mary Elizabeth Winstead in Smashed, the brisk, well-acted dramedy from writer-director James Ponsoldt.

In the same year we were treated to a couple of staggering, Oscar-nominated drunk performances from Denzel Washington and Joaquin Phoenix, Winstead’s own terrific work got understandably lost in the shuffle. The actress stars as Kate, a young, charismatic 1st grade teacher with a serious alcohol problem and an equally irresponsible husband named Charlie (Emmy winner Aaron Paul, Breaking Bad). Winstead spends the first 30 or so minutes of Smashed acting drunk, hungover or high. In that same timeframe, we watch Kate pee and puke in public. She also drives (and bikes) while intoxicated. Kate is such a mess that when someone suggests she smoke a little bit of crack to sober up, it seems like a perfectly reasonable idea to her.

Eventually, Kate discovers one of her fellow faculty members (the marvelously deadpan Nick Offerman, Parks and Recreation) is a former addict and accompanies him to a support group. With the help of a firm, forthright sponsor (Oscar winner Octavia Spencer, The Help), Kate decides to get sober. She doesn’t get very much support from Charlie, who misses the wild and crazy gal his wife used to be. (Charlie works from home, so he doesn’t have to worry about hiding his disease from co-workers or a room full of little kids.)

The deterioration of Kate and Charlie’s marriage — which recalls the main relationship in Days of Wine and Roses — serves as the film’s anchor and is handled with great care by Winstead and Paul. The two have an excellent, climactic argument followed shortly by a more forced, melodramatic domestic dust-up before wrapping things up with the film’s lovely, ambiguous final scene. The problem is Kate and Charlie don’t seem to have much in common beyond their love for alcohol, which gives Ponsoldt and co-writer Susan Burke the chance to explore exactly what it is that keeps couples together. Heck, I remember my girlfriend getting annoyed with me a few years ago because I wouldn’t change my eating habits to match hers.

The downside is there’s not enough room within the film’s slim 81-minute running time to delve into other provocative issues. These include exploring the point where a person goes from “liking to drink a lot” to being a full-blown alcoholic, or a more in-depth look at the sponsor relationship. (Spencer is good, but underutilized.) On the other hand, the single scene with Kate’s mom (Mary Kay Place) was more than enough to suggest how Kate got hooked on the bottle. Although, Smashed clearly deals with a serious subject, Ponsoldt smartly sprinkled in some very funny people — Offerman, plus his real-life wife Megan Mullally (Will & Grace) — and gave them the liberty to improvise. The resulting humor is more successful and less forced than the plot thread involving a protracted fake pregnancy at Kate’s school.

I said it before, but it’s worth saying again: Winstead is terrific in this movie. I’ve been impressed by some of her work in genre films like Scott Pilgrim vs. The World, but this is the first time I’ve really seen her shine in a dramatic role. Her round, expressive face is not what we ordinarily associate with the face of alcoholism — you may have noticed most of the movie drunks I mentioned in the first two paragraphs are men — but it’s great at conveying both sadness and exhilaration.

Most importantly, Winstead is the biggest reason Smashed was able to bring some lightness to a somber topic without making it feel like a joke. Her unglamorous prettiness and spirit keep the audience from feeling too down in the dumps, even as Kate literally wakes up among garbage.

Smashed is presented in an aspect ratio of 1.85:1. The 1080p image is arrived at with an AVC MPEG-4 codec at an average of 25 mbps. The Blu-ray gives us a sharp image that is pleasing without betraying the naturalistic vibe the director was going for. (Ponsoldt’s directive to cinematographer Tobias Datum seemed to be, “Make the camera lazily stick with Kate as she stumbles around.”) The clarity is especially effective when the camera gets nice and intimate with Winstead’s face during Kate’s first visit to the support group and enhances the actress’s vanity-free performance. Strong black levels help bring the nighttime scenes to life and feel more authentic. A bit of high contrast makes the image occasionally feel a bit unreal, which serves to mirror Kate’s woozy state of mind. Meanwhile, colors are suitably muted during the grim scenes in the support group, as well as Kate and Charlie’s messy home. Overall, this is a very good transfer, especially when you consider the film’s modest budget and handheld filming style.

The DTS-HD Master Audio 5.1 track gives the viewer crystal clear dialogue — the most important thing with talky films like this one — and understated atmospheric noises from the funky part of downtown Los Angeles where Kate and Charlie seem to live. Though I liked the jangly score by Andy Cabic and Eric D. Johnson — the upbeat music carried an undercurrent of sadness when paired with the tragicomic images happening on screen — the musical moments would’ve benefited from a slightly better mix. The score filled the speakers well enough, but the subs would occasionally rumble to life for no particular reason when an innocuous bit of music was playing. Fortunately, there usually wasn’t any dialogue during the sequences when the score and subs randomly dominated the sound field.

Commentary with director James Ponsoldt and actress Mary Elizabeth Winstead: This jokey, genial track was recorded about a year after the 19-day Smashed shoot, but Ponsoldt and Winstead’s personal and professional recollections of making this film are very vivid. Winstead was grateful that her character wasn’t completely tortured and discusses smoking crack on film. (Well, the sugary confection that stood in for crack. She also reveals the fake alcoholic drinks were always very sweet.) Ponsoldt, meanwhile, admits they had a crack smoking advisor on the set, but doesn’t reveal any names. I do wish co-writer Susan Burke had been around because Ponsoldt mentions that her escapades inspired the film, along with the idea of making this story with a female protagonist.

Making Smashed: (12:23) Much better than the average behind-the-scenes doc, this featurette give us a mixture of on-the-set footage — including material that didn’t make the final cut — combined with insightful (and complimentary) commentary from the director and his cast. Ponsoldt says he wanted to make a coming-of-age story that was not a “message film.” Winstead talks about the challenge of playing drunk (“You don’t play drunk; when you’re drunk, you’re trying to act sober”) while Offerman prefers working on tiny indies because they feel like theater troupes.

Toronto Film Festival Red Carpet and Q&A: (14:45) The red carpet portion rehashes a lot of the same stuff covered in “Making Smashed”, though Winstead admits to going out drinking with some colleagues before filming and throwing up in front of Aaron Paul. The post-screening Q&A featured Ponsoldt, Winstead, Octavia Spencer and producer Jennifer Cochis, and also re-visits most of the same information from the commentary track and the previous featurette. (Winstead accompanied Burke to a few AA meetings.)

Deleted Scenes: (10:25) If you’re in the mood to hear a sweet elderly couple sing a shaky rendition of “Danny Boy,” you came to the right place. Among these six scenes, you’ll also find a well-acted expansion of the first support group meeting and a longer version of the final scene. What you won’t find is a crucial-sounding scene mentioned by Ponsoldt in “Making Smashed“, which is a bit odd. Decent material, but ultimately skippable. Features a Play All option.

For the most part, Smashed successfully splits the difference between the broad portrayals of alcoholism on film. The film isn’t perfect and may have actually benefited from an extra 10-15 minutes, but it deserves credit for addressing a common problem in an uncommon manner. (And with an uncommon protagonist.)

Click here for ratings and reviews of Michael’s House rehab