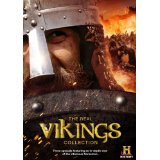 The Real Vikings is a DVD collection put out by the History channel and is comprised of three separately-produced programs about the reign of the Vikings.

The last one is the best and is part of the Warriors series hosted by Green Beret Terry Schappert.  Schappert delves into some of the key battles of the early Viking invasions and the methods that made them such effective warriors. In the late 8th century A.D. the Viking state is disorganized, and the easiest route to fame and glory is through conquest. Conquests then would lead to a rallying behind a leader. In 793 A.D., The sacking of the monastery at Lindisfarne in Northern England sends shock waves through Christian Europe because of its senseless and merciless violence. The Vikings superiority was based on ships which were designed to strike anywhere. Viking warriors were driven by a culture that revered death in battle and made them utterly fearless. It was an honor to be first in battle. They trained relentlessly with many unique techniques and weapons. By the 9th and 10th century the Vikings raided anywhere and everywhere unexpectedly, and their mere appearance was often enough to cause their victims to give up. The program also goes into details about weapons, armor, forts, battle styles, and most importantly of all, the invincibility of the Viking war ships.

Olaf Tryggvason is the heir to Norway’s first king, and during the height of Viking power and dominance embarks on daring attacks on the British Isles. In 991 A.D., Olaf with a fleet of 93 ships and 4000 men goes to raid the royal mint. Olaf devastates Ipswich, Sandwich, and Folkstone before meeting the Saxons with a pivotal battle at Maldon. Because of marshy conditions they will have to fight on land without the element of surprise and by crossing a very narrow path across the water a few warriors at a time. Somehow their ferocity and fearlessness breaks the British defenses and beheads their leader, Byrthnoth.

The middle special is part of Lost Worlds series. It is somewhat drier and more academic.

It talks of Eric the Red, Ivar the Boneless, and Harold Blue tooth, some of the famous pagan warriors who sailed to many unknown areas of the world. This culture of violence lasted about 300 years before converting to Christianity and settling down to peace and prosperity. In fact, women were revered in their society and had more rights and privileges than women in other parts of the world.

The first segment is hosted by Richard Karns (Home Improvement) and is heavily focused on comedy. It makes reference to the Minnesota Vikings and Hagar the Horrible being the first henpecked husband just to make cheap jokes. It’s titled “Foot Soldiers: The Vikings”. Still, it offers interesting facts not covered in the other two. One such fact is that Vikings preferred beer and wine to water because water was likely to make you deathly ill. It also mentions the Beserkers named after a bear shirt. It suggests they took hallucinogenic mushrooms to aid them going into battle with mindless abandon.

The Vikings were actually the only marauding pirates of the day. Most of Scandinavian society was relatively peaceful dairymen and farmers.

In 855 A.D., they decided they were going to live a more domesticated life amidst all the raping and pillaging and settled in Britain. The women apparently liked the larger size of these men and that they had whalebone combs. Ragnar took 120 ships to Paris, and they were paid a king’s ransom to leave. They went as far as Constantinople. It all seems very romantic and exciting. Thank goodness we live in more civilized times. By the way, a scripted Viking series is currently playing on the History Channel.