Posted in: The Reel World by Brent Lorentson on March 15th, 2013 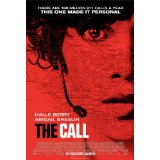 Some movies have a way of simply sneaking up on you and leave you exiting the theater with a multitude of thoughts and emotions.  When a film comes along where you are able to forget your troubles or the stresses of the real world, and long after the final credit has rolled you still can’t shake certain images or lines of dialog from your mind, this is usually the best sign of a good film.  The Call I must confess snuck up on me and managed to suck me into “the hive” of the Los Angeles 911 dispatch center and has kept me in its clutches as I write up this review.  The Call is a film that reminds me why we go to the theater with a large audience and experience this projected story on screen, where despite all the nifty home theater toys you may have, it just cannot compare to seeing a film with an audience.

The Call wastes no time pulling us into the story.  Jordan Turner (Halle Berry) is one of many 911 dispatchers handling calls as they come in.  Some calls maybe as trivial as a man with a habit of calling the operators from behind bars, to men confessing to recently killing their wives.  Call after call we see how the operators are forced to stay calm and remain in control of the situation until “help” arrives for the caller.  But that all changes as Jordan receives as call from a frightened young girl who has an intruder coming into her home.  Jordan does all she can to navigate Leah to safety from the intruder, but one mistake results in the capture of the young girl.

Jumping ahead six months, Turner is off the phones and is now an instructor for the new blood that will be working the phones.  She continues to carry the guilt from that night and as a result is on anxiety pills.  What makes Berry so likeable in this role is how she’s able to project her fragility, never once acting like a victim but simply being human carrying this guilt around.  Before The Call I was never much of a fan, but in this role, she had me hooked.

Getting into the meat of the story we follow Casey Welson (Abigail Breslin) walking around the mall with one of her friends.  But after Casey is left alone at the mall things are not looking good as she’s been shadowed the entire time by a mysterious man.  The man makes his move and puts Casey in the trunk of the car the film takes off.  From the moment dispatch receives the frantic call from Casey, the film refuses to let up its grip till the final act.

Jordan reluctantly takes over the call as she sees the woman previously handling the call is panicked and simply doesn’t know what to do.  Seeing this transition for Jordan as she herself has to overcome her panic and take charge of the call is one of many moments that sold me on this film being more than just a simple thriller.  The exchanges between Berry and Breslin over the phone are so intense and emotionally charged that only an elite few could have pulled off these roles.

Casey refuses to simply give up to her kidnapper as Jordan helps console and suggests numerous ways to helping her to escape the trunk of the car (or to at least be noticed by passersby).  The kidnapper can’t seem to catch a break as regular citizens seem to thwart his well-laid plans and complicate matters.  When good citizens try to step up and do the right thing in this film, it seems to end violently and only escalate the tension.  And once we discover what drives this kidnapper to do what it is he does to his victims, for once with a horrifying breath of fresh air we get a villain that actually has some depraved depth.

Unfortunately what I was once ready to call “the Silence of the Lambs for a new generation” quickly shifts gears in the third act and simply becomes a by-the-numbers slasher film.  Sure, an audience will find the ending satisfying, and to a degree I still enjoyed the ending, but I  expected something different.  Why give us two well-crafted female roles that make it clear these are no dumb broads, but yet they make the same mistakes you find stereotypical horror characters making in a Friday the 13th film?

Staying away from wide shots and keeping the camera tight on the characters, director Brad Anderson understands it’s the performances that will drive this picture, and if we don’t believe the emotions the film will simply fall apart.  Previously director Joel Schumacher (Batman and Robin, Phonebooth) was attached to direct this but dropped out when Berry originally had to leave the film due to scheduling conflicts.  I’m curious what kind of film we could have had instead, but Anderson’s unique style is what I believe elevates this film from a typical thriller to dare I say what could become a modern classic of the genre.

I can’t recommend this movie enough.  This is a film that is thrilling, exciting, and sets itself apart from all the other blockbusters.  This is a film where the performances drive it to the very end.  I have a feeling if the box office numbers are good there will be a sequel right around the corner, and for once that may not be such a bad thing.

Brent Lorentson is a horror writer and film critic based out of Tampa, Florida. With a BA in Digital Film, he co-wrote and co-directed Scavenger Hunt. His short stories have appeared in various horror anthologies. In 2019 his short script Fertile Blood will be a part of the anthology horror film Slumber Party. He is currently working on his first novel A Dark and Secret Place set to be released in late 2019. Favorite Films: Taxi Driver, Fight Club, I Saw the Devil, The Wild Bunch, Dawn of the Dead, A Clockwork Orange, Pulp Fiction, Heathers, The Monster Squad, and High Fidelity.
The Incredible Burt Wonderstone The Mob Doctor: The Complete Series