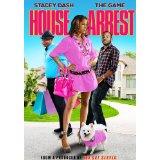 Sometimes you really can judge a  terrible movie by its cover. Beyond the awful Photoshopped shot of the film’s stars, the cover art for House Arrest boasts that the movie comes “From a Producer of You Got Served.” That set off a bunch of questions in my curious mind. Why just one producer? Is this really something a person would brag about? Most importantly, where are all the hip hop dance battles?! Worse than all that, the film itself completely muddles a worthwhile message about faith and the importance of family with shoddy storytelling and a steady stream of substandard performances.

House Arrest quickly introduces us to Chanel (Stacey Dash), a spoiled L.A. rich girl living the high life with her boyfriend, DeAndre (Jayceon “The Game” Taylor). You can tell Chanel is spoiled because she even has a tiny dog named Trixie that she carries around in her purse. While out shopping one day, Chanel and DeAndre are both arrested for the robbery of some valuable computer chips. (The crime is so vague and ultimately pointless that they may as well have been accused of stealing a box of vintage floppy disks.) Prior offender DeAndre is sent to prison while first-time offender Chanel is sentenced to house arrest in a much less ostentatious part of town under the roof of grandma Mee-Mah (Bebe Drake) and Chanel’s daughter Autumn (Kiera Washington). Chanel is innocent, but Deandre asks her to take the fall because she’d probably only get a probation — this guy is a real sweetheart — and because DeAndre’s crimes helped fund their expensive lifestyle.

The idea of Chanel profiting from DeAndre’s criminal activity even though she wasn’t complicit in the actual robbery is very interesting. So naturally, it’s a thread that House Arrest ignores in favor of telling a generic and thoroughly unconvincing redemption story.

Naming the lead character Chanel and cannily casting Dash — who had her breakout as a spoiled teen in Clueless — are the only glimmers of wit in this project. (Well, that and Chanel trying to bejewel her ankle monitor.) The ageless Dash still looks incredible and, honestly, the best thing about House Arrest is that she’s in almost every scene. Beyond looking the part, she’s pretty bad in the movie and gets little help from a weak supporting cast.

Like most rappers, The Game has a handful of acting credits to his name, but brings little beyond a thuggish persona to DeAndre. (At least he’s not in the movie too much.) The worst offender is Red Grant as Fran-Swah, Chanel’s flamboyant gay best friend. Grant is clearly supposed to be the film’s comic relief, but the fact that his character encompasses every outdated gay cliché makes him totally tiresome. Instead of wasting too much time on ignorant bigots, the gay community should also be protesting clownish characters like Fran-Swah. Washington is appropriately cute as the little girl who warms Chanel’s heart, so I won’t spend too much time bashing a little kid’s bad acting. At least Drake is convincingly maternal as Mee-Mah.

Of course, a little amateurish acting and the fact that parts of House Arrest look like they were filmed with a cheap camcorder could’ve been forgivable if the story had a strong foundation or was told with style. Unfortunately, first-time director William Washington’s film looks exactly like an effort from a first-time director. Washington employs unnecessary slow motion, invasive song cues, and dopey voice-over narration that occasionally gives us a glimpse into Chanel’s thoughts. And don’t think the script by Andrea Weathersby is getting off the hook. Besides surprisingly squandering the potential for fish-out-of-water humor as Chanel struggles to adapt to her new environment, her conversion to a more humble person doesn’t feel like it comes from anything that happens in the story so much as it comes from the movie nearing the end of its 103-minute running time. Chanel’s reconnection with Autumn’s daddy, Chris (Chico Benymon), feels similarly inevitable, even though Chris is only in the movie for about 10 minutes.

I went into this one with low expectations, and I was still disappointed. I mean, I wouldn’t even recommend House Arrest to people who are actually under house arrest and have a ton of time on their hands. Read a book instead.

The Hobbit: An Unexpected Journey (Blu-ray) Men at Work: The Complete First Season