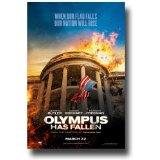 It’s like I always tell people, the only thing better than one gloriously over-the-top action spectacle centered around an attack on the White House is TWO gloriously over-the-top action spectacles centered around an attack on the White House. Lucky(?) for us, Hollywood is happy to oblige in 2013. Channing Tatum gets a chance to protect Jamie Foxx from a very hostile takeover in June’s White House Down, but they’ve been beaten to the box office punch by Gerard Butler and Aaron Eckhart in the junky, wildly entertaining, and more mythical-sounding Olympus Has Fallen.

This one-two punch of presidential peril is the latest, inexplicable example of two films with similar themes being released in theaters within months of each other. In years past, we’ve had dueling volcanoes (Dante’s Peak vs. Volcano) asteroids/comets (Deep Impact vs. Armageddon), Truman Capote movies (Capote vs. Infamous) and, just last year, revisionist Snow White tales (Mirror Mirror vs. Snow White and the Huntsman). It’s an odd group of pairings, but frankly I’m a little surprised it took this long for Hollywood to make what is basically “Die Hard in the White House.”

“The most protected building on Earth has fallen.”

The film opens by establishing that Secret Service agent Mike Banning (Gerard Butler) is quite friendly with President Benjamin Asher (Aaron Eckhart), the charismatic Commander-in-Chief with a picture-perfect family which includes First Lady Margaret (Ashley Judd) and precocious son Connor (Finley Jacobsen). After tragedy strikes — let me put it this way; I hope you’re not only seeing this movie because you’re a big Ashley Judd fan — Banning is pulled off the president’s detail.

Of course, our disgraced hero happens to be in close proximity to the White House (code name: Olympus) when the building is attacked and taken over by a group of North Koreans led by terrorist mastermind Kang (Rick Yune). As Kang holds the president and a few key staff members hostage in an underground bunker, Banning gets his marching orders from House Speaker/Acting President Alan Trumbull (Morgan Freeman) while using his Special Forces training and intimate knowledge of the White House to take out the Korean commandos.

From the very first frame — a shot of the American flag waving triumphantly in the wind that will later be juxtaposed with a ripped, charred version of the flag being tossed from White House roof — it’s immediately obvious director Antoine Fuqua (Training Day, Tears of the Sun) is not going for subtlety. That feeling is confirmed during the 20-minute siege on the White House, which Fuqua presents as a mesmerizing orgy of violence involving a C-130 cargo plane, suicide bombers and much more. I don’t know about you, but I still can’t totally look at a post-9/11, big-screen terrorist attack on U.S. soil without cringing just a little bit; especially when said attack targets famous landmarks. (The movie focuses on the White House, but the Washington Monument doesn’t get out of this thing unscathed.) The reason this crucial sequence works is because Fuqua stages it with an involving, go-for-broke verve that simultaneously sucks you into the horror yet keeps it undeniably unreal and movie-ish.

Fuqua, working from a blunt script by Creighton Rothenberger and Katrin Benedikt that could’ve just as easily been written in 1993, has also placed a strong emphasis on the resourcefulness and resilience of the American spirit. I daresay Olympus Has Fallen actually out-Die Hards the two most recent Die Hard movies once the action shifts inside the White House and Banning becomes the best hope we’ve got. (At one point, Banning literally says, “with all due respect, I’m the best hope you’ve got.”) There’s even a scene where Banning comes across a seemingly friendly face that is actually out to kill him, which is a direct descendant of the “Bill Clay” scene from the first Die Hard.

I wish Butler would stop accepting roles that require him to put on a fake American accent because he’s almost as bad at it as Hans Gruber. Thankfully, he’s totally convincing when he’s in action hero mode and displays a light touch when it’s necessary (whether it’s delivering a one-liner or dealing with the president’s son). A movie like this doesn’t typically require or inspire career-best work from actors, so we get talented performers doing variations on what has already worked for them.

Eckhart draws on the same square-jawed intensity that made him a great Harvey Dent in The Dark Knight to play the president. Morgan Freeman reaches back to his Deep Impact presidential term to play Trumbull while also contributing humor that I’m not sure was in the script with his sly line readings. Angela Bassett — as the director of the Secret Service — is once again underused in a blandly authoritative role, while Dylan McDermott turns up once again as a fellow Secret Service agent even after things didn’t work out so well for him In the Line of Fire. Finally, Yune is nasty but ultimately nothing to write home about as the main villain, while Melissa Leo — as the Secretary of Defense — takes a punch and a beating better than any Oscar winner since Robert DeNiro in Raging Bull.

Olympus Has Fallen isn’t quite a perfectly-oiled action machine — subplots involving tension between Banning and Trumbull, as well as a threat to Banning’s wife are introduced and summarily dropped — and the film is clearly far from original. On the other hand, it’s also a roaring good time and a callback to the explosive action movies of the ‘90s. (I’ll let you decide if that’s a good thing or bad thing; to me, it’s an awesome thing.) Even if you don’t enjoy this film, I have good news; there’s another one just like it coming out in about three months that you might like better.

Day of the Falcon (Blu-ray) Admission