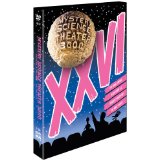 Mystery Science Theatre is an acquired taste. For me, I’ve really got to be in that certain mood to watch it. That’s the beauty of these DVDs. You pop them in when you’re ready. The idea is pretty whacked. Depending on the season you’ve got, Joel or Mike is trapped in space on the “Satellite of Love”. Doomed to spend his life watching very bad films, our hero makes the best of a bad situation. He uses his resources to construct a few robot pals. There’s Crow T. Robot (Beaulieu), Tom Servo (Murphy), and Gypsy (Mallon). Part of an experiment together, they watch the films from the front row, constantly ranting throughout. If you’re like me, you’ve invited a few friends over to watch a schlock festival. The movies weren’t as important as the banter you created while watching. That’s exactly what you see here. The silhouettes of our host and his robots dominate the lower portion of the screen, where they provide alternative dialog and sometimes witty commentary on the action. The two evil station owners/mad scientists send them a new bad film each week to observe their reactions to the bombs. The films are broken up by off-the-wall skits and fake commercials to alleviate the tedium. The collection includes three Mike and one Joel episode.

This collection features three really bad movies, even by MST3K standards, but one that is quite better than the films usually riffed here. The inclusion of The Mole People is a bit of a mystery itself. The film is a Universal property which goes against the normal usage of public domain or small studio titles that wouldn’t cost a heck of a lot in royalties. Remember that the show was a cable public access show for a while and even under Comedy Central there was not a huge budget to do these films. No question that the inclusion of The Mole People makes this one of the better sets to be offered of the show.

Unfortunately, the other entries are quite bad, which is good for riffing.

The Magic Sword is a typical Burt I. Gordon film with all of the expected stock footage and lame f/x. The film does star Basil Rathbone as an evil sorcerer and Star Trek’s Gary Lockwood as a young adventurer who falls in love from afar with Princess Helene, played by Anne Helm. He joins with Sir Branton (Sullivan) who is also his rival for the princess’s affections. Together they face the seven rings of challenges to rescue the poor girl before Rathbone feeds her to his dragon out of revenge on the King. Look for Bewitched‘s Estelle Winwood as Lockwood’s magical mother.

Danger Death Ray is one of the slowest-moving films you’ll ever have seen. It’s a James Bond rip-off with none of the charm or suave going for it. Gordon Scott plays secret agent Fargo, Scott Fargo. He has to stop an evil scientist who stole a death ray. The inventor created said death ray for “peaceful purposes”.

Alien From L.A. is perfect evidence of why Kathy Ireland is a better model than an actress. She plays a girl who is searching for her long-thought-dead father. Actually dad fell into a huge hole and ended up in the underground lost city of Atlantis. They hate surface-dwellers, and Kathy finds herself in one jam after another trying to rescue Dad. The worst part of the film won’t be found in the weak plot, terrible pacing, or even Ireland’s really bad acting. It’s her voice that will just drive you crazy here. Anyone who has seen this film knows exactly what I’m talking about, and you will, too. It’ll take all of five seconds.

There are some classic skits to be found on the set. TV Frank becomes a big-time Hollywood agent. Lawgivers Daze is a very good Planet Of The Apes bit with pretty good masks. Crowe discovers evidence of an earlier Crowe being, or was that just him 500 years ago? The best is an ad for Basil Rathbone Dog Treats.

There is only 1 Joel episode and three Mike episodes. Extras include a feature on Burt I. Gordon and an after-MST3K talk with Mike.

You gotta love how this stuff endures. At times it almost makes some of this crap worth watching. Then again, “In this thin air it’s possible to imagine anything”.

Gino Sassani is a member of the Southeastern Film Critic's Association (SEFCA). He is a film and television critic based in Tampa, Florida. He's also the Senior Editor here at Upcomingdiscs. Gino started reviewing films in the early 1990's as a segment of his local television show Focus. He's an award-winning recording artist for Omega Records. Gino is currently working on his 8th album Merchants & Mercenaries. Gino took over Upcomingdiscs Dec 1, 2008. He works out of a home theater he calls The Reel World. Favorite films: The Godfather, The Godfather Part II, The Body Snatcher (Val Lewton film with Karloff and Lugosi, not the pod people film), Unforgiven, Gladiator, The Lion King, Jaws, Son Of Frankenstein, The Good, The Bad And The Ugly, and Monsters, Inc.
Hemingway & Gellhorn (Blu-ray) Regular Show: Party Pack 3