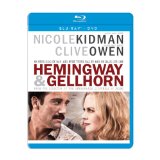 “The important thing for a writer is to tell a good story.”

Martha Gellhorn, considered by some to be the greatest war correspondent of the 20th century, was extremely adamant about not wanting to be a footnote in someone else’s life. So I’m thinking the writer — who died in 1998 — may have had mixed feelings about Hemingway & Gellhorn. On one hand, her life story gets the prestigious (and mostly sympathetic) HBO Films treatment, and Gellhorn is played by Oscar winner Nicole Kidman in a sensational, searing turn. On the other hand, the film had Gellhorn’s 60-year career covering every major world conflict to draw from, yet largely focuses on her combustible nine-year relationship — and five-year marriage — to Ernest Hemingway. I mean Gellhorn couldn’t even wrangle top billing in the film’s title, for crying out loud!

I actually don’t have a problem with a more precise approach to telling an icon’s life story. If the film had tried to cover too much of Gellhorn’s decades-long career, it would likely sprawl and meander, and we’d wind up with another J. Edgar. (Except the old-age makeup in this film — which makes brief, key appearances — is actually convincing.)

Hemingway & Gellhorn covers the writers’ first meeting in a Key West bar in 1936 and follows them through the Spanish Civil War and the beginnings of World War II. I just wish director Philip Kaufman and screenwriters Jerry Stahl and Barbara Turner had stuck to their hyper-specific guns. Instead, the film lingers on conflicts in Spain and China for far too long. (The depiction of Hemingway’s late-life demons also feels a little tacked on.)

“We were good in war. And when there was no war, we made our own.”

Hemingway & Gellhorn is at its sizzling best when the two writers spar verbally. Hemingway seems turned on by the fact that Gellhorn doesn’t shrink away from his legendary masculinity. The duo travel to Spain to capture the country’s Civil War — Gellhorn is an inexperienced correspondent, while Hemingway and a group of friends are making the anti-Fascist propaganda film The Spanish Earth — and eventually fall into each other’s arms. Their first love scene — as war rages outside and a building collapses around them — went from sexy to silly. It also set the tone for the rest of their romantic interludes, which felt more awkward than passionate and didn’t match the spark of their heated arguments. Although Hemingway & Gellhorn touches on intriguing subjects like Hemingway’s competitiveness, the gritty work of a war correspondent, and the notion that Hemingway “made” Gellhorn, Kaufman seems more concerned with visual tricks (more on that in the Video and Special Features section) and staging scenes like the one where the lovers hook up in a dressing room full of topless dancers.

Kaufman clearly got his hands on some great archival footage, but the director fell too much in love with inserting his actors into the past. The device is effective and makes sense when Hemingway and his team — which includes fellow writer John Dos Passos (David Strathairn) and director Joris Ivens (Lars Ulrich of Metallica…wait, what?!) — are filming on the battlefield, but feels forced the more it’s used to transition between scenes. The story also sticks with the Spanish Civil War for way too much of the film’s 155-minute running time. Good actors like Tony Shalhoub (as a Russian liaison in Spain), Rodrigo Santoro (as a charismatic Spanish revolutionary), Santiago Cabrera (quite good as war photographer Robert Capa) and Strathairn (as a more sensitive contemporary of Hemingway’s) are effective in the film’s first half, but ultimately disposable in the grand scheme of the story. Molly Parker and Parker Posey play the Hemingway wives who came before and after Gellhorn, respectively. (Parker was the only one who got a bit of meat to chew on with her role.) Robert Duvall also pops up in a cameo as a crazy Russian general who made me wonder if Russians who play Russian roulette simply call it “roulette.”

The star of the show is clearly Kidman, who I’m almost certain filled out Gellhorn’s pants better than the writer ever did. (Watch the bar scene where Hemingway and Gellhorn first meet if you don’t believe me.) The actress is wonderful as the strong-willed Gellhorn grows from an insecure war correspondent to Hemingway’s muse and eventually his equal. Even Kidman’s work as an elderly Gellhorn gives a TV interview — when she lowers her voice an octave or two — is amazing. Owen had more baggage attached to his performance because more people are familiar with Hemingway’s persona than Gellhorn’s. The actor channels the same animalistic force he brought to his Oscar-nominated turn in Closer while intermittently capturing the larger-then-life, “men want to be him/women want him” charisma Hemingway possessed. There is, naturally, some inevitable scenery chewing Owen’s performance.

Again, the film merely brushes up against the idea that Hemingway may have been overcompensating for something with his over-the-top bravado. Since Gellhorn is the one narrating the story, it’s not surprising to see she comes off as the more sympathetic party. (No mention is made of Gellhorn’s own real-life infidelity.) It brought to mind something Hemingway tells Gellhorn in the film: “let me tell you something else about writers; the best ones are all liars.”

Hemingway & Gellhorn is presented in an aspect ratio of 1.78:1. The 1080p image is arrived at with an AVC MPEG-4 codec at an average of 28 mbps. There’s a ton more going on here than what we’re used to seeing from relatively straightforward historical romances. In addition to constantly incorporating actors into archival footage, the color palette is constantly and subtly shifting to go along with the film’s different settings and time periods. The good news is the film absolutely sticks the landing in terms of color and contrast. Whether it’s shooting for a terracotta shade inSpain or a blue-ish hue in Finald, the image always does exactly what is intended. The less-good news is the integration of actors into archival footage doesn’t always work. At times, it’s pretty obvious Kidman, Owen and Co. are walking around in front of a green screen. Fortunately, all the scratches and dirt from the newsreel-type footage is still there.

The 1930s/40s period of the film serves as the baseline for the high definition image, which is warm and pleasing. Close-ups are strong, though not exactly razor sharp. Black levels are impressive. There’s a lot of heavy lifting to do here, and the Blu-ray manages it quite well.

The DTS-HD Master Audio 5.1 track is probably the best part of this disc. The film was nominated for 15 Emmys, and won two: one for Javier Navarrete’s rousing score and another for its sound editing. Both deserving winners are on full display here. Navarette’s score emanates strongly from all speakers. Meanwhile, the full-bodied track brings the war(s) into your living room in a way usually reserved for action movies. The subs do an excellent job of pounding out the rumble of tanks and the bombings in Spain that made entire buildings shake. A lot of the same intensity is also applied to the title characters’ domestic scraps. Dialogue also comes through extremely well. In all, this is a well-mixed, forceful track that fits its subjects perfectly.

Behind the Visual Effects: (5:29) On the surface, you wouldn’t think of Hemingway & Gellhorn as a visual effects extravaganza. However, this featurette is totally justified given director Philip Kaufman’s (over)use of archival footage highlighting places Hemingway and Gellhorn visited in real life. Visual effects supervisor Chris Morley excitedly talks about working his movie magic on a less fantastical setting; I just wish I agreed with everybody when they said the effect was seamless. I was honestly more impressed that the film — which is set in Spain, Cuba, China, Finland and the United States — was filmed entirely in San Francisco.

Making Hemingway & Gellhorn: (6:27) Kidman talks about being attracted to stories about women who are trailblazers. Meanwhile, Kaufman notes his attraction to using and inhabiting archival footage dates back to The Right Stuff and The Unbearable Lightness of Being, and astutely points out that no one would make Casablanca today because epic, adult love stories seem to be going out of style at the multiplex. (It’s such a good point, I don’t really mind that he just obliquely compared Hemingway & Gellhorn to Casablanca.)

(Available on the Blu-ray and DVD.)

Audio Commentary with director Philip Kaufman and editor Walter Murch: I generally enjoy listening to commentaries between directors and editors, and this one is no exception. Kaufman and Murch (Apocalypse Now) aren’t exactly a barrel of laughs, but hearing them talk about the technical aspects of the production, along with the film’s themes and imagery, is like listening to a pair of professors who really know their stuff.

Hemingway & Gellhorn is a well-acted, impeccably-produced misfire. The Blu-ray enhances the excellent production values and the performances make it exceedingly watchable, but the film remains overlong and unfocused.