Posted in: No Huddle by Brent Lorentson on April 2nd, 2013 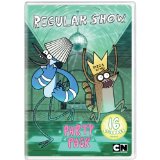 Just how much appeal can a show have when it’s about two directionless twenty-something’s who are groundskeepers at a local park; oh yeah, and they happen to be a raccoon and a blue jay?  It came as more than a little surprise how much this show not only had me laughing but I’m certain will have heavy replay value in this household. For those that believe it’s simply a kids’ show, be warned. Though it may not be filled with the raunch one would expect from Family Guy, Regular Show does dip its paw into indecency but never seems to cross the line.

For some cartoons and many shows in general, targeting a younger demographic each episode seems to attempt to deliver a message of some sort.  I don’t know if this is out of obligation to the younger viewers, but often enough the message seems to be forced and the show suffers in return.  Where I tip my hat to Regular Show is that it manages to deliver a message in a way where the viewer may not even realize what life lesson may be handed to them.  In Stick Hockey, Mordecai and Rigby find a used stick hockey game and the two become obsessed with the game, believing it to be the greatest game to ever cross their path.  Their boss threatens to take it from them unless they finish their work, but when the boss goes back on his word and gets rid of the stick hockey game, Mordecai and Rigby go through the motions of hunting the game down and wind up finding more trouble than they could have hoped for.

Having to pick a favorite episode is hard for me; the DVD is filled with 16 episodes, and after checking out the show on IMDB it seems this is not quite a full season but is a good introduction for new viewers.  The best example of the show’s absurdity would be in Out of Commission when Rigby and Mordecai are given the responsibility to dispose of the park’s old golf cart. On the way to the dump the car comes to life.  Since the cart knows his end is coming, he asks Rigby and Mordecai to send him off properly where he enjoys everything from a final sunset to getting into a bar fight.  It’s this kind of nonsensical humor that will make or break the show for you, for the stick-in-the-muds that can’t enjoy some absurd humor, shuffle along and enjoy the boring and mundane.

The other positive I see with the show is for those parents looking for something to watch with their kids who may not be quite old enough for Family Guy or South Park, this may be the show you’re looking for.  The animation for the show may not be up to par with the animation I grew up with in the 80s, but the imagery is more than adequate.  For those who did grow up in the 80s, I’m sure Regular Show will hit you with a bit of nostalgia, especially with the musical choices like New Kids on the Block as well as a Breakfast Club homage and numerous other pop culture references.

In short, Regular Show is anything but regular and stands out from the pack with its clever insights and outsider take on day-to-day life in the workplace.  Don’t let the Cartoon Network label fool you and believe this is entertainment for toddlers. This is quality writing that just about the whole family can enjoy; personally I’m already looking forward to re-watching a few of these episodes with the girlfriend; there’s no shame in admitting you like cartoons even if you are in your 30s or older.

Brent Lorentson is a horror writer and film critic based out of Tampa, Florida. With a BA in Digital Film, he co-wrote and co-directed Scavenger Hunt. His short stories have appeared in various horror anthologies. In 2019 his short script Fertile Blood will be a part of the anthology horror film Slumber Party. He is currently working on his first novel A Dark and Secret Place set to be released in late 2019. Favorite Films: Taxi Driver, Fight Club, I Saw the Devil, The Wild Bunch, Dawn of the Dead, A Clockwork Orange, Pulp Fiction, Heathers, The Monster Squad, and High Fidelity.
Mystery Science Theater 3000: XXVI Tom Green: Live