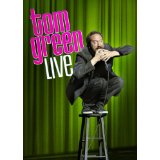 It is truly amazing the career that Tom Green has had when you really sit back and think about it. Tom has made a career as an oddball whose antics would either make you laugh hysterically or raise a brow with suspicion of his mental state. His personality has taken him to many heights, from a Canadian Public Access show to MTV, MTV to the silver screen, but it wasn’t until he got in front of the camera and documented his battle with testicular cancer that many people would stand up and take notice of Hollywood’s strangest man. Speaking of stand-up, it appears that after tackling television, film, and rapping (seriously!), Tom is turning towards stand-up for his first comedy special Tom Green Live.

Before this DVD found its way to me, it had been years since I heard the name Tom Green. To this day I can’t think of him without imagining some of his crazy antics, like the scene from Road Trip where he put a live mouse in his mouth, or practically any scene from Freddie Got Fingered (a film that to this day remains the most surreal experience I ever had watching a movie). However, as I watched him enter from the crowd and take the stage, I immediately felt a change. If this had been years ago, perhaps around the time of Freddie Got Fingered, I would have been entertained, but sadly I’ve matured since then, and it appears so has Tom.

From the very beginning of his routine, I felt that it lacked the exuberant flare that made him famous. It was a Tom Green I had never seen before; there were moments during the 55-minute special where the old Tom makes a brief appearance, such as him in a squatting position on top of a stool with his eyes popping out (a sight that would later become the front of the DVD cover art), but for the most part the entire act was tame. He managed to keep it current, talking about topics like the dangers that Facebook poses married people and how today’s technology differs from when he was growing up, as well as devoting time to reference shows like 16 and Pregnant and The Jersey Shore, but the jokes that were coupled with those topics only brought out a mild chuckle rather than a side-splitting laugh. Overall the entire set was too sporadic, and not enough time was devoted to any subject for it to have the desired effect; by the time the topic had registered in your mind, he was moving on to the next one.

I have great respect for everything that Tom Green has been able to accomplish; his television and web series, raising awareness for testicular cancer, and most importantly his brief but very notable marriage to Drew Barrymore. Tom is proof that you can be odd and little different and still make it in Hollywood, but this special shouldn’t been done at the height of his career. Times have changed, and being an odd ball just isn’t enough anymore.

Jeremy Butler is a film school graduate of the International Academy of Design and Technology. He is been writing for Upcomingdiscs since 2012; however, movies have played a big part of his life for much longer. Favorite genres include horror, science fiction/fantasy, and comedy. Favorite movies are V for Vendetta, Boondocks Saints, Kiss Kiss Bang Bang, and The Godfather.
Regular Show: Party Pack 3 The Devil’s in the Details (Blu-ray)