Posted in: The Reel World by Brent Lorentson on April 19th, 2013 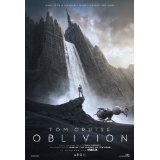 Ever wonder what would happen if you took all the best or most memorable parts in a sci-fi film and cut them all together?  What you get is the hodgepodge mess that is Oblivion, which unless I’m mistaken or blinked a bit too long and missed it, doesn’t have an original bone in its already weak story.  Though they say if you’re going to steal, then steal from the best; the problem is that when you play it off as your own, please be able to give us a refreshing twist on a classic scene, not just make it cool.  Sure people will say the same about Tarantino, but he owns up to it and puts a spin on it that is undeniably his own.  In the case for Joseph Kosinski (the writer and director) I look at Oblivion and feel he gave the entire sci-fi genre the finger and took all the cool great moments to play with at will.

(If you’ve never seen The Matrix, Moon, Blade Runner, Independence Day, 2001 Space Odyssey or numerous others, well, then perhaps you may be in the dark as to what I’m talking about.)

Jack (Cruise) is one of the last survivors of the Great War after we were under attack by an alien race and forced to use our nukes in order to survive.  Jack’s job on earth is basically to help find and recover the last of the usable resources on the planet and report them to home base, which is conveniently located just beyond our atmosphere.  The reality of his job is that Jack babysits and repairs drones that are patrolling and protecting hydro rigs from left over aliens known as Scavs.  All this is given in a lengthy sequence with Jack flying around what remains of New York.  Had it not been for the stunning effects throughout this film I think this film could have been a total bust, but thankfully the visuals do all they can to save this picture.

Back home (a few hundred yards in the sky), Jacks wife Victoria (Andrea Riseborough) also is his partner taking orders from home base on what operations they are to perform.  Since their memories have been wiped, Jack and Victoria can do nothing but listen to and obey orders from home base, because after all, who would take advantage of someone who’s had their memory wiped?  The problem is, Jack happens to remember things, like how Earth used to be before the Great War.  But how can that be, considering it was so many years ago, and Jack doesn’t seem to have aged from his memories?  This question bothered me from the beginning, and as the truth starts to unravel it was a mixture of groans, smacking my head, and having my thoughts distracted by the pretty images up on the IMAX screen.

What I enjoyed most about the film were the moments where Jack gets to escape to his little hideaway, an area that seems to be untouched from the war.  There are tall beautiful trees and a cabin built along the shore of a lake; compared to where he’s staying in the sky, this places seems a lot closer to home.  Apparently Jack seems to feel the same way and has collected numerous trinkets from his travels and stashed them in the cabin, along with an old record player that somehow still works.

Things take a turn when Jack witnesses a craft crashing, and when he goes to investigate he sees that there are human survivors.  Unfortunately the drones also pick up on this crash and view the fallen humans as threats, and they begin to exterminate them one by one.  Somehow, though, Jack is able to convince/scare off a drone and save one remaining survivor.  This isn’t just some random survivor, we quickly find out after she wakes long enough to say Jack’s name.

To the film’s credit I found I enjoyed the start of the film much more than the later half.  There are some cool seeds planted that give you hope that this film will be all kinds of badass like the trailer promises, but in the end we simply get more of the same.  Seriously, did we really need robots turning on man; I mean, do they believe we already forgot about The Matrix films, Terminator, Alien, Blade Runner, etc?  The coolest aspect of the film I don’t plan on spoiling, but it’s the one aspect I wish they went further into and had more fun with.

I’ve already mentioned how good the special effects are, but to be more specific, it’s the flight of not just the ship Jack flies around in but the drones as well.  On the giant screen I was convinced these drones and ships existed beyond the space of a computer and were in our real world.  There is a fun moment where we see Jack in pursuit of some drones, and it’s hard not to think that just for a moment he’s Maverick only a 100 years in the future.  For me this was a high point, since that’s about as close to a Top Gun sequel as we’ll ever get (though I hope I’m wrong).

In the end the film was simply okay but simply didn’t live up to its potential.  For those hoping this would be the science fiction epic of the decade, sorry, but that is so not the case. With a budget of over 120 million on one side I can say at least I can say you can see every penny spent up on the screen, the other side is it left me wanting so much more. But thankfully in August we’ll see the release of Elysium, which gives this sci-fi geek a little hope.  Oh, and there’s this independent film people should be on the lookout for, not sure if it’ll have a wide release, Star Tracks, I think?  Well, whatever that little movie is called, if it shows up in your town, it’s one to look out for; I hear it’s from the creator of Felicity?

Brent Lorentson is a horror writer and film critic based out of Tampa, Florida. With a BA in Digital Film, he co-wrote and co-directed Scavenger Hunt. His short stories have appeared in various horror anthologies. In 2019 his short script Fertile Blood will be a part of the anthology horror film Slumber Party. He is currently working on his first novel A Dark and Secret Place set to be released in late 2019. Favorite Films: Taxi Driver, Fight Club, I Saw the Devil, The Wild Bunch, Dawn of the Dead, A Clockwork Orange, Pulp Fiction, Heathers, The Monster Squad, and High Fidelity.
Magic Journey to Africa (Blu-ray 3D) Pawn (Blu-ray)