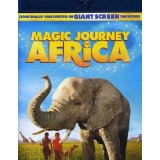 “I want to visit a country of dreams, imagination and magic.”

Instead of “dreams, imagination and magic”, the Africa presented in this confounding, family-friendly offering from Spanish filmmaker Jordi Llompart is a place of trippy visuals, head-scratching dialogue and horrid CGI. Magic Journey to Africa — billed as a “giant screen spectacle” — is now available for home consumption, where the film’s dazzling 3D presentation is its only saving grace.

The 49-minute movie — originally released in Europe in 2010 — was probably intended for kids who expect to see something (anything!) on an IMAX screen during museum field trips. It’s the story of Jana (Eva Gerretsen), a young girl living in Barcelona who forges a deep, inexplicable bond with an African orphan boy named Kabbo (Michael Van Wyk) after she spots him stealing from a customer in a restaurant. She senses sadness in the boy’s life and eventually tracks him down to a hospital after he falls ill. (Don’t bother asking how Jana and her family found Kabbo because the film doesn’t bother explaining.) Kabbo is gone from the hospital before Jana can see him a second time, so she sets off on an adventure to find him in his homeland, a place of magical trees, fire spirits and poorly-rendered talking animals. (Also, don’t bother asking why Jana is so obsessed with a young boy she only met once — apparently, this girl has absolutely nothing else going on in her life — because the film doesn’t bother explaining.)

These narrative shortcuts would be forgivable — especially when you’re trying to tell a story in less than an hour — if it weren’t for the movie’s biggest mistake. Once the action shifts to Africa at around the 15-minute mark, the expectation is that Magic Journey to Africa would turn into a dazzling showcase for the continent’s splendor and natural beauty. This would be particularly useful for any viewer — young or old — who has never traveled to Africa. (As far as I can find, this film’s release was limited to Europe and South Korea.)

Instead, the movie becomes more of a whacked out Alice in Wonderland story that just happens to be set in Africa. As Jana searches for Kabbo with help from a local boy named Mel (Raymond Mvula) and her flying horse(?!), she comes across an arrogant caracal, a forlorn lion and a mysterious figure known as the Guardian of Stories. Each of these encounters has the characters spouting repetitive platitudes about imagination and spirituality that sound deep, but are mostly nonsense.

I don’t get too much pleasure from criticizing little kids, so I’ll mostly lay off the painful performances from the inexperienced cast. If anything, the (talking) lion’s share of the blame goes to Llompart for placing too much of the storytelling burden on Gerretsen’s young shoulders and on subpar CGI. The filmmaker — who wrote, produced and directed Magic Journey to Africa — does deserve credit for conjuring some gorgeous three-dimensional visuals on a relatively tight budget that obviously didn’t leave much for the visual effects department.

Young children may rally behind a spunky protagonist like Jana, but the movie is too confusing to be educational, as well as too amateurish and juvenile for most adults. (Stoners, on the other hand, might get a kick out of a few sequences.)

Magic Journey to Africa is presented in an aspect of 1.78:1. The 1080p 3D image is arrived at with an MVC dual codec at an average of 22/10 mbps. Since the 3D and 2D versions of the film were contained on the same disc, I kept an eye out for any compression issues. If any exist, they’re not present in the stunning 3D version from Image Entertainment. (The 2D presentation is solid, if ultimately inferior.) Although there are a few gimmicky effects of stuff flying toward the screen — including a “magic light of inspiration” — the added dimension is mostly used to convey a strong sense of depth in the exotic environments. An impressive early shot simultaneously gives us a sunset on the horizon and blades of grass blowing in the foreground. There is a good amount of versatility on display in scenes that take us from the stars in space to arid landscapes. Colors in the Dark Continent explode vibrantly when they’re called to do so. The main drawback comes whenever the film’s razor sharp presentation makes the substandard visual effects stand out like a sore thumb. Still, I don’t think the Blu-ray should totally be at fault for shining a light on shoddy CGI.

The DTS-HD Master Audio 5.1 track is immersive without being overly aggressive. If anything, the track — particularly the rear channels — may have benefited from a bit more atmospheric noises and a bit less of the jaunty, inspirational score by David Giro and songs that sound like they’re being performed by the poor man’s Jack Johnson. Subs are used to really good effect whenever an animal is running or (surprisingly) during the scene with the fire spirit. There is also a dynamic sense of directionality. Sound travels to the appropriate speaker when necessary, including an opening credits gallop from a mystical animal. Synchronization on the talking animals is way off at times, but I suspect that’s due to English not necessarily being their first language. (There are also French and Spanish DTS-HD Master Audio 5.1 tracks.) Dialogue comes through clearly, though I wish we had at least been given the option of subtitles.

“Making of” Documentaries: (41:08) Each of these two docs include on-the-set footage and brief comments from the cast and crew during production in Namibia (27:01) and South Africa (14:07). Crew members talk about the challenge of working with children and animals in extreme conditions. (It probably explains why they resorted to so much CGI; they couldn’t get the animals to behave properly.) The most baffling thing about these docs is that they showcase more of Africa’s uniquely beautiful landscape and wildlife than the feature film.

Almost everything about Magic Journey to Africa is unnecessarily confusing, including the fact that the Blu-ray packaging neglects to mention the film is offered in 3D. (This is a pleasant surprise only if you have the appropriate TV.)

I really like the idea that 3D filmmaking isn’t confined to James Cameron blockbusters, cheap-o slasher flicks or Disney movies, and that small-scale productions like this one can use the extra dimension effectively. Unfortunately, there isn’t anything else to recommend in Magic Journey to Africa. Skip this trip and turn on Nat Geo instead.