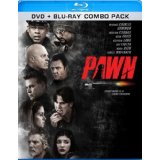 To be honest, I’m not much of a chess player. I know how all the pieces move and I enjoy the mental challenge, but I never really committed to becoming proficient at the game. (Now, if we’re talking Connect Four, you don’t want to run into me in a dark alley.) Pawn establishes its intriguing chess motif early on, before almost completely abandoning it in favor of becoming more of a generically twisty thriller.

The film opens with a fantastic scene. Police officer Will (Forest Whitaker) walks into the Be Brite Diner, where he’s got a regular chess game going with hobbled employee Charlie (Stephen Lang), just before midnight and can immediately tell — along with the audience — that something’s not quite right. Turns out the place is being robbed by a trio of thugs led by Derrick (Michael Chiklis). The opening scene wraps up with a tense action sequence showing what would happen if Charlie and Will fought back against their attackers. I loved it because it mirrored the way chess players have to think four or five steps ahead of their opponent.

From there, Pawn shows us both the aftermath of the bloody robbery — represented by the mysterious “Man in the Suit” (Ray Liotta) interrogating a wounded survivor at his hospital bed — and flashes back to the events that led to the major players being present at the diner. Those players include Nick Davenport (Sean Faris), the world’s unluckiest parolee. Nick, a former car thief, had been released from prison just hours before getting caught up in the diner heist. Nick’s small-time criminal background makes him the perfect pawn for both Derrick and the crooked Lt. Barnes (Marton Csokas), who is especially invested in the robbery’s outcome.

First-time director David A. Armstrong — making an assured debut — and writer Jay Anthony White have made a structurally ambitious film that ends up having too many pieces on its chessboard. We eventually learn the diner is owned by a local mobster who is keeping something very valuable/dangerous in his safe. (Okay.) There’s also a secret FBI informant thrown into the mix. (Pushing it.) On top of Nick’s life being in danger, he’s got a pregnant wife (Nikki Reed) who is eventually imperiled. (Too much.) By the time Common showed up as hostage negotiator Jeff Porter — seemingly the only clean cop on the force — I instinctively expected some huge twist involving his character. (Jeff Porter is actually white!) I don’t mind being kept on my toes and having to watch every character like a hawk, but Pawn took the notion of “no one is who they appear to be” to absurd levels.

Thankfully, the talented cast seemed to be inspired by the time-jumping script that allowed them to bring different shades to their characters. (The film revisits the opening diner scene, which plays out somewhat differently in viewers’ eyes now that we know more of what’s going on.) Faris is decent as the overwhelmed protagonist — notice that Nick is not a violent criminal, making it easier for us to root for him — gaining steam as the movie goes along. Chiklis busts out a jarring British accent and is appropriately brutish as the robbery’s ringleader. (Plus, seeing him and Forest Whitaker in the same movie was a mini-treat for us Shield fans.) I also liked seeing Lang (the muscular colonel in Avatar) play a frail character, while Ray Liotta can probably menace people in his sleep at this point.

In the end, I enjoyed the film more when it was a Rashomon-style caper that explored each of the main players’ perspectives, and before it morphed into a poor man’s Dog Day Afternoon with questionable leaps of logic. In other words, Pawn began as a stimulating game of chess before settling in and becoming an adequate game of checkers.

Pawn is presented in an aspect ratio of 2.40:1. The 1080p image is arrived at with an AVC MPEG-4 codec at an average of 25 mbps. Except for the flashback of Nick being released from prison (and running into a notable character), the entire film takes place at night and/or indoors. So if you’re searching for vibrant colors, look elsewhere. Fortunately, this Anchor Bay Blu-ray gives us a downbeat image that is sharp — digital noise is virtually undetectable — and its black levels are on-point. (Shadows come through particularly well.) Certainly not the flashiest disc anyone will ever see, but it works quite well for this film.

The Dolby TrueHD 5.1 track is as bluntly effective as the film’s visual presentation. Subs pound to life whenever a violent sound effect needs to be punctuated, and the entire track kicks in forcefully during the action sequences. Rears are relatively quiet throughout — though there’s a cool moment where they nicely convey how a character hiding in a bathroom can hear someone speaking in another room — and the dialogue comes through crisply. It’s not the most loaded track in the world, but the stuff we do hear is balanced and well-mixed.

Pawn: Behind the Scenes: (23:09) Cast and crew discuss the film — which was shot in 15 days — and why they were attracted to the project. (Producer Jeff Most liked Pawn because it reminded him of the aforementioned Dog Day Afternoon, while the actors were understandably attracted to the script’s intricacies.) Notably absent is Chiklis, who also served as a producer on the film. Presented in HD.

I’ll cool it with the groan-inducing chess analogies for this section: Pawn is a solid, entertaining thriller that starts off stronger than it ends. Give it a look if you’re in the mood for a decent crime caper, or if you ever wondered what Michael Chiklis sounds like with a British accent.