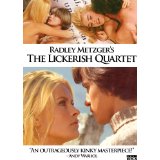 You need to imagine you are back in 1969. Many of you will have no idea what a different world it was back then. So many things did not exist, like computers and the internet and cable television. So much is available now that people could only fantasize about then. Now any unsupervised 10-year-old can see just about anything they want. It’s hard to imagine how big a difference that is. Hiding Playboy magazines under the mattress was about as bad as it got back then. There was a huge unfulfilled demand for adult entertainment when adults couldn’t find much that excited or titillated them. But there was a change coming slowly without calling too much attention to itself. Radley Metzger saw an opportunity to create a kind of art film that would let him break new ground.

The film The Lickerish Quartet was one of a number of films Metzger created as a film distributor and director. The films look quaint now. They were filmed beautifully with excellent production values. For instance, The Lickerish Quartet makes superb use of an actual castle (Balsorano in Italy’s Abruzzi Mountains) by the gorgeous seaside and countryside. It attempts to use Pirandello’s Six Characters in Search of an Author as an inspiration for its existential musings. Metzger’s forays are pretentious, but they did break ground in upscale eroticism. Both Andy Warhol and NY Times film critic Vincent Canby gave it high praise.

Metzger had a varied career making films of all kinds. His first film called Dark Odyssey (1958), about the impressions of a Greek immigrant as he assimilates in New York City, was well received. Soon he found his niche as a pioneer in sexploitation films. Many of them were literary adaptations such as Camille 2000 (1969), Carmen, Baby (1967), Therese and Isabelle (1968), and The Cat and the Canary (1979). Eventually he began using the pseudonym of Henry Paris to start making historically groundbreaking films like The Opening of Misty Beethoven. He was straddling two worlds but clearly becoming more comfortable making adult films.

The Lickerish Quartet starts with an aristocrat obsessed with crude silent 16 mm films that he screens for his wife and son. Later that day they visit a stunt circus where a motorcycle team defies gravity circling in a tube off the ground. The sequence, like many in the film, is visually impressive. It’s the dialog that frequently bogs down in pretentiousness. At this event they see a woman who they believe to be one of the women in the stag film. They convince the woman to join them at the castle, and the rest of the film becomes a mind game with the audience with attempts to portray shifting realities. By the end of the film the surreal direction has been made clear, but when you compare it to the works around the same time period of a master filmmaker like Luis Bunel it is left wanting. Bunel was a genius of surrealism, while Metzger is merely a game craftsman.

This restored DVD has many extras including commentary with the director and film historian Michael Bowen. It has two behind the scenes featurettes and a “cool” version of love scenes for certain territories that weren’t ready for anything too hot.

The main appeal is seeing a film at a turning point in our history that attempts to be on the cutting edge and trying to find where that edge is. In the subsequent years boundaries and barriers were torn down, and there was very little that wasn’t taboo. Cutting-edge films turned ugly. In the case of The Lickerish Quartet, the cutting edge was beautiful.