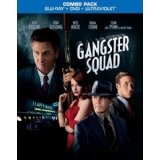 “I want to talk to you about the war for the soul of Los Angeles.”

This could easily describe the current rivalry between the surging L.A. Clippers and the geriatric Los Angeles Lakers, but Gangster Squad has slightly weightier matters on its mind. The stylish 1940s and 50s cops-and-crooks saga wants to tell a story about corruption and violent men unable — or unwilling — to turn off their capacity for hurting others. Instead, the film winds up being a somewhat shallow 21st century gloss on The Untouchables. And there’s absolutely nothing wrong with that.

The film was scheduled for a Sept. 7 release when real-life tragedy intervened. The Aurora, Colo. shootings at a screening for The Dark Knight Rises were too reminiscent of a standout scene from the great Gangster Squad trailer that featured a group of mobsters opening fire from behind a movie theater screen. Removing the scene from all subsequent trailers wasn’t enough. Director Ruben Fleischer (Zombieland) and screenwriter Will Beall set about reworking the pivotal sequence and convened the cast in August for reshoots at L.A.’s Chinatown. (For what it’s worth, the changes are completely seamless; a fellow critic and I struggled to identify the new material.)

Gangster Squad is based on Paul Lieberman’s book of the same name, which tells the true life story of the secret LAPD unit that waged an all-out war on psychotic gangster Mickey Cohen (Sean Penn). The unit is led by Sgt. John O’Mara (Josh Brolin), who is handpicked for the hush-hush task by Chief Bill Parker (Nick Nolte at his most gravelly). Since Cohen has most of the police department in his back pocket, O’Mara is forced to think outside the box. With input from his concerned, supportive wife (Mireille Enos of The Killing) — who definitely would’ve been a complete wet blanket in a lesser movie — O’Mara selects his ragtag team. The Gangster Squad includes knife-wielding Coleman Harris (Anthony Mackie), good-hearted techie — before “techies” were a thing — Conway Keeler (Giovanni Ribisi), legendary gunslinger Max Kennard (Robert Patrick) and his rookie companion Navidad Ramirez (Michael Peña).

Fleischer pulls off a similar trick here as he did with Zombieland, his surprise 2009 hit feature film debut. The director once again has a blast reworking a classic genre — in this case, the pulpy period piece — while displaying a good amount of affection and reverence for the material. He’s not looking to completely re-invent the gangster film; he just wants you to love it as much as he does. To that end, the director adds stylistic flourishes to his violence that fall just shy of being anachronistic. (Though for all the showy instances of gunplay, the film’s climax involves a pounding, relatively straightforward fistfight.) Let’s just say the movie earns its R rating within the first two minutes.

Brolin is appropriately square — and square-jawed — as the team’s solid, incorruptible leader. If someone ever wanted to make another Dick Tracy movie, they could do a lot worse then casting Brolin. Speaking of Dick Tracy, Penn (in my mind, out to get Brolin for what happened in Milk) wears waxy makeup that puts him two steps away from looking like a villain from the comic strip. Fortunately, Penn has a blast, and his scary, animalistic performance is the film’s highlight. Gosling successfully melds smoothness with practiced detachment until his character actually starts to give a crap about other people.

The movie benefits from a deep bench of likeable, reliable supporting players — Peña, Patrick and Ribisi are particularly good — but I have to say the one misfire is Stone. Don’t get me wrong, I still think she’s fantastic, and I admire her refusal to play roles that are strictly eye candy, but she’s just not womanly enough to be totally convincing as a femme fatale. When Grace seduces Jerry in a bar, she mostly comes off as a young girl playing dress-up.

In fact, for the first act of Gangster Squad it seemed to me like the actors were overdoing it with the tough-guy talk, and the film felt more like a straight-faced spoof of gangster movies than a serious drama. The movie seeks to explore the blurry line between the Gangster Squad and Cohen’s goons — as well as the tough time some WWII veterans had adjusting to life back home — but it doesn’t go too far beyond the surface.

Gangster Squad is presented in its original aspect ratio of 2.40:1. The 1080p image is arrived at with an AVC MPEG-4 codec at an average 25 mbps. The high-definition image presentation is better than its bit rate would imply. Black levels dominate the presentation with quite wonderful inky blacks and superb shadow definition. Most of these important scenes transpire in the darkness with dark cars and dark-dressed characters. You’ll have no trouble distinguishing between these layers of blackness. Add to the mix fine texture that brings the period piece alive with a carefully crafted production design. It’s evident in everything from the early L.A. streets to the authentic costumes and props. The film is just as good when the lights are bright, particularly the bright and colorful neon lights of Slapsy’s.

The DTS-HD Master Audio 5.1 is pretty aggressive. It’s what you should expect with plenty of Tommy guns being fired between the good and bad guys. The quiet moments are just as effective. Penn’s rather clichéd dialog comes through perfectly, as does all of the film’s dialog. The score never intrudes but only helps with the immersive experience. Subs come alive at just the right moments.

The Gangland Files: This is a picture in picture mode that gives you a ton of background on the production and the historical information.

Deleted Scenes: (12:20) There are 8 with a handy play-all. Some of this should have been retained. One scene explains why Mickey asks the guy he’s about to pull apart in the beginning if he’s impressed yet. Another puts Mickey’s “Here comes Santa Claus” battle cry into perspective. This is informative stuff.

Gangland Files – Focus Points: These short pieces provide short featurettes on various characters, sets, locations, production design and the historical perspective. There are 15 and average about 4 minutes each.

Rogue’s Gallery – Mickey Cohen: (46:44) This is an episode of the Rogue’s Gallery television show that features the real Mickey Cohen. It is filled with plenty of vintage footage and photographs. Much of it comes from Mickey’s own mouth or the pages of his autobiography. There is one serious complaint here. The show was originally full-frame, and it’s stretched here to fill out the screen. That means a distorted picture.

In addition to The Untouchables, the film nods to The Dirty Dozen, Ocean’s Eleven (when O’Mara sets about recruiting his team) and a number of other great movies where a scrappy group of guys team up to take on a seemingly impossible mission. Gangster Squad doesn’t quite reach that level. Although the violence in the film has taken on an unfortunate resonance due to real-life events, this movie deserves to be seen and remembered on its own merits.