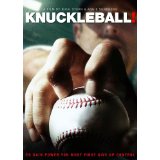 “Nobody grows up wanting to be a knuckleball pitcher. It’s born of desperation; it’s born of necessity.”

By the start of the 2011 season, there were only two active knuckleballers in Major League Baseball. One was a failed power-hitting 1B/3B, while the other had been cut by his team at the start of the previous year’s spring training. Knuckleball! — an engaging documentary dedicated to the kookiest pitch in baseball history — illustrates how that desperation extends beyond the few brave souls who have attempted to make a living in the big leagues by throwing very softly.

The film chronicles the 2011 seasons for Boston Red Sox mainstay Tim Wakefield and New York Mets pitcher R.A. Dickey. Wakefield — in what turned out to be the 45-year-old pitcher’s swan song — was trying to achieve a couple of personal milestones: 200 career wins and most wins by a Red Sox pitcher (192, held by a couple of guys you may have heard of: Roger Clemens and Cy Young). Dickey — armed with the first multi-year contract of his career — battled injuries, inconsistency and self-doubt throughout the year. (A split fingernail sounds like a joke to most professional athletes, but it’s a disaster for a knuckleballer.)

In addition to Wakefield and Dickey, the film also tracks down the other five living knuckleballers: Hall of Famer Phil Niekro, Jim Bouton, Tom Candiotti, Charlie Hough and Wilbur Wood. One of the most fascinating parts of the film is the unique connection these guys share. (Niekro and his late brother Joe mentored Wakefield when he was at a career crossroads; Hough did the same for Dickey.) I thoroughly enjoyed watching Wakefield, Dickey, Niekro and Hough get together for a game of golf and to share war stories about the most unpredictable pitch in baseball.

The group gleefully bonds over their delight in striking out the biggest, baddest hitters in the game with the slowest pitch they’ve ever seen. Directors Ricki Stern and Annie Sundberg (Joan Rivers: A Piece of Work) keep the film interesting by giving equal time to the pitch’s detractors.

On top of the steady stream of sportscasters and writers who believe it’s a gimmick, we also hear from dumbfounded managers and fellow players. Red Sox manager Terry Francona only turns to Wakefield during the 2011 season when some of his other starters get hurt, while the traumatized catchers who actually have to reel in the knuckler look like they need a support group. The film explains this skepticism away by positing that people — fans, talent evaluators — are accustomed to seeing top-notch speed and power from professional athletes. So slowing things down and letting a baseball flutter in the air runs counter to everything we’ve been conditioned to expect in team sports.

Both Wakefield and Dickey have compelling narratives. Wakefield is the blander personality of the two, but his pursuit of those two milestones kept his segments interesting. I preferred the look back at his long career — which Wakefield astutely compared to a knuckleball; “it moved up and down, with lots of twist and turns” — to the 2011 scenes. He went from a failed power hitter in the Pittsburgh Pirates farm system to a playoff pitching hero for the club; nobody remembers how great he was in the 2003 ALCS because of the one home run he gave up to Aaron “Bleeping” Boone. Dickey is the more thoughtful and sensitive of the film’s main subjects. Knuckleball! delves into a childhood that sowed the seeds of isolation — he compares being a knuckleballer on a baseball team to being an alien — and his tough road to success. With Wakefield’s retirement, Dickey is the last knuckleballer standing and he’s passionate about proving the legitimacy of the pitch.

The filmmakers bring a bit of flair to the proceedings with better-than-average game footage and an opening credits sequence highlighting the history of the pitch. (The exclamation point in the movie’s title, however, remains completely unnecessary.) I would’ve liked a bit more exploration into the pitch’s past and origins — fortunately, the bonus material/interviews are happy to oblige — because too much of the film felt like a requiem for Wakefield’s career. (Which was mildly nauseating for this Yankees fan.) The knuckleball’s future is considerably murkier.

The most interesting development may have actually happened off-screen. Dickey became the first knuckleballer to win a Cy Young award in 2012, seemingly bringing legitimacy to the specialty pitch. The only problem is the Mets declined to give him a big-money deal, and he signed with the Toronto Blue Jays last offseason. (Dickey may be in his late 30’s, but Wakefield and his peers have proven knuckleballers can remain effective well into their 40’s.) It’s clear Major League clubs still don’t believe in the knuckleball on a year-to-year basis. It’s hard to blame them, since the overriding theme of Knuckleball! is that the hurlers themselves don’t exactly know what the ball is going to do even on a game-to-game/pitch-by-pitch basis.