Posted in: Disc Reviews by Brent Lorentson on April 22nd, 2013 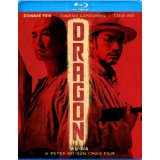 Donnie Yen continues to deliver one great martial arts film after the other, easily making him the most entertaining martial arts star for quite some time.  Sure, there are those who cling to the idea of Bruce Lee being “the best” or perhaps mentioning Jackie Chan or Jet Li for more modern viewers.  But for me it’s Yen, and I have no problem saying he may be the best martial arts star of all time.  His work with Ip Man, Seven Swords, and Flash Point are staples in a career that has been going since 1984.  With Dragon you can check off another hit for Yen; though it may not be as action-packed as some of his previous releases, what we get instead is a fun detective story that asks the question, can a man that has committed atrocious crimes be capable of change?

Dragon opens up in a small village in 1917 China.  The village is quaint; everyone has their place in keeping the village alive and running.  For money the village makes paper; it’s not enough to exactly have everyone living the high life, but that isn’t what you’d expect in this village that probably hasn’t changed much in the past hundred years.  But everything changes when two thieves come into the village and attempt to rob it.  Liu Jin-xi (Yen) reluctantly stops the robbery, and in the process a “fight” breaks out which results in the death of the two thieves.  Was it simply luck on Jin-xi’s part, or is his simpleminded act of heroism a ruse, and beneath it all could he possibly be a trained killer?  This is left to Xu Bai-jiu (Takeshi Kaneshiro Red Cliff and House of Flying Daggers), an investigator sent to the village to decide if it was all an act of self defense.

Before I get further into the plot, I should mention that the film was shot with the Phantom camera; what’s cool about this camera is that it’s able to shoot about 500 frames a second.  So why is that so cool?  Well, the fight scene mentioned above is in slow-mo, and we get to see a lot of detail in the fighting one doesn’t normally get to see.  In the bonus material they even go on to mention that when shooting at such a high frame rate for the fight sequences they actually have to make contact.  So when you see the closed fists make contact with the face that is contorting in crazy expressions, what you’re seeing is pseudo-real; that’s pretty cool, right?

As for how Bai-jiu goes about his investigations, it sort of reminded me of how Sherlock Holmes would choreograph a fight in the new Holmes films.  This is another instance where the Phantom shows off its ability to capture awesome imagery.  But there is also another element to Bai-jiu that allows him to stand out from your typical detective.  He practices a meditation with acupuncture that allows him to feel no empathy, which in theory should allow him to make judgment calls without emotion or guilt getting in the way.  Bai-jiu seems to read into every movement, and he begins to suspect that Jin-xi is more than he appears to be.

What he turns out to be is the son of a violent gang leader.  And once it is found out that the son has been found, well you just know things are not going to turn out so well for anyone involved.  When members from Jin-xi’s past first come to the village to search for him, we are treated to a rooftop chase that pays homage to Crouching Tiger Hidden Dragon; only one difference: this time there are no wires.  The first time I saw this I dug it and thought it was beautifully done wire work, but then on the special features they show that it was all the actors and no wires.  After I picked my jaw up and rewatched the scene, I just couldn’t help but appreciate the film that much more.

For the martial arts fans out there, let me say this is a must-see if for no better reason than to see Donny Yen fight Yu Wang (the original One-Armed Swordsman).  This sequence is worth the price of the film and is just the kind of martial arts bliss it should be.  But the fact that the rest of the movie holds up as well simply makes this a must-have for martial arts fans.

Dragon is presented with the aspect ratio of 2.35:1 from its original 2.39:1 format.  The 1080p image is arrived at with AVC MPEG-4 codec with an average of 24mbps.  A good portion of the film is shot in the daytime and allows enough detail to come through without any issues.  Being shot with the Phantom, which is just about as good as it gets in the HD digital world, we get plenty of beautiful imagery.  The director was smart to take advantage of the camera’s high frame rates and delivers some of the best fight choreography scene in some time.  As for the scenes shot at night and low light situations, there wasn’t as much separation as one would hope for a film that looks as good as this does throughout the rest of the film.

The DTS-HD Master Audio 5.1 for Dragon is in Mandarin, though you are given the option of English or Spanish subtitles.  For the most part this is a well-balanced track with the added details of flies and other village noises filling in the ambient space.  Where this can go from a soothing track with running water, thundering waterfalls along with the music, the bass kicks in a bit too much during some of the fight scenes where I felt the need to actually turn my player down.  With that exception it’s a fairly decent track.

The Making of Dragon: (22:27) This is broken up into small chapters covering various subjects.  These little glimpses though are so worth giving a look.  One chapter goes into the injuries the stuntmen and actors go through for the film, while another chapter delves into the use of the Phantom camera.  Though it’s only 22 minutes they manage to cram in a lot of cool info, not to mention the segment about involving the One Armed Swordsman.

Featurettes with Donnie Yen: (5:40) Here we get a brief moment with Donnie Yen discussing his process.  To describe much more would be to spoil some cool sequences in the climax.

This is a film that pays respect to the past and uses modern technology to tell an epic story which is not only filled with beautifully choreographed action scenes, but has a solid story connecting it all together.  The more time I put into thinking about this film the more I realize how much I loved it and look forward to sharing with others.

Brent Lorentson is a horror writer and film critic based out of Tampa, Florida. With a BA in Digital Film, he co-wrote and co-directed Scavenger Hunt. His short stories have appeared in various horror anthologies. In 2019 his short script Fertile Blood will be a part of the anthology horror film Slumber Party. He is currently working on his first novel A Dark and Secret Place set to be released in late 2019. Favorite Films: Taxi Driver, Fight Club, I Saw the Devil, The Wild Bunch, Dawn of the Dead, A Clockwork Orange, Pulp Fiction, Heathers, The Monster Squad, and High Fidelity.
Gangster Squad (Blu-ray) Knuckleball!