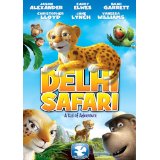 I wasn’t sure what I’d be getting into when picking up this Bollywood animated feature for kids.  Though it has an Americanized voice cast, the Bollywood culture is more than evident throughout this feature, not just through the cultural views but the many song and dance numbers peppered throughout.  As the film progressed, there was one thing that stuck with me from the beginning; this film has a message, and it’s not subtle about it, it hits the audience square in the jaw with it.

Somewhere deep in the heart of the jungle in India a young leopard cub Yuvi (Tara Strong) is playing with his father when suddenly they are being chased down by a large bulldozer.  The chase is relentless until the two leopards are surrounded, and in a move to save Yuvi the father ends up getting shot.  The animals of the jungle are devastated by the loss and the prospect of losing their home, so together they make a plan to seek out the help of the government to save the animals and their homes.  Problem is none of them know how to speak human, that is of course till they learn about a parrot, Alex (Tom Kenny) who has been captured and lives in a golden cage that can speak for them.

It’s once Alex is sprung from his cage and brought to the jungle that the adventure begins.  The long with Yuvi, his mother Begun (Vanessa Williams), Bagga (Brad Garrett) a loveable bear, and Bajrangi (Carlos Alazraqui) a mischievous monkey, all stick together on their journey to Delhi with adventure and musical numbers along the way.

Normally I’m not a fan of musical numbers in films; really, I can’t name but a handful of musicals I like period, but there is a sequence in this that was a bit catchy, and the animation wasn’t half bad.  It’s during a sequence when our group of weary travelers comes across a group of flamingos that warn them of the hyenas and what to look out for on their further travels.   The sequence manages to deliver a message and remain entertaining, and had the film been this subtle from start to finish I believe they could have had something special here, but instead the rest of the film simply goes through the motions of what you’d expect in a children’s adventure.

Delhi Safari is India’s first stereoscopic animated 3D film, and for their first time out it’s a step in the right direction.  They have a long way to go to be in the same league as Pixar or Dreamworks, but everyone has got to start somewhere.  The animation is a bit cartoonish still, but I doubt kids will have any trouble with the look of the film.

As for the parental warning, though this may get a family-approved label on it, parents try not to show this to kids that may be too young or overly sensitive to animal cruelty.  This has everything from a leopard being gunned down, a tiger recalling a tale of watching his pride (pack of tigers) being killed and butchered by humans, to even our heroes being stoned once reaching Delhi.  Now, this violence isn’t too graphic, but I’d have a hard time showing this to my GF’s five-year-old daughter.  The message in the film is one I support, but on an age-appropriate level.

Overall this is something worth checking out if you have a family of little ones and you happen to see this at your local Red Box or Netflix.  I wouldn’t dare put this in the caliber of Bambi or Finding Nemo, but this is the kind of film that I could see helping peak a child’s interest in wildlife, which is always a plus in my mind.

Brent Lorentson is a horror writer and film critic based out of Tampa, Florida. With a BA in Digital Film, he co-wrote and co-directed Scavenger Hunt. His short stories have appeared in various horror anthologies. In 2019 his short script Fertile Blood will be a part of the anthology horror film Slumber Party. He is currently working on his first novel A Dark and Secret Place set to be released in late 2019. Favorite Films: Taxi Driver, Fight Club, I Saw the Devil, The Wild Bunch, Dawn of the Dead, A Clockwork Orange, Pulp Fiction, Heathers, The Monster Squad, and High Fidelity.
Cheech & Chong’s Animated Movie! (Blu-ray) Inhumans