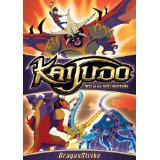 There has always been something about anime, as well as role playing card games like Pokémon and Kaijudo, that I’ve never quite been able to understand the draw towards them. When my friends talk about these games — with their booster packs and leveling up — all I can do is smile, nod my head, and pretend I have the slightest inkling at what they are talking about. Surely I can’t be alone on this. So when it came time to settle in and give Kaijudo: Rise of the Duel Masters a spin, I was reluctant; I hoped, perhaps, I could gain some insight into what some of my friends were talking about.

Before I go any further, I should mention the Dragon Strike DVD is only a five-episode arc and is not a reflection of the show or an entire season. The story arc, I’m guessing, takes place a while after the characters and the two worlds that exist have been established. So it did take me some time to just figure out what was even going on. But with that in mind, I wanted more by the time I was through the third episode.

Ray is not your average teenage boy. He has a gift that allows him to live in our world, as well as another world filled with amazing creatures that are trying to cross over into our universe. What protects us from this creature world is what they call a Vail, which allows those to cross from one side to the other when it’s open. Ray’s gifts don’t simply stop with crossing over to other worlds; he can also control a creature of his own, a large bull-like beast named Tatsurion The Unchained. Ray has two friends, Gabe and Allie, who have creatures of their own to summon whenever the gang finds itself in a tight spot in the heat of battle.

The big bad for the Duel Masters is a man they call The Choten who, of course, is power hungry and wants to find a way to control both universes. In order to pull this off, Choten needs to collect five artifacts from the five civilizations in the creature world. The battles to protect the artifacts are more entertaining than I had anticipated. (Dragons with rockets? Well, that was a pretty cool thing to see.) And it’s the battles that the kids are tuning in to see. Whether it’s a robot battle in a gladiator arena or seeing the humans up against their creatures, each episode delivers a fight filled with excitement and destruction. One can’t help but think about Godzilla, Mothra, Rodan, or any of the numerous Toho monsters of the past.

What surprised me most was how well done some of the animation is here. No, it’s nothing to marvel over, but it’s much more impressive than most of the other animation I’ve been seeing on the small screen lately. Overall, Dragon Strike was a nice taste to pique my interest in Kaijudo: Rise of the Duel Masters. I’d like to see what they do with these characters and their creatures because I have a good feeling about this show, and that it is something I could see myself getting behind. As for the booster packs and leveling up, I’m still just as mystified as I was before.

Brent Lorentson is a horror writer and film critic based out of Tampa, Florida. With a BA in Digital Film, he co-wrote and co-directed Scavenger Hunt. His short stories have appeared in various horror anthologies. In 2019 his short script Fertile Blood will be a part of the anthology horror film Slumber Party. He is currently working on his first novel A Dark and Secret Place set to be released in late 2019. Favorite Films: Taxi Driver, Fight Club, I Saw the Devil, The Wild Bunch, Dawn of the Dead, A Clockwork Orange, Pulp Fiction, Heathers, The Monster Squad, and High Fidelity.
WWII From Space (Blu-ray) Wuthering Heights (2011)