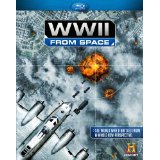 “This is America’s war as never seen before…”

When you consider the countless documentaries, miniseries and feature films dedicated to the Second World War, you’d think the defining conflict of the 20th century has been covered from every possible angle. And you’d be wrong! History has taken to the skies with WWII From Space, a two-hour special that originally aired on the cable network in December and promised to bring viewers an unprecedented, extraterrestrial perspective of the war.

I hope you excuse some of the cheekiness in the previous paragraph because, at first glance, the idea of presenting WWII From Space is only slightly less ridiculous in my mind than the concept of The Great Gatsby 3D. Space is also where franchises tend to go when they’re on their last legs. (See Jason X, Muppets From Space or Leprechaun 4: In Space; actually, it might be better if you don’t.)

Despite its attention-grabbing title, this Blu-ray release is very upfront about what’s being presented. Unlike History’s fascinating WWII in 3D Blu-ray — which unearthed mesmerizing 3D images shot in the 1930s and ‘40s — there is no secret footage from a satellite predating Sputnik. Instead, WWII From Space uses CGI to provide a satellite view of the conflict and recreate some of the war’s most significant moments that could never have been captured by a camera.

Once you get over the disappointment that there’s no secret footage from a satellite predating Sputnik (bummer), WWII From Space is a thoroughly watchable survey of the war from the American perspective. The film covers German and Japanese aggression in the 1930s, but it actually opens with the bombing of Pearl Harbor. A steady stream of military experts, professors and strategists — along with a handful of veterans — do an admirable job of condensing years of complex politics and crucial battles into a clear (if simplistic) explanation of the war. (Minus the TV special’s commercials, WWII From Space clocks in at 92 minutes.)

I actually think the “From Space” conceit ends up bogging down an otherwise interesting project. Satellite images are sporadically helpful by giving us a big picture view of the geography and stakes behind certain battles. Unfortunately, these satellite images alternately come off as high-octane weather forecasts or a high-tech game of Risk. It doesn’t help that the narrator persistently tries to force the issue by saying things like, “from space, the battle for the world’s oil reserves is revealed”, “what American intelligence cannot see is revealed from space” and “from space, the speed of advance [after the D-Day invasion] is astounding.” I’m pretty sure it was astounding on the ground too.

The CGI recreation of some of history’s best-known battles and attacks — Pearl Harbor, D-Day, Stalingrad — are solid, but they inevitably pale in comparison with what’s been done on the big screen. (There’s even a shameless rip-off of the famous bomb’s-eye shot from Michael Bay’s Pearl Harbor.) The film’s clear showstoppers — the atomic bombings of Hiroshima and Nagasaki, which obviously would’ve been visible from space — are part of a rushed conclusion mostly concerned with the way WWII marked the end of American isolationism and its rise as a military superpower. I realize this special is largely intended for American audiences, but it’s still a disappointingly narrow application of such an out-of-this-world concept.

WWII From Space is presented in its original aspect ratio of 1.78:1. The 1080p image is arrived at with an AVC MPEG-4 codec at an average of 27 mbps. There’s a lot going on here from a visual standpoint. The CGI recreations are quite impressive by basic cable standards; they successfully employ a lot of intentional grain/digital noise and purposefully-muted colors to achieve a period look. A lot of the satellite images and informational graphics look like stuff out of a high-end videogame, which is absolutely a compliment when you consider how good videogames look these days. With all this digital razzle dazzle going on, it’s probably best to use the present-day talking head interviews as a baseline for the visual presentation. The crisp image — nice detail on the faces, even though there are no close-ups — passed the test.

The DTS-HD Master Audio 5.1 track pipes up during the periodic battle recreations, including solid directionality as the sound of a plane flying travels from the front speakers to the rears. However, that stuff doesn’t happen as often as you might hope. The rears are mostly used to pump out the propulsive score. Meanwhile, the narration and talking head interviews are confined to the front speakers and come through clear as a bell.

Given that this was originally a stand-alone TV special, the lack of special features — unless you count trailers for The Hurt Locker and Apocalypse Now — isn’t too surprising.

The highly-visual nature of WWII From Space could make it a sneakily useful teaching tool for educators whose students will gravitate toward the videogame-style graphics. In other words, come for the misleading title, but stay for the solid history lesson.