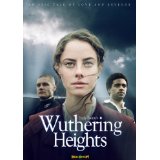 I should start by saying I just re-watched the 1939 version of Wuthering Heights with Laurence Olivier and Merle Oberon on Turner Classic Movies, and I fell in love all over again. Olivier was never more magnetic, naturalistic and appealing than he was as Heathcliff. I have watched it many times and Wuthering Heights has been done many times. There have been recent versions with Ralph Fiennes and Tom Hardy (The Dark Knight Rises, Inception). This is not one of those versions.

This version is by the adventurous — some would say radical — filmmaker Andrea Arnold. When she first started making films as a director, Arnold made shorts and won an Oscar for a film called Wasp. Both of her first two feature films — Red Road and Fish Tank — won the Jury prize at Cannes. She is a big believer in the Dogme 95 style founded by Lars von Trier, but only as a general philosophy. She does not adhere specifically to all the rules of that movement. Arnold does use the hand-held camera almost exclusively, which gives all of her films — including this one — a documentary feel. There is no music in her version of Wuthering Heights, except for those moments that are generated by the characters in the scenes (though there is a Mumford and Sons song at the end), and the film uses mostly untrained “actors.” It also hopes to shake things up by having the Heathcliff character be black.

Emily Bronte was a writer like her two sisters, Charlotte and Anne, and they all died young (at 30, 38 and 29, respectively). Their siblings — Maria, Elizabeth and Patrick — suffered similar fates, dying at ages 11, 10 and 31. Charoltte wrote “Jane Eyre” and Anne wrote “The Tenant of Wildfell Hall.” All three are considered masterpieces and two remain household names up until this day.

The story of this literary family was actually a movie called Devotion with Ida Lupino and Olivia de Havilland. Wuthering Heights has been the subject of three operas. I touch on this to reintroduce the high pedigree of this material. It is beloved.

What Andrea Arnold has done is subvert most of our expectations for this material. We are used to seeing Shakespeare tackled in modern and unconventional approaches, but never a gothic, romantic classic such as Wuthering Heights. Almost none of the beautiful dialog of the original novel is used. In fact, there is a spare use of dialog in the whole film. It is also generally spare in terms of story. Like most filmed adaptations, it excludes the next generation that is in the book, but this version uses only the barest hints of the original material, focusing almost entirely on suppressed passions and feral moments together in the hills.

If you don’t know the story, it has been told many ways. The essential heart of the matter is that Heathcliff is a dark-skinned gypsy who is brought to a manor to work as a servant and become civilized. The daughter of the master of the manor, Cathy, becomes more and more infatuated with this strange boy. Heathcliff and Cathy become inseparable despite angry bouts of mistreatment by the master’s son Hindley. During one nighttime tryst, Cathy is injured by a dog at the neighboring Linton farm. She stays there to recuperate, becomes more sophisticated, and comes to believe that Heathcliff is beneath her. Heathcliff leaves and returns years later. He is now wealthy, full of anger, and he has continued his obsession with Cathy.

There is much more to the story, and Heathcliff has been called the ultimate Byronic hero: dark and full of anger, but with deep wells of emotion. This film gets that essence, but focuses on long takes of their struggling relationship as the wind blows by on the hills.

I love the story so much that I would love any version. But if I had never seen the earlier versions, I would not have a good idea of the actual story from this adaptation. Still, when something has been done repeatedly, it is probably best to provide something different. This is different.