Kristen Schaal: Live at the Fillmore 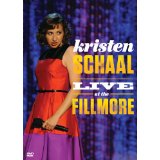 “If you have a tender soul, brace yourself.”

Sometimes I’ll get a stand-up comedy DVD and wonder how to write the review differently from other stand-up routines because there was simply little-to-no difference between the acts. Everyone just about knows — or should know — the basic formula. A guy walks out on stage and, for 45 minutes to an hour, delivers self-deprecating humor with the goal of receiving a few laughs. But then there are the comedians like Bo Burnham and Jeff Dunham, who at least try to bring something new to the stage by using music or puppets. In the case of Kristen Schaal, the mold continues to break as she delivers a stand-up performance unlike any other. This isn’t to say she delivers a perfectly amazing set, but it was refreshing to see something outside the formula of the standard routine.

Fans of Flight of the Conchords may recognize Kristen as the obsessive stalker fan of the band. In fact, that’s actually what had me looking forward to checking out her routine since I already liked her from the show. Though her humor is a bit on the blue side, Schaal’s routine plays well as a companion piece to the Conchords. Her blend of singing, dancing and interaction with the audience is enough to keep you wondering just what will she do next.

Her most memorable bit came when she did her own interpretation of “The Vagina Monologues”, but she took it a step further and described a less-talked-about region of the body. Sure it’s dirty humor for 12 year olds, but it’s still pretty funny. But the set isn’t entirely raunchy. Schaal continues to keep things fresh, re-enacting the first time she ever asked out a guy and showing us the routine she created for when she decides to audition as a magician’s assistant.

The show takes a few surprising twists as Schaal seems to have a meltdown on stage and storms off, leaving her stand-up partner to fill in. Is it an act or is the meltdown the real deal? As the uncomfortable moments tick by, it becomes harder and harder to tell. Another unexpected moment comes when a heckler rushes the stage and takes the microphone from Schaal. The result shows that Schaal knows exactly what she is doing and knows how to play her audience like a mad, comedic, almost-genius.

For those who want more from Schaal, the DVD also comes with other performances the comic has done for Comedy Central.  Overall, this is a nice little package that is worth checking out for those that are fans of Schaal or off color stand-up in general.

Brent Lorentson is a horror writer and film critic based out of Tampa, Florida. With a BA in Digital Film, he co-wrote and co-directed Scavenger Hunt. His short stories have appeared in various horror anthologies. In 2019 his short script Fertile Blood will be a part of the anthology horror film Slumber Party. He is currently working on his first novel A Dark and Secret Place set to be released in late 2019. Favorite Films: Taxi Driver, Fight Club, I Saw the Devil, The Wild Bunch, Dawn of the Dead, A Clockwork Orange, Pulp Fiction, Heathers, The Monster Squad, and High Fidelity.
Wuthering Heights (2011) Room 237