Posted in: The Reel World by Archive Authors on May 8th, 2013 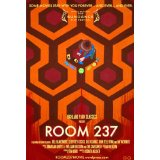 The first question you have to ask: “Was Stanley Kubrick a genius?” There are those who assert his IQ was ridiculously high (200+). Kubrick himself replied that he was below average. I tend to agree with the former rather than Kubrick himself. Kubrick is a monumental legend in film history. I personally think he is the single greatest director of all time, but I say that with a little reservation. There are hundreds of directors who I admire and think are deserving of high praise, but Kubrick’s incredible mystique is what raises him above the rest. You can question his shifting subjects and styles as well as his sporadic output, but he is ultimately a source of endless discussion. That is the ultimate test of greatness. How long can you talk about someone? If you take the example of Room 237, you can talk about Kubrick endlessly.

Room 237 is the in-depth examination of Kubrick’s 30-year-old film The Shining that has received rave reviews. Why would a documentary of a 30-year-old film get so much attention? Because it’s fascinating, fun, mystifying and a clear example of the mystique of Kubrick. Room 237 is basically six well-educated but somewhat obsessive commentators outlining and diagramming minute details to reveal hidden messages.

The Shining was an adaptation of a Stephen King bestseller, and it is well known that King was not happy after the film came out. Kubrick took the story and molded it to suit his own mysterious motives. And when I say “mysterious”, I mean just that. And when I say “hidden messages”, I mean just that. I always thought it was ridiculous that King would take such a combative attitude to an established giant. It’s not as if the films from his books have ever had a great track record. King simply didn’t understand what Kubrick was doing. Apparently, none of us did.

I think the most telling analysis of the film is in Room 237’s discussion of subliminal seduction. Subliminal messages in advertising were popular in the days that The Shining was made, and it is well established that Kubrick researches things beyond exhaustion. Kubrick took the King book and used it as a foundation on which to build upon. I personally don’t think he diverged much from the story; Kubrick simplified parts of the novel while expanding on other themes and ideas. He also added a ridiculous amount of layers. These are layers that are not easy to see. In fact, the story is on the surface and the layers are underneath.

The second big question you need to ask about Room 237 is whether you can believe anything that is shown. I’ve watched it a few times and I believe them. In fact, I think the film just scratches the surface. It’s been a long time since I’ve seen anything that has so excited my mind with possibilities.

I will take a moment to say that the majority of filmgoers will probably come away from Room 237 scratching their heads. It’s an itch that needs to be scratched. Kubrick was doing nothing less than tackling one the most expansive subjects imaginable: the history of the world. It’s not the first time he had done this. You could say he did the same thing with 2001: A Space Odyssey, but in a slightly more obvious way. In The Shining, Kubrick takes a small family unit alone in a historical hotel to crazy extremes.

All that being said, some of the commentary — while interesting — is harder to believe, such as the controversial assertion that Kubrick faked the moon landing. But even that has clear evidence and clues that can’t be ignored.

Normally I would struggle to find something interesting to say about a film, but in this case I had to stop myself. I have made the introduction and whether you become a member of the cult of The Shining is up to you. As I said earlier, Room 237 seems to have just scratched the surface. When the DVD finally arrives, I would be disappointed if it didn’t have at least 10 hours of extras.

Kristen Schaal: Live at the Fillmore Flashpoint: The Fifth Season