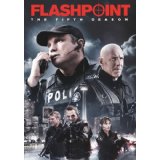 After a four-month hiatus, I have been called to assignment, a very special assignment indeed. Thankfully, the message did not self-destruct after five seconds. However, the message did have demands and required negotiation tactics. That is when I called in the SRU Unit from the show Flashpoint and they burst onto the scene. While they are handling a memo that has a notebook at gunpoint, they left me with a copy of Season Five of Flashpoint to review. Let’s take a look.

Season Five of Flashpoint in U.S. terms are the first eleven episodes under the ION Television banner (though the dvd package is still put out by Paramount/CBS). In Canada, these are the last eleven episodes of season four. The last thirteen episodes of the series will hopefully be in a Season Six package later this year (and Canada will have it as Season Five). Got it? Good.

Somewhere on a plane nearing Toronto, Geoff Daikin (played by Shaun Benson) gets back from the bathroom and passes a bulky newspaper to fellow passenger, Richard Freiberg (played by Alden Adair) and they nod at each other. Meanwhile, in another seat, Holly McCord (played by Melanie Scrofano) watches as her daughter drops a cell phone and can’t quite get to it. The plane is ready for landing.

The two men, Geoff and Richard are looking nervously at each other. As soon as one of the flight attendants comes to them and asks for them to put on their seat belts, the two men pull guns and hijack the plane. They tell them that they are going to make an unscheduled stop and then make the threat that there are others on the plane who are also part of this plan. They do not want any heroes.

As it turns out, where they touch down is in the jurisdiction of the SRU response team lead by Gregory Parker (played by Enrico Colantoni). There has been no word from any of the seventy five passengers and Greg tries to talk to the pilot and see if he can get additional information. It is around this time that Geoff, still on the plane, calls in his demands. He wishes the release of his comrade; Bernard Moore (played by Drew Nelson) who is sitting in a Federal Prison for shooting a police officer.

Bernard also happens to be within twenty minutes of the airport, so Geoff gives the SRU team thirty minutes to make it happen. Greg tells his teammate, Jules Callaghan (played by Amy Jo Johnson) to go find out all the information she can on Bernard Moore. Meanwhile, three other members of the team, Ed Lane (played by Hugh Dillon), Sam Braddock (played by David Paetkau) and Raf Rousseau (played by Cle Bennett) test out strategy in a nearby identical craft.

After some digging, Jules finds out that Bernard Moore is part of the Free Citizen’s Group, a group that believes in its own laws and does not follow any state or country charter. They are also able to obtain the name of the hijacker as Geoff Daikin (this had not been revealed until now) who is also part of the same group. The real story is revealed later by Bernard himself which paint the group in a slightly more sympathetic light.

At this point, the two hijackers are starting to get restless. However, Greg is able to talk them into a compromise of letting fifty of the passengers go in exchange for Moore. Soon, the exchange is ready to happen and as they count off the fifty passengers, there appears there might actually be a hero or two on board after all. This somewhat peaceful exchange is about to become a deadly game for all parties involved.

The season doesn’t just stop there, we get ten more episodes which include a variety of subjects including Chinatown gangs, a hostage situation at Fletcher Stadium, and a deadly anthrax scare among others. In addition, two team members are discovered to have a renewed romantic relationship which can have severe consequences to the whole team. These episodes give us fans more of what we have come to expect, high intensity situations where no outcome is certain and edge of our seat action.

One thing that is still present in these episodes is the huge sense of human emotion. Even if some of the situations are a little hokey, one can honestly see that the SRU team gives it one hundred and ten percent and come out with the best solution available. Everybody in the team is generally likable and the bad guys often come with shades of grey. Nothing is black and white, but that is exactly what we as viewers have come to expect.

The show also has a great habit of feeling very timely. If there is a current event that can be related back to a kidnapping/hijacking/global scare ordeal, they usually find a way to write it into a Flashpoint episode. The show often feels like it was just ripped from today’s headlines. It is a darn shame that this never quite caught on in the United States as it should have.

The show officially ended on December 13th, 2012. After seventy five episodes, it was time to call it quits and despite it not making the magical one hundred for the ole syndication racket, I think it was still a really good show. Also, very important to fans but the show ended cleanly from what I heard. A lot of shows, especially cancelled ones don’t usually get that luxury.

This dvd set of eleven episodes is a classic case of awesome material but minimal treatment by the studio. Unfortunately there are no extras anywhere, not even a couple of trailers. I really hope that we do not have to wait another year for the last set of thirteen episodes and that just maybe we get a couple of commentaries on that set, especially with the last episode. It would be awesome to hear from the cast one last time as they pay tribute to a great show. Recommended to fans of Flashpoint everywhere.

Michael Durr has been reviewing movies for the better part of fifteen years now. He primarily enjoys thrillers, sci-fi, animation and even a little courtroom drama. His favorite films include Escape from New York, the Goonies and anything with Alyssa Milano. When he’s not praising Kurt Russell as the greatest actor of our time or scratching his head over a David Lynch flick, he’s spending time at home in Texas with his lovely wife, Lori and his amazing son. How they put up with him is a mystery, but even Basil Rathbone doesn’t have the time to solve that one.
Room 237 James A. Michener’s Texas