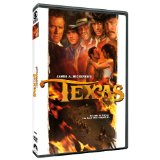 Texas. Just the name of our nation’s second-largest state evokes images of cowboys, gunfights, scenic vistas, and much more. Few states have the combination of history, natural beauty and colorful characters that Texas does. These factors have provided a wealth of stories, and James A. Michener’s Texas (based off Michener’s best-selling novel) recounts one of the most tumultuous times in the state’s history.

It’s 1821, and Stephen Austin (Patrick Duffy, TV’s Dallas) has been hired by the Mexican government to find 300 families to settle in Texas. This attracts many people, including Maddie Quimper (Chelsea Field, “Wicked”) and her stepson Yancy. At first, life in Texas is hard but rewarding, with many native Mexicans — like Mustang trainer Benito Garza (Benjamin Bratt, Snitch, TV’s Law & Order) — embracing the immigrants and even intermarrying with them. However, the Mexican government’s oppressive laws on land ownership and immigration soon breed resentment. The people of Texas must decide which side they are on: do they submit to the rule of General Santa Anna, or do they follow Sam Houston’s (Stacy Keach, American History X) lead and try for independence?

The first thing that struck me about this film was the scenery. I was surprised at how sharp and clear it looked for something filmed in 1994. With the exception of a couple of shots of the Mexican army forming up, this looked like something filmed only a few years ago (not almost twenty). I especially loved the scenes of the battle at the Alamo. The bright colors of the Mexican army provided a stark contrast to the dirty and dusty clothes of the ragtag group of men defending the mission. The explosions hit so close to the camera, I was ready to duck and cover. With surround sound, I really felt like I was fighting with Jim Bowie (David Keith, An Officer and a Gentleman), Davy Crockett (John Schneider, TV’s The Dukes of Hazzard, Smallville), and the other brave men who died there. The natural beauty of the state is allowed to shine in this film as well. Long, sweeping panoramic shots during scene transitions keep you engrossed in the film and almost steal the scene from the actors.

For the most part, the acting in this film was really good. Schneider and Keith are underutilized as Crockett and Bowie, really bringing these folk heroes to life. Bratt’s Benito Garza is impressive as a man torn between his country and the woman he loves. His inner conflict is evident in every choice he makes, and keeps the viewer from totally hating him. Anthony Michael Hall (TV’s The Dead Zone) is almost unrecognizable with a mullet and a hick accent as grown-up Yancy, but does an excellent job, especially in the scenes with his childhood friend Otto McNab (Ricky Schroeder, TV’s Silver Spoons, Lonesome Dove). The two stars from the ‘80s have some of the most emotional scenes in the film and their great chemistry together makes them even more intense. The real star of this film is Keach, whose portrayal of Sam Houston is amazing. The transformation of Houston from a despondent, drunkard governor to the man who became the first President of Texas is stunning. I found myself riveted to the screen every time Houston was on, even when he wasn’t saying anything.

Unfortunately, two of the lead roles were horrible miscast. Duffy’s portrayal of Austin is stilted and pained. He looks as if he’s constipated the entire time. Field is also pretty bad as Maddie. Her accent changes several times, and she just doesn’t have that toughness or spark to play a woman who traveled all the way to Texas by herself after her husband died. The only enjoyment I got out of these two was watching their awkward kissing scenes. I don’t think I’ve laughed that hard in a long time. It was like watching two middle schoolers having their first kiss every time.

While containing a few soap opera-esque elements, it actually works for a story as big as the independence of Texas. While I wished it had focused more on the Battle of the Alamo (I love war stories!), the film does a great job of showing how Texas became a part of the United States. I also liked and appreciated that the story wasn’t totally focused on the North Americans. It presents the reasons why both sides went to war, providing a more complete film. I wholeheartedly recommend this, especially for those who love history and the Old West.

Flashpoint: The Fifth Season The Wicked