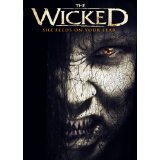 “Season of the equinox, the witch besets her kill; one last soul, the town to know taken against their will.”

I’m not the type that scares easy, and I’m not overly superstitious. But when it comes to urban legends, I know there are a few things I never intend to do: I never intend to say “Bloody Mary” three times in the bathroom mirror, I never intend to mix Pop Rocks and Coke, and, if there is a legend about a witch that will come after you if you break one of windows of her house, guess what? I won’t be picking up a rock. Mind you, this is less about fear and more about having no desire to deal with the consequences if I’m wrong. If only the teens of The Wicked shared my views.

In the small town of Bogie Lake, there is the tale of the Wicked. We learn the Wicked is a witch who lived in Open Hearth, a house in the woods outside of town. Legend says her coven was burned at the stake by witch hunters, but she survived by eating children; she ate the little ones to keep her young, she ate the older ones to keep her strong, and she ate the pretty ones to keep her beautiful. One of the high school senior traditions in town is to go up to Open Hearth and pitch rocks at her house; if you throw a rock at the house and don’t break a window, you are safe. But if you do, the Wicked will come for you, and you will never be heard from again.

The tale of the Wicked begins to circulate around town and is fueled by the recent abduction of local child Amanda from her bedroom. Though the Wicked tradition hasn’t been done in years — ever since a senior who participated in the prank went missing — Zach (Justin Deeley) along with his friends Carter (Chase Maser), Tracy (Jackelyn Gauci), and new girl/potential crush Julie (Jess Adams) decide to continue the ritual. The group is followed by Zach’s younger brother Max (Devon Werkheiser) and his friend Sammy (Diana Hopper), who are looking to score blackmail material on Zach.

They all arrive at Open Hearth and, in true teenage ignorance, cast stones at the house. Of course, one of them shatters a window, awakening the Wicked. Believing it all to be no more than good fun, the group makes camp for the night. Later that night, the group finds evidence that leads them to suspect that Amanda — the missing child — is trapped in the house, and they decide to rescue her. While trying to escape, the group finds itself face-to-face with the legendary witch and escape becomes an impossibility.

If you’re a seasoned veteran of the horror genre, The Wicked is guaranteed not to scare you. Hopefully, it will manage to entertain you. For what it lacks in hair-raising suspense and a villain that actually strikes terror in the audience, it does partially make up for in unique storytelling. There are a few interesting characters along with some character growth, mostly on the part of Deeley. Zach starts the film as your basic rebellious teenager with a bit of a mean streak that you so often can’t wait to see die. However, by the film’s midpoint, the character becomes more likable and you no longer wish for his death (or perhaps you still desire it, depends on who you are). Adams — as Zach’s love interest — and Hopper — as Max’s love interest — each do a quality job of making their characters noticeable; Julie is the extraordinarily gorgeous girl with a heart of gold, while Sammy is a standoffish, cute tomboy who is usually mistaken for a lesbian. Unfortunately, their roles in the overall film are downgraded exponentially halfway through the movie to focus on the brothers’ attempt to escape.

Speaking of the brothers’ dynamic, their relationship provides the substance of the entire film. They start off as adversaries wishing each other dead, but become allies, working together against the witch that intends to devour them. Deeley and Werkheiser do a good job of selling the relationship, almost making you forget the lack of family resemblance. Almost.

I can honestly say throughout the film’s duration, it did not manage to make me jump once. But I can tell you what else didn’t happen, I never got bored. So, scary movie it is not; entertaining, however, it is.

Jeremy Butler is a film school graduate of the International Academy of Design and Technology. He is been writing for Upcomingdiscs since 2012; however, movies have played a big part of his life for much longer. Favorite genres include horror, science fiction/fantasy, and comedy. Favorite movies are V for Vendetta, Boondocks Saints, Kiss Kiss Bang Bang, and The Godfather.
James A. Michener’s Texas The Great Gatsby (2013)