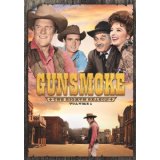 The two season halves have been released at the same time. It offers you the opportunity to buy it all together, and why wouldn’t you? You get 38 episodes on 10 discs total. Highlights from the season include: In Quint Asper Comes Home Matt has to head off a feud out of control when an Indian half-breed goes after the men who shot his father. The Comanches are about to go to war if Matt can’t stop the fuse. In Root Down Chester is the target of a drifter’s daughter who is looking for a husband. That gets Chester in hot water with the girl’s father after she tells Pa that she spent the night with the unsuspecting Chester. In Jenny a bank robber’s girl fakes an affair with Matt in order to get him killed.

This was a pretty big season for the long-running Western. Burt Reynolds joins the cast as Quint Asper, Dodge City blacksmith. Ken Curtis also joins the show as the popular Festus. He’s not a regular yet, but he got in his first episodes in season 8. It’s still one of the best of the old-time television westerns. It holds up even today.  “You know what they say, there’s been many a good tune played on an old fiddle.”

Gino Sassani is a member of the Southeastern Film Critic's Association (SEFCA). He is a film and television critic based in Tampa, Florida. He's also the Senior Editor here at Upcomingdiscs. Gino started reviewing films in the early 1990's as a segment of his local television show Focus. He's an award-winning recording artist for Omega Records. Gino is currently working on his 8th album Merchants & Mercenaries. Gino took over Upcomingdiscs Dec 1, 2008. He works out of a home theater he calls The Reel World. Favorite films: The Godfather, The Godfather Part II, The Body Snatcher (Val Lewton film with Karloff and Lugosi, not the pod people film), Unforgiven, Gladiator, The Lion King, Jaws, Son Of Frankenstein, The Good, The Bad And The Ugly, and Monsters, Inc.
Have Gun Will Travel: The Sixth and Final Season, Vol. 1& 2 Safe Haven (Blu-ray)