Have Gun Will Travel: The Sixth and Final Season, Vol. 1& 2 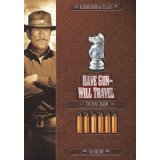 Those words ended every episode of Have Gun Will Travel, sung by Johnny Western in a time that such words could be sung without irony. Outside of Richard Boone’s black-clad, craggy Rhett-Butler-gone-to-seed gunfighter, that song was all I could really recall about this venerable Western from television’s golden age. Would it, like so many revisited shows from my youth, ultimately disappoint? Or would it hold up fifty years after it was originally broadcast, viewed as it would be by the far more jaded, cynical man I’ve grown into?

Now, just to set the record straight, I wasn’t even born until Have Gun Will Travel had been off the air for at least a year. However, during my teen years, it was a staple of a late-night revue show on one of my local television stations. I spent many a night staying up until three in the morning watching it, along with other classics like The Twilight Zone, The Honeymooners, and The Fugitive. Shows with that kind of personal history are inevitably remembered in a bubble of nostalgia that can be quickly popped when viewing them so many years after they were relevant and edgy. Last year I started re-watching The Twilight Zone and was pleasantly surprised how well it plays now. Some aspects (and some episodes) are still clunky, and if Rod Serling wrote the dialog, you knew that some of it would be laughably stilted, but the stories are still awesome, the direction is tight, and the acting, while often stylized, is generally quite good.

The final season had a few big moments to look forward to seeing again. CBS has released both halves at the same time, so you can get all 32 episodes on four discs. We get a look at Paladin as a young man in Genesis. He survives an attempt to kill him and begins to remember how he was set on the course his life has taken. In The Fifth Bullet Paladin convinces a man to give himself over to the law for a fair trial. Eight years later he must see the man safely home from his prison sentence. In Bob Wire a job of protecting a shifty salesman puts Paladin in the middle of a range war.