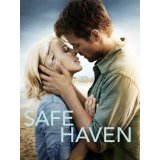 Even among the crowded field idyllic meadow of big-screen romances, the “Nicholas Sparks movie” has become its own lucrative sub-genre. The only other contemporary authors I can remember achieving that sort of name brand recognition are Stephen King and John Grisham. (When people went to watch a Harry Potter film, they didn’t usually say, “Let’s go see the new J.K. Rowling movie.) It’s easy to spot a Nicholas Sparks movie: the lily white leads usually live in or around one of the Carolinas, where they inevitably get drenched by a romantic, cleansing rain before coming across a pivotal letter.

The fact that Safe Haven hits every single one of these checkpoints should, in theory, make it the ultimate Nicholas Sparks movie experience. Instead, the new film — the eighth big-screen adaptation of the author’s work — comes off as a pale imitator.

Katie (Julianne Hough) is a woman on the run. When we first meet her, she’s covered in blood and deliriously clutching a knife. After barely escaping the clutches of an overzealous Boston P.D. detective (David Lyons), she winds up in sleepy Southport, N.C. Katie is still haunted by her past trauma, but she gradually finds the relaxed pace of small-town life attractive. You know what else she finds attractive: the hunky single dad (Josh Duhamel) who runs the local convenience store with plenty of help from his impossibly cute daughter (scene-stealer Mimi Kirkland) and zero assistance from his annoyingly-grumpy son (Noah Lomax).

Eventually, Katie’s past catches up with her; unfortunately, the past takes it sweet time to get there. Simply put, the first hour of Safe Haven is pretty brutal. After the urgency of the opening scene, we get only glimpses of what made Katie go on the run. (A lot of the tension is inherently sapped because it quickly becomes obvious Katie is no homicidal maniac.) That means not a heck of a lot happens for the first half of the movie as we watch single dad Alex romance Katie very tentatively — we learn through a clumsy bit of exposition that his wife died of cancer years earlier — and Katie adjusts to life in Southport (with an assist from a curiously nosy neighbor played by Cobie Smulders).

Director Lasse Hallstrom (Chocolat, Salmon Fishing in the Yemen) has an eye for picturesque romances — everyone in Southport is practically bathed in rim light — and even proved his Nicholas Sparks bona fides by adapting 2010’s Dear John. I know I’ve poked fun at a lot of the conventions in the author’s work, but I’m definitely not immune to its charms. (I’ve watched The Notebook more times than I care to admit, and my, um, allergies mysteriously started acting up during the final act of A Walk to Remember.) So maybe the fact that a lot of the plot machinations in Safe Haven have become a joke has less to do with the material itself and more to do with the notion that we’ve seen all this before. (Thinking) Nah! Hallstrom — along with screenwriters Leslie Bohem and Dana Stevens — should’ve found a way to punch up the film’s first act or add some shade and dimension to these characters.

Unfortunately, the performers don’t exactly elevate the material. Duhamel is likable enough and certainly looks the part of a male romantic lead, but Alex’s defining character trait is that he stinks at opening doors. Hough is even worse. The former pro dancer showed a ton of star quality on Dancing with the Stars, but that charisma simply hasn’t translated to the big screen, and I don’t understand why she’s been granted leading-lady status. (Especially not in a drama; her snagging the lead in music-oriented projects like Footloose or Rock of Ages makes sense.) Don’t get me wrong: Hough looks smashing in the shorts Katie prefers, but she simply doesn’t have the dramatic presence to hold the audience’s attention. Katie winds up acting as a surrogate mother to Alex’s kids, but she comes off more like their older sister or hot babysitter. (Keira Knightley reportedly turned down the lead role.) Meanwhile, David Lyons is stuck acting in a grimmer, less sun-kissed movie. He starts off in obsessed, Inspector Javert mode before his cop morphs into a character from the worst Tennessee Williams play ever.

Safe Haven is presented in its original aspect ratio of 2.40:1. The 1080p image is arrived at with an AVC MPEG-4 codec at an average 35 mbps. The best word I could use to describe the high-definition image presentation is inconsistent. There are too many moments where the image exhibits digital noise or the blur effect that often indicates DNR overuse. The image is often soft and fuzzy. That’s not to say there aren’t good moments. There’s a beautiful sunset that gives an indication of the kind of presentation this could have been. Close-ups are usually very sharp with good detail and color. The locations are actually a highlight of the film, but it’s just too often spoiled here.

The DTS-HD Master Audio 5.1 is appropriately subdued. The dialog is serviced well here and placement appears spot-on. The score is rich with soft tones, often acoustic guitar. It’s a subtle and often quiet score that is very rich and full at the same time. It’s the best part of the film, in fact. Don’t look for aggressive surrounds. That kind of ear candy would only intrude.

Deleted Scenes: (5:19) There are five with a handy play-all option. Nothing here that offers you any insight or would have made the film any better.

Alternate Ending: (3:37) It’s not a different ending but rather an alternate version of the letter Katie reads at the film’s conclusion.

Igniting The Romance In Safe Haven: (9:15) This behind-the-scenes feature focuses on the large amount of improv the actors contributed to the film. There’s the expected cast and crew reflections.

Josh Duhamel’s Lessons In Crabbing: (3:05) The actor tries some crabbing from the location pier. He doesn’t have a lot of luck.

The film lurches to a blazing climax before a surprisingly affecting conclusion. But by then, it’s too late. Safe Haven has all the elements of a Nicholas Sparks tear-jerker, but my tear ducts were not properly jerked. (At best, they were mildly teased.)

Gunsmoke: The Eighth Season, Vol. 1& 2 Once Upon a Time in Brooklyn