Posted in: Disc Reviews by Brent Lorentson on May 15th, 2013 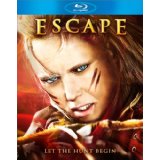 In 1363, the Black Plague had done its damage, leaving most infected areas uninhabitable. Escape — known in Norway as Flukt — is the story of a family that sets out into the countryside to get away from the plague and hopefully find a new place to rebuild their lives. But just as I’m thinking this is going to be a movie about sticking together and fighting to survive the elements, it shifts gears to something far darker but not all that original.

The small family is attacked and most are brutally slain; only Signe (Isabel Christine Andeasen), the daughter, manages to survive. Instead of simply killing the girl, the attackers decide to keep her around. When this decision was made by the attackers my mind instantly went to thinking they were going to torture and rape the girl. It seems extreme, but after seeing these attackers shoot down a young boy with a crossbow, well it should be safe to assume these killers are ruthless. Insert twist; back at their camp they have a little girl named Frigg. It seems all they want is for Frigg to have a sister.

To garner a little sympathy for the killers, who are led by Dagmar (Ingrid Bolso Berdal), we learn that all Dagmar seems to really care about is being a mother. Unfortunately, Dagmar can’t have any kids and she’s had to resort to kidnapping to fill that maternal need that is overwhelming her. Had she not just killed a young boy 10 minutes earlier, then maybe we could have shown a little compassion for Dagmar. Instead, this only makes her out to look more insane and capable of anything.

Frigg clearly is nothing like the gang of killers and completely separates herself from them when aiding Signe in her escape. Unfortunately, what follows is a by-the-numbers, cat-and-mouse game in the woods as the two girls try to get away from the gang of killers. Though the time period and beautiful scenery allow the film to feel fresh and exciting at times, sadly these moments don’t last long.

The film feels like it wants to be this bleak, dark tale of survival against the odds, but it simply doesn’t take the chances needed for us to really fear for these girls. It’s obvious they are in a land without rules and where survival is a challenge (even without killers hunting you down). But everything comes too easily for the girls, there is never a true moment of peril, even when a character takes a swan dive off a cliff — which in the real world would kill any other person — we know the character is okay. That’s the problem; we shouldn’t know everything is going to be okay and turn out fine and dandy like some episode of Gook Luck Charlie.

Escape is presented in an aspect ratio of 2.40:1. The 1080p image is arrived at with an AVC MPEG-4 codec at an average of 30 mbps. Despite being a by-the-numbers kidnapping flick, the film does manage to look good. Scenes around the campfire at night give us a good amount of detail, but still allow it to be believable that the only light is from the little campfire. In one of the bonus features, we get a glimpse at how they pushed up the beautiful color in the backgrounds where sometimes they were shooting on green screen. I never would have known, if not for the bonus feature. The texture of the film is very cold and, with the wide shots surrounding our protagonists with endless trees, it allows the viewer to at least believe they are trapped in the middle of nowhere.

The DTS-HD Master Audio 5.1 track comes in the original Norwegian language, but only 2.0 Dolby for English. For those that don’t mind subtitles, I’d recommend viewing with the Norwegian track because the dubbing for the English track is comical at best. Listening to the way the track dubs hits and simulates choking is the fastest way to pull the viewer out of the moment. The original track offers a nice balance that relies heavily on ambient sound. There really isn’t much dialogue. When there is dialogue, it’s clear and only in another language, so hurray for subtitles. The music is a bit forgettable, but is still better than the dubbed track.

There really isn’t much in the name of special features, but here they are. All of the bonus material is presented in HD.

Visual Effects: (2:40) A brief montage of scenes through the various stages of developing the special effects. We see everything from how they faked some elaborate backgrounds to a few kills in the film.

Deleted Scenes: (5:41) A collection of scenes that seem to all involve characters sitting around talking about nothing that furthers the plot.

Bloopers: (1:51) A brief montage of moments with blown takes due to people falling or simply laughing for no apparent reason.

For those that are looking for something to put on while doing the laundry — or if you simply can’t sleep — this isn’t a bad film to just throw on. But if you’re looking for excitement and a film that keeps your heart racing, well this isn’t the one you’re looking for. It’s not that it’s a bad film, because it’s not; the problem is it simply brings nothing new to the genre, and it’s more of the same of what we’ve already seen.

Brent Lorentson is a horror writer and film critic based out of Tampa, Florida. With a BA in Digital Film, he co-wrote and co-directed Scavenger Hunt. His short stories have appeared in various horror anthologies. In 2019 his short script Fertile Blood will be a part of the anthology horror film Slumber Party. He is currently working on his first novel A Dark and Secret Place set to be released in late 2019. Favorite Films: Taxi Driver, Fight Club, I Saw the Devil, The Wild Bunch, Dawn of the Dead, A Clockwork Orange, Pulp Fiction, Heathers, The Monster Squad, and High Fidelity.
Star Trek: The Next Generation – Season Three (Blu-ray) Have Gun Will Travel: The Sixth and Final Season, Vol. 1& 2