Witness: A World In Conflict Through A Lens 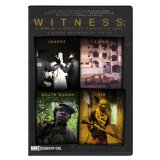 Ever flip through the pages of a magazine, or perhaps some electronic device where you read your daily world news, and wonder how they got that picture?  Maybe on CNN or Fox News you caught a report from behind enemy lines or in some hellish city where Anderson Cooper or Bill O’Reilly would never be caught without an armored escort.  Instead the stations rely on a group of brave (or insane) individuals to cover the stories and deliver the video and images needed to hit the audience with shock and awe.  What Witness: A World In Conflict Through A Lens delivers is an inside look at the life and risks these men and women take every day so they can capture a moment for the world to see, but unfortunately the world seems to also ignore.

The four-part HBO documentary is cold and unflinching.  What we get is by no means sugar-coated or filtered, and it’s because of this honest look at life in four separate hellish locations that it will be hard for some to handle.  I’m going to come out and say from the start that this documentary not only sobered me to the reality of the world around us, but damn, did it make me feel lucky to be American.

The DVD gives you the option to play all or simply watch one part at a time.  I had initially planned to watch this in one sitting, but I have to admit I wasn’t prepared for how emotionally draining this documentary would be.  I’m not saying this is a film where it had me reaching for the tissues, but instead it floored me by how people could stand around watching a man die as he bled out on the street or listening to a young boy try to recall how many people he had killed but couldn’t remember.

Covering Juarez, Libya, South Sudan, and Rio, the documentary gives us these unblinking looks as the photo journalists walk the violent streets or extreme poverty-stricken areas or traverse thick jungles simply to get a few shots.  Though we get to watch from the safety of our living rooms, you can’t help but feel the tension and develop concern as these journalists find themselves in truly terrifying violent situations where instead of fleeing gunfire, they raise their camera and start shooting photos.

Produced by Michael Mann (Thief and Heat) and David Frankham (who also directs three of the episodes), Witness goes beyond the television-friendly version of what is going on in these locations.  The camera work is incredible as we are along for the ride with these journalists.  Throughout each episode we get to see the photos that these men, and woman (oh, and did I mention as she hiking through the jungles of South Sudan she’s also pregnant?).  Each photographer has their own personal reason for why they are willing to put their lives on the line, and we get to watch as their resolve is tested and at some point they each question themselves, “Is it worth it?”  One of the most haunting moments for me came in the Rio segment, as the journalist is hiking across a field to speak with a group of drug dealers and as a passing comment he mentions to the cameraman (paraphrasing here) his concern that at any moment he’ll have a tire thrown over him.

For those of you who enjoyed City of God, Traffic, or The Last King of Scotland, I feel this should be a must-see for you.  This documentary isn’t for everyone.  The violence is real, the stories are intense, and seeing some of the brutality in this film can be a bit much for some.  But for those willing to push themselves and give this documentary a chance, I believe you’ll come away from this with perhaps not a different opinion on these countries and their politics but have a newfound respect for those that have to live their lives in these places with no escape where every day of survival is a double-edged blessing.

Brent Lorentson is a horror writer and film critic based out of Tampa, Florida. With a BA in Digital Film, he co-wrote and co-directed Scavenger Hunt. His short stories have appeared in various horror anthologies. In 2019 his short script Fertile Blood will be a part of the anthology horror film Slumber Party. He is currently working on his first novel A Dark and Secret Place set to be released in late 2019. Favorite Films: Taxi Driver, Fight Club, I Saw the Devil, The Wild Bunch, Dawn of the Dead, A Clockwork Orange, Pulp Fiction, Heathers, The Monster Squad, and High Fidelity.
True Blood: Season Five (Blu-Ray) Dexter: The Seventh Season (Blu-ray)